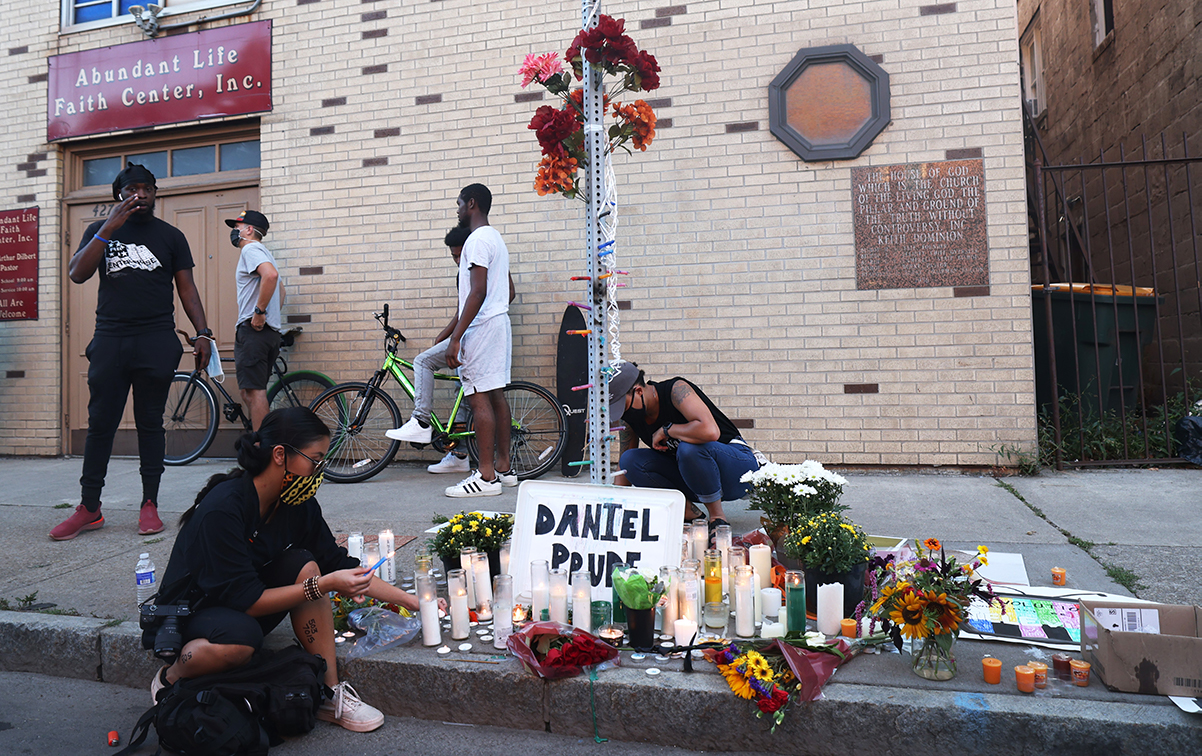 People light candles at a makeshift memorial for Daniel Prude on September 03, 2020 in Rochester, New York. Prude died last year after being suffocated during an arrest while experiencing a psychiatric emergency. Photo by Michael M. Santiago/Getty Images.

By all accounts, in the early morning hours of March 23 last year, Daniel Prude, a 41-year-old Rochester, New York, man, was having a psychotic break. Prude’s fate was sealed after his brother, trying to help, called 911. Police responded by handcuffing the naked Prude, pinning him to the ground and suffocating him to death.

“Mr. Daniel Prude was failed by our police, our mental health care system, our society, and by me,” Rochester Mayor Lovely Warren said during a press conference about the incident.

Over the past year, the use of 911 calls to dispatch police in psychiatric emergencies is coming under long-overdue scrutiny, and momentum is building to divert these calls to mental health crisis teams. Such reforms, advocates say, could have prevented interactions with law enforcement that ended the lives of Prude, Nicolas Chavez, Walter Wallace Jr., Angelo Quinto, Deborah Tanner, and countless others who were met with weapons rather than psych care.

People with untreated serious mental illness are 16 times more likely to be killed during an encounter with the cops than other civilians, according to research by the Treatment Advocacy Center, a national nonprofit supporting treatment for severe mental illness. The reason: Cops are usually not trained to adequately identify or  understand psychosis. Rather, their training tells them to react to every encounter as a potential threat.

Justice reform and mental health advocates say sending mental health crisis teams to deal with psychiatric emergencies would save lives, although making widespread reforms like this one would likely strain mental health resources.

According to a 2017 survey of police and sheriff’s departments, 10% of law enforcement budgets were spent responding to people with mental illness.

Responding to the shooting of 13-year-old Linden Cameron, a boy with Asperger’s syndrome who was shot  and seriously injured by a police officer in Salt Lake City last year, Utah recently passed a law creating a council to devise standard training for police crisis intervention teams statewide. More often, initiatives to divert police from psychological crises calls are happening at the city level. Last month, New York City announced the expansion of a six-month pilot program to reroute some of the more than 150,000 annual mental health calls from police officers to mental health experts and EMS. “We’re now convinced that this approach is going to work citywide,” Mayor Bill de Blasio said of the program during a recent budget briefing. A senior advisor to the mayor, Susan Herman, said that the city will continue to strengthen crisis prevention and establish a “health centered approach.”

De Blasio’s noting of this change in a budget meeting is significant. Law enforcement around the country is beginning to see reform in this area through a cost saving lens. According to a 2017 national survey of police and sheriff’s departments, 10% of law enforcement budgets — over $900 million nationally — were spent responding to people with mental illness, accounting for more than 20% of total law enforcement staff time.

Measures to move cops away from intervening in mental health crises largely have the backing of city leaders and law enforcement. Praising New York City’s launch of its pilot program in November, Police Commissioner Dermot Shea said officers “applaud the intervention by health professionals in these nonviolent cases and as always stand ready to assist.”

In the wake of outrage over Daniel Prude’s death, the city of Rochester is sending the Person in Crisis Team, not police, to mental health crises. Denver, Albuquerque, and Portland, Oregon, are also moving toward unarmed response for mental crisis calls. In Los Angeles, the LAPD’s Mental Evaluation Unit  has for years been using two-person teams of clinicians and officers to de-escalate crises, but the department recently launched a pilot program to divert more 911 calls to crisis counselors and get teams into the field faster.

Some cities are using a program established 30 years ago in Eugene, Oregon, as a model. The program, Crisis Assistance Helping Out On The Streets (CAHOOTS), launched by Eugene’s White Bird Clinic in 1989, consists of a medic and a crisis worker, neither carrying weapons.

“If someone shouts in the streets, the response is to call the cops. Mattress on the sidewalk? Call the cops. We have to get out of that mindset.”

CAHOOTS received around 24,000 calls last year, and teams requested police backup only 150 times, according to Tim Black, director of consulting at White Bird Clinic, who said he’s getting more calls from cities of all sizes to help divert police from “quality of life” and mental health calls.

“If someone shouts in the streets, the response is to call the cops,” Black said. “Mattress on the sidewalk? Call the cops. We have to get out of that mindset.”

But if mental crisis teams appear to be an obvious way to save money, time and especially lives, why has it taken so long to take police out of the picture? According to Black, public awareness and pressure to change — and a year of protests over police violence — have broken through the inertia of law enforcement.

“The response is coming from the public to demand this,” Black said. “If we wanted law enforcement to make these changes we would be waiting a long time.”

But changes can be made. Before the rise of ambulance companies, it was police officers who typically took ill people to the hospital.

“You also need places to take people in crisis other than a hospital or jail,” Black added, noting that more low-barrier shelters, sobering centers and stabilization centers where people in crisis can chill out for several hours are useful alternatives.

Making these changes will likely put a strain on resources, according to Lisa Dailey, acting executive director of the Treatment Advocacy Center, who says that police reforms need to go hand in hand with changes to mental health systems.

“The patient is like a hot potato,” Dailey told Capital & Main. “[Law enforcement] doesn’t want this responsibility, but the mental health system doesn’t want it either. The philosophy of state departments of health is no involuntary detainment. That makes it more likely that they will end up in the criminal justice system.”

Several resources and policy changes are needed, said Dailey: more beds at inpatient facilities, more workers at outpatient centers and time enough for patients to stay until they stabilize. Eliminating the loophole allowing Medicaid to reject paying for treatment at mental health and substance abuse treatment facilities with more than 16 beds is another policy change Dailey advocates.

“States have no incentive to fund facilities with state dollars, then ultimately they close facilities. The whole [mental health] system is underfunded and poorly organized,” notes Dailey.

The wide ranging George Floyd Justice in Policing Act currently making its way through Congress focuses on curbing police abuses and the use of chokeholds, but does not reroute mental health crises away from police.

That’s fine, say advocates like Black, who says different communities have distinct needs for mental health and addiction services. “Listen to community stakeholders, because that is where the truth is, people with lived experience.”

A majority of the public is willing to make a financial investment on the federal level. A 2020 survey from the Alliance for Safety and Justice found more than three-quarters of voters support using federal funding to expand mental health crisis responses to divert mental health 911 calls away from police. Mental health and police reform advocates have been calling for these changes for years. Now, with renewed scrutiny on police throughout the nation, they say there’s no need to wait.