Playwright Idris Goodwin delves into the thorny issue of race in America with this incisive three-character play about two longtime friends whose artistic partnership is shattered after they fall out over the police shooting of a black teen. Touching on white privilege and the co-opting of hip-hop by commercial interests, it’s an imperfect but potentially compelling work, sabotaged by directorial missteps that render this production a disappointment.

A West Coast premiere directed by Deena Selenow at the Fountain Theatre, the play revolves around two hip-hop performers, one black and one white, who have been friends since childhood. Verb (Matthew Hancock), who’s African-American, and Pinnacle (Chad Addison) who’s white, are on the verge of making it big, with a gig on the Tonight Show that will boost their careers to the national stage. 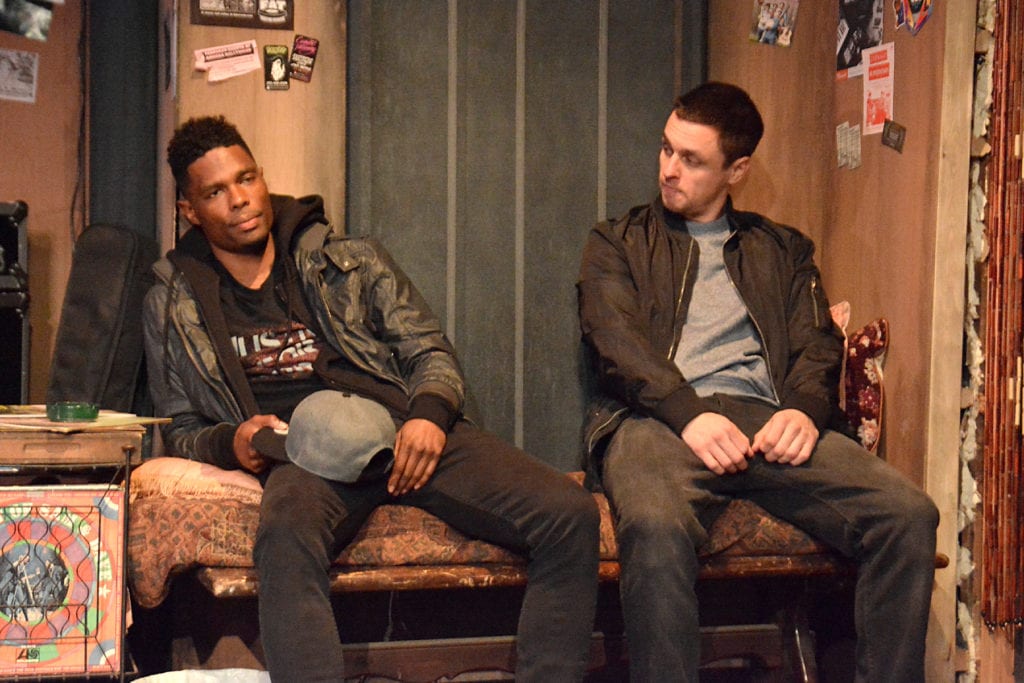 But tensions are simmering. For one thing, the balance of power between these old pals is out of whack; Pinnacle, the headlining word guy, is in charge, while Verb, the hype man, is a subordinate player. And Verb has problems: irrational behavior, imbibing drugs, and creating havoc by inviting numerous friends and family to the studio to watch the group rehearse, some of whom eye the Caucasian Pinnacle with malignant intent. This spooks Pinnacle, and he wants it to stop.

The bright spot in all this is the group’s beat maker, Peep One (Clarissa Thibeaux). She’s a smart, lively person of mixed race who knows her stuff and doesn’t take guff from these men. Peep One is hardworking and ambitious — and the only one among the three who knows how to turn on the drum machine. The opportunity for national exposure is one she prizes as much as her male colleagues do.

So when the shooting of a 17-year-old boy enrages Verb and provokes him to suggest a protest on national TV, she’s as wary as Pinnacle, who firmly believes that musical careers and politics should not be mixed. Sure enough, after Verb goes rogue and flashes a “Justice for Jerrod” T-shirt in the middle of the Tonight Show performance, their manager freaks out and police unions begin protesting their performances.

Unlike Goodwin’s Bars and Measures, an unforgettably heart-stopping drama produced at Boston Court in 2016, Hype Man could use work. While there’s some backstory (especially one very telling anecdote about a time both men went to jail), we need more. And Pinnacle’s hard-ass take on the police shooting is hard to buy, given that he grew up in a racially mixed neighborhood where his best bud was black. It’s possible to have a clash of perspectives between him and Verb without Pinnacle’s view being so callously extreme.

But these issues are easily fixable. The main problems with the production are its staging and, by extension, the lead performances. For inexplicable reasons, Selenow repeatedly positions Hancock and Addison at opposite ends of the stage, where they toss dialogue at each other like so many catch balls. Neither character seems very bright; Addison delivers his lines with an almost deadening lack of affect, while Hancock’s Verb is sullen and defensive. Why couldn’t these characters have been played as dynamic and sharp? Instead the two are depicted with this patina of dumbness that summons stereotypes fostered on working-class people, regardless of race.

In terms of performance, the saving grace is Thibeaux’s smart and sunny beat maker, who lights up each scene she partakes in, and whose manifest joy in the music she helps create is instantly contagious. This actor brings an intelligence and esprit to her work that the production on the whole could use more of.

There Will Be Blood: The Rise and Fall of Theranos’ Elizabeth Holmes