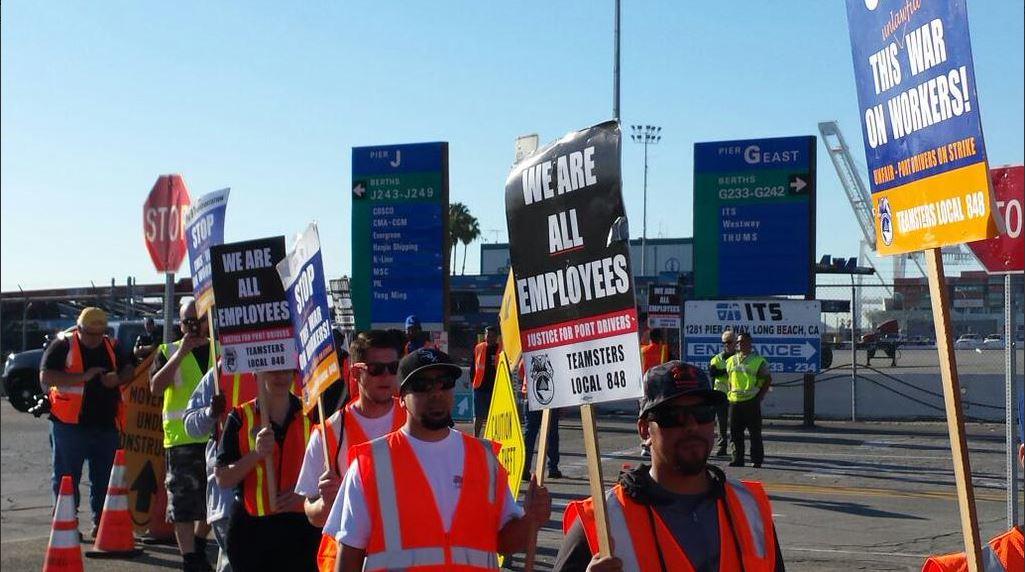 As the strike by a couple hundred harbor truck drivers enters its third day, work stoppages have spread to a Union Pacific rail yard located in Lincoln Heights, just east of downtown Los Angeles. A rally will be held there today, Wednesday, April 29, to protest the theft of the drivers’ wages by port hauling firms. It takes place 2:30-4 p.m. at the Union Pacific Railroad Trailer and Container Intermodal Facility, 1041 Richmond Street.

At the heart of the dispute is the continuing fight of short-haul drivers to be classified as company employees by the trucking firms they work for. Currently, most drivers are considered “independent contractors,” a job category that denies the drivers basic labor benefits and rights, while placing on them the costly burden of paying for the maintenance, fuel and insurance for their vehicles.

On Monday, drivers for Pacific 9 Transportation, Intermodal Bridge Transport, Pacer Cartage and Harbor Rail Transport set up picket lines at maritime cargo terminals located at the Ports of Los Angeles and Long Beach. This is the third work stoppage by port truck drivers over the past year. The current strike is unfolding against a backdrop of legal victories won by drivers against harbor-area trucking companies, and a number of negotiated agreements with firms that have pledged to reclassify their drivers as company employees.

According to a spokeswoman for the strikers, who are supported by the International Brotherhood of Teamsters, “Pacer Cartage is also facing a class action lawsuit due to the company’s alleged willful misclassification of employees.”

In San Diego, picket lines continue to be thrown up outside Toyota’s Otay Mesa complex in an attempt to slow deliveries of the automobile company’s equipment that are bound for Toyota’s assembly plants in Mexico.

In the meantime, a hardship fund has been set up for the strikers by the L.A. County Federation of Labor.