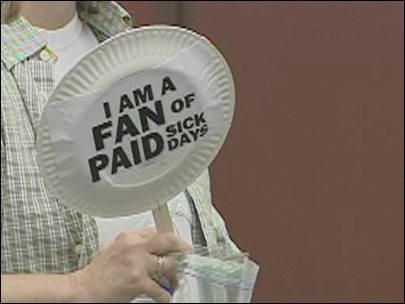 In a growing sign of civic concern about the lack of employer-provided sick leave, Philadelphia’s city council voted Thursday morning to require most businesses to offer some form of the benefit to their workers. On Wednesday, Portland’s city council  also voted to require private businesses to offer sick leave to their workers. The Portland council vote was unanimous; the Philadelphia vote was a veto-proof 11 to six.

A Los Angeles Times business-section story reported that, prior to the Portland passage, only three other U.S. cities have mandated that employers provide workers with sick leave. (The state of Connecticut also requires it.) However, all employers affected by living wage laws in Los Angeles and Long Beach are also obligated to offer sick leave benefits.

An awareness of links between the spread of workplace illnesses and the lack of paid sick time – which discourages ill workers from staying home — has increased public and political pressure on businesses to create healthier working environments by offering sick leave.

Minimum Wage Foes: Crying Wolf All the Way to the Bank