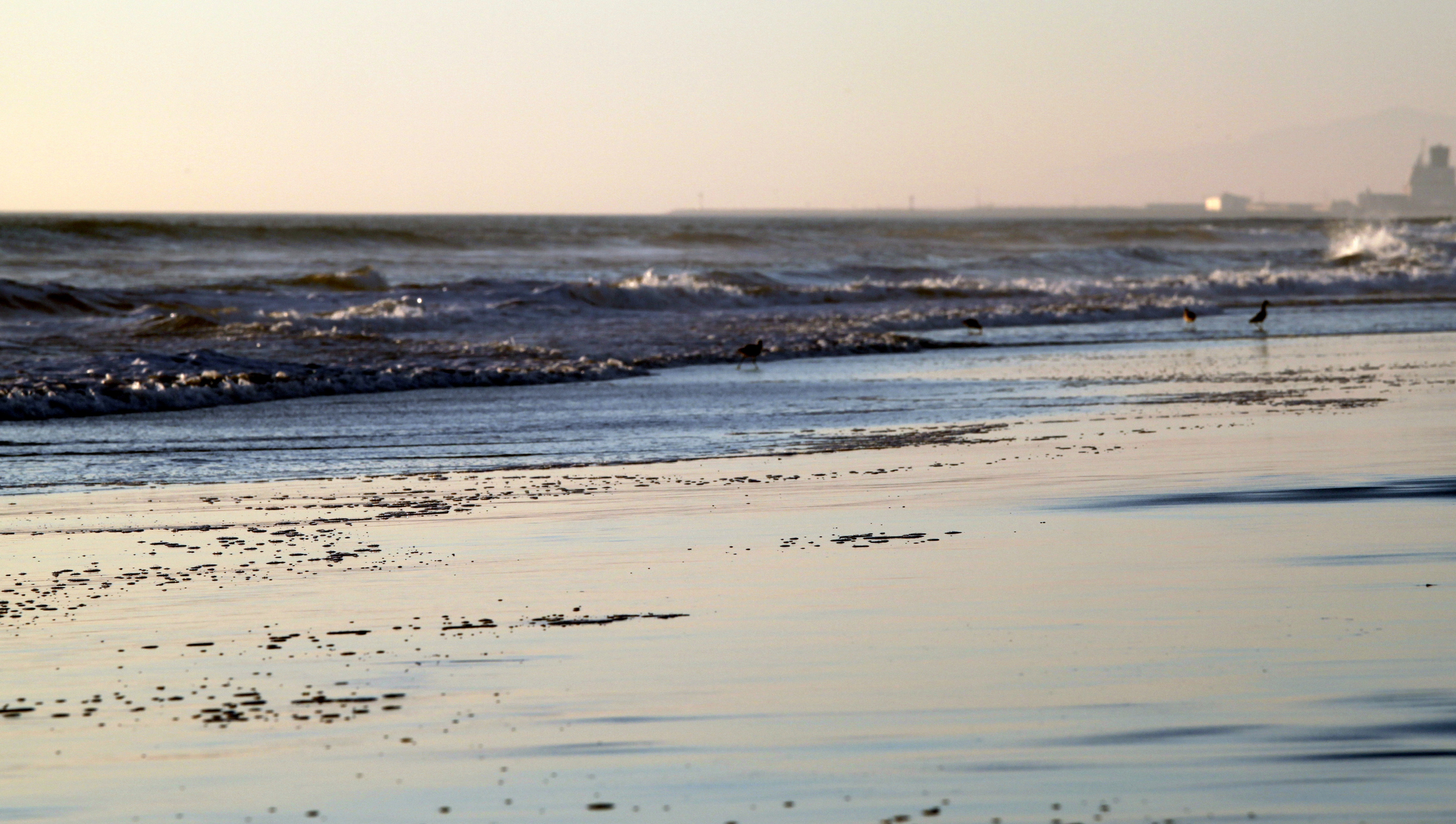 Ormond Beach in the Ventura County city of Oxnard, is quite beautiful, visitors say, once you make a less-than-scenic trek to get there. To reach it, you park on the street, cross a busy intersection and walk past a power generating plant, a paper mill, a wastewater treatment plant and a Superfund site that was a dumping pond for aluminum recycling waste. You also pass a 34-acre vacant lot, a desolate space that has become the newest battleground between industry and environment.

The Port of Hueneme (why-NEE-me), which is sandwiched between the city of Oxnard and the ocean, wants to store thousands of cars coming off ships on that land. Oxnard residents say this proposal would entrench more industrial activity in an already environmentally besieged region. For those who oppose the proposal to store cars, it is a fight between different visions of the future of the community.

“Twelve years after moving [to Oxnard] I found out about Ormond Beach, which is amazing because I live so close,” said Yuritza Ventura, a high school junior. Ventura learned about the beach only after volunteering for the Central Coast Alliance United for a Sustainable Economy (CAUSE), doing air quality monitoring in the area.

In the latest development in an ongoing tug of war between industrial growth proponents and advocates of wildlife restoration, Ventura and other residents of this largely lower income Latino community want to stop Port Hueneme’s proposed vehicle storage plan, which they believe will increase pollution.

Critics of the project say it endangers the city’s long-term plans for this land as a gateway to the Ormond Beach Wetlands.

If plans are approved by Oxnard’s planning commission as authorities at the Port of Hueneme want, up to 4,944 new cars will be parked on that 34-acre lot at any given time for three years, with a possible two-year extension. The port would rent the parcels from a private owner for an undisclosed sum. The cars would sit on gravel, contained by a 6-foot-high security fence. Logistics company Glovis would manage the movement and storage of the cars from ship to storage to dealer lots.

Jay Dobrowalski, a senior planner with the city of Oxnard, said that the planning commission has no recommendation regarding the project, and that the city is preparing written responses to public comments regarding the environmental impact report (EIR). In an email, he wrote, “An exact timeline with a Planning Commission hearing date is not yet identified.”

Much of the area is zoned for light industrial use, but opponents of the plan to store thousands of cars on the 34-acre lot say it endangers the city’s long-term plans for this land as a gateway to the Ormond Beach Wetlands. It also would heighten their already high environmental burden, Oxnard residents say, by adding more port traffic and worsening pollution from particulates.

Opponents also fear that the temporary storage of new cars on their journey from ship to dealership won’t be temporary at all and would build momentum for more industrial projects in south Oxnard at a time when residents want more green space. Oxnard has a long-term plan to use the lot, the only large piece of open land in the city, as an educational nature center and gateway park for accessing the beach. A more immediate project, a preliminary restoration plan for the Ormond Beach Restoration and Public Access Project, which would encompass 630 acres between the Port and Point Mugu, was issued in 2019.

Supporters of the Glovis project include business groups such as the West Ventura County Business Alliance, saying it will help the port retain its competitive edge in the import and export of vehicles. They and Port of Hueneme authorities contend that the city doesn’t have any immediate plans for the land, and insist that using it to store cars would be temporary. The port leadership also say that the project will increase daily car trips by only a small percentage and that on most days there would be no loading and unloading of vehicles.

“This 34 acre project is being described as temporary, and that it’s just a parking lot, when really it’s so much bigger than that.”

An environmental impact report issued by the city of Oxnard concluded that the Glovis project would not pose significant environmental hazards. But opponents say the EIR was inadequate, doesn’t meet California Environmental Quality Act requirements, and downplays traffic and air quality concerns.

At an online community meeting to discuss the port’s proposal in March, one project opponent said, “That 34 acres looks to many like a trash dump, but it is not. It is a very small buffer to the Southwinds neighborhood and could be an access point to the Ormond Beach and wetlands area.” Others noted that the lot is a native habitat to several species, including the snowy plover.

Giles Pettifor, an environmental manager with the Port of Hueneme, told Capital & Main that the Glovis plan would actually reduce some emissions from port activity. Currently, “Cars get driven off of the ship, they get put on a diesel car carrier, and they frequently go out to storage locations that are far enough away from the port that they require a diesel truck carrier to move them to those locations. So by using this location, you basically eliminate the diesel truck car carrier from the equation, and you consolidate that storage allocation that is close enough to where they can drive under their own power.”

Port officials also point out that the land has been vacant for many years and isn’t being used, and that at the moment there are no plans to build the gateway park on that land. In an email, Dobrowalski said the city development staff was not aware of any plans for such a park, and reiterated that Oxnard does not own the parcels.

Critics who worry about the environmental impact of storing almost 5,000 vehicles on the land contend that the Glovis plan is merely a stepping stone to move into a much larger permanent storage site a few blocks away.

Documents shared with Capital & Main by CAUSE and obtained by FOIA request show detailed plans for a 250 acre Multimodal Logistics Park less than a mile from the Glovis project, and to use this MMLP as part of its long-term plan to expand the port capacity.

“Realistically speaking, the project here helps preserve that land from sale to say, like a Home Depot.”

“This 34 acre project is being described as temporary, and that it’s just a parking lot, when really it’s so much bigger than that,” said Lucia Marquez, an organizer with CAUSE. “There’s just such a lack of transparency and information that is either being withheld or avoided.” It’s this lack of transparency, critics of the proposal say, that lead them to suspect the car storage may last much longer than five years.

Twenty years ago the city was considering a similar proposal, using the same parcels of land as a distribution center for Volkswagen and Audi cars. When city staff recommended the proposal without an EIR, opponents threatened a lawsuit. The Oxnard City Council voted for an EIR but one was never conducted because the logistics company that would manage the cars walked away from the project.

Miguel Rodriguez, community outreach manager for the Port of Hueneme, said that the only permanent ways for the city to prevent expansion from the port, or development from any private company, on that 34 acres, is to buy the land outright or use eminent domain.

“If the city really wants it, based on the political will, right, they might be able to [use eminent domain]. You might need to have some type of transfer of development rights strategy behind you where you’re able to land swap maybe with the owner, [but] I don’t think that the city of Oxnard has surplus land in its stock. Realistically speaking, [the Glovis] project here helps preserve that land from sale to say like a Home Depot or some other type of light industrial use.”

Critics say building a big box store on the 34 acres would be worse than car storage. In recent years, environmentally concerned residents have been flexing their muscles, and in 2017 they scored a victory by scuttling a proposed 262-megawatt power plant. Now many of these same residents are rejecting the Glovis car storage project not only for what they say would be the immediate environmental effects, but because it doesn’t fit their vision for a greener Oxnard.

“Our hope and vision is, you know, aligned with this much larger restoration of the coastline,” Marquez said, “and anything that doesn’t include open space and public access is not something that we want.”

Related Topics:FeaturedPollutionVentura County
Up Next