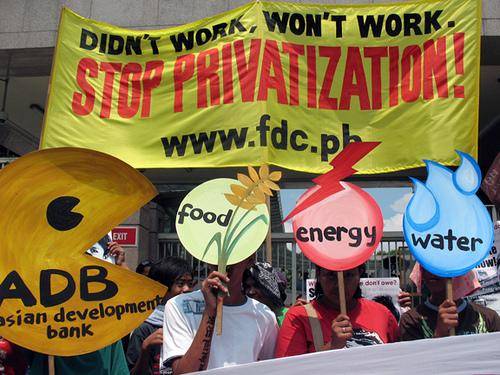 When future taxpayers look back to the moment they started taking back control of their schools, roads and services, they will look to 2013. From coast to coast, taxpayers rejected reckless outsourcing schemes.  They held for-profit corporations accountable.  And they said “no deal!” to CEOs who would put profits ahead of public health and safety.

These victories don’t always appear in the national media.  But taken together they represent a real shift.  Working together, I’m sure we will have many more in 2014. 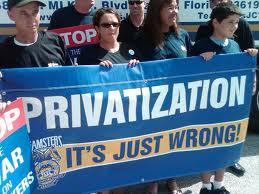 Idaho: Corrections Corporation of America left the state “after more than a decade marked by scandal and lawsuits surrounding its operation of the state’s largest prison.”  Upon hearing the news, Spokesman Review columnist Shawn Vestal wrote, “this moment provides Idaho’s political leaders an excellent opportunity to examine the assumptions that first brought Corrections Corporation of America to the state more than 10 years ago: the unshakeable faith in the privatization of public services. Might it have been a mistake, this presumption of excellence and efficiency? Should we expect, from the Idaho politicians who have collected such generous donations from CCA over the years, some soul-searching and rethinking?”

Indiana: After more than a year of careful analysis that included input from a broad range of stakeholders on the Bloomington and Indianapolis campuses, Indiana University chose not to outsource parking operations on its two largest campuses but instead to pursue an internal plan to strengthen its parking system.

Iowa: Governor Terry Branstad rejected bids the state received from a private vendor seeking to purchase Iowa’s statewide fiber-optics network. Branstad said “[t]hough I appreciate the time and effort it took for Iowa Network Services to develop their bids, I believe the ICN is worth more to the state of Iowa than what the bidder was willing to pay.”

Michigan: The State of Michigan chose not to transfer prisoners to a privately run prison because two firms that bid on the work submitted prices higher than what the Department of Corrections spends now. Kurt Weiss, spokesman for the Michigan Department of Technology, Management and Budget, said “both bids cost substantially more than the current direct costs for MDOC to provide the services.”

Missouri: Veolia Water North America pulled out of a controversial consulting contract to study the revamping of the St. Louis Water system after protests over the company’s “environmental and business practices, with some residents worried the company would try to seize the city’s water and reduce its quality.” According to polling, nearly 70 percent of respondents said the city shouldn’t sign the contract. 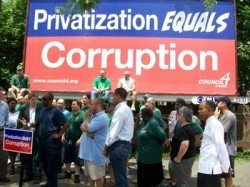 North Carolina: The High Point City Council voted against outsourcing the city’s recycling system, citing higher costs of privatized systems in neighboring cities. “Council members decided that the risks of privatization were too great for several reasons—the length of time it would take to transition to the new service, uncertainty over what would happen to the city’s existing solid waste facilities, concern that a private hauler might decide to terminate its contract if the program was deemed unprofitable and being subjected to the whims of the private marketplace.”

Oklahoma: Governor Mary Fallin announced plans to suspend a task force set to privatize the Grand River Dam Authority. In a statement to the media, Fallin said while she still supports the mission of the task force, its work might unintentionally and negatively affect the GRDA’s future bond ratings—especially as the non-apportioned state agency moves forward with expansion plans.

Ohio: Cincinnati’s new mayor canceled efforts to outsource city parking meters. Mayor Cranley campaigned against the lease during the past year, and a majority of the new city council opposed the deal as well.

Pennsylvania: A plan to outsource liquor stores backed by Gov. Tom Corbett failed to get out of the state senate after passing the house.

Tennessee: Upon release of ITPI’s report on prison quotas The Tennessean launched a scathing editorial against a contract between a Nashville facility and Corrections Corporation of America: “Regardless of whether you agree with the notion of privately run prisons, it’s hard not to be exasperated at the disclosure that taxpayers have had to pay nearly a half million dollars over the past two years to Corrections Corporation of America, not for housing prisoners, but for a lot of empty beds.”

Texas: A task force studying privatizing the Fort Worth water department opposed a plan to outsouce city water facilities, arguing that “[p]rivatization would likely force water rates up, increase costs for the city and the Tarrant Regional Water District and would limit Council’s flexibility in directing economic development.”

Eddie Reed: The Passing of a Labor Hero