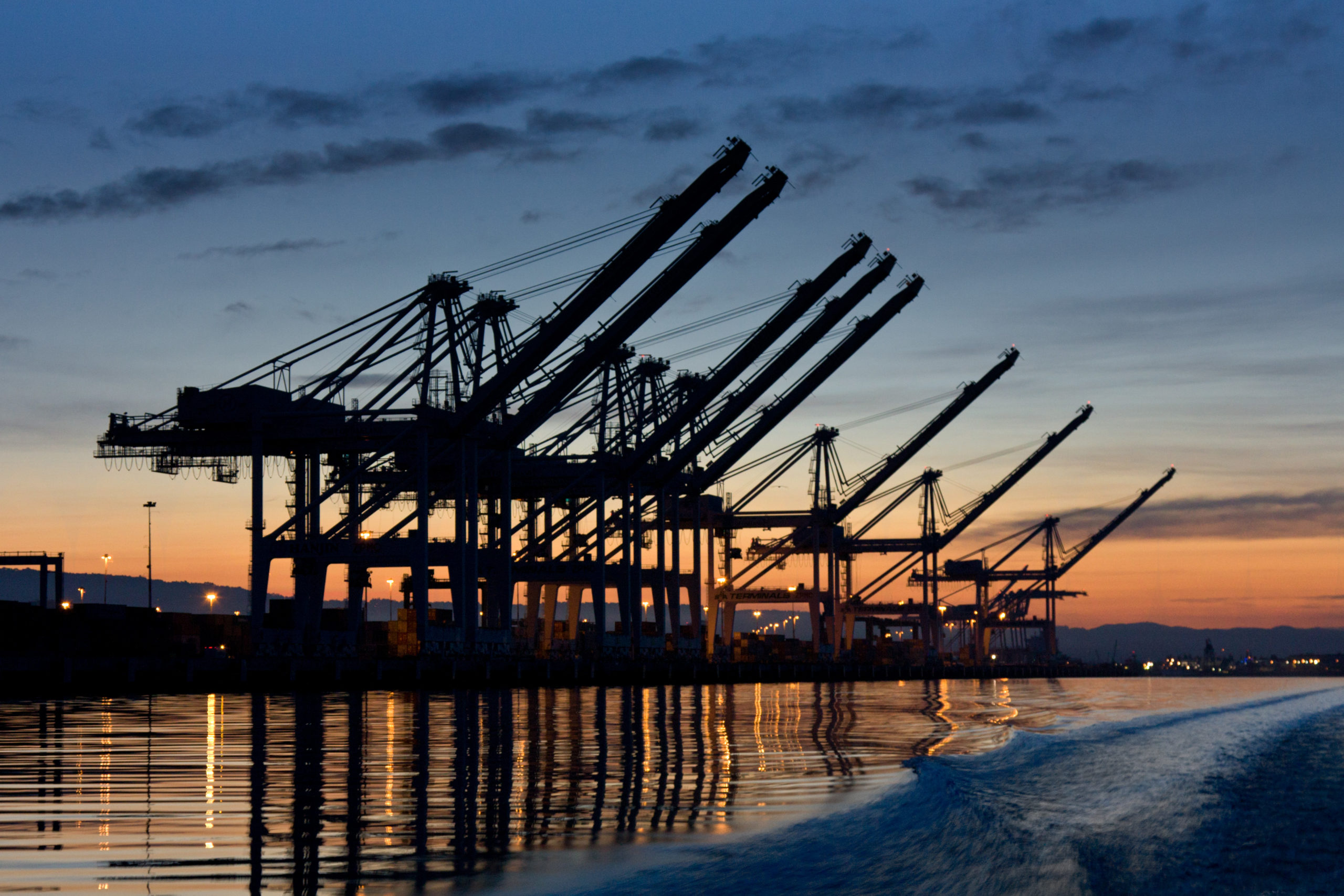 A real estate development plan that includes a new park for the Oakland Athletics has set up a battle with the team and its supporters – including Mayor Libby Schaaf — against a coalition of labor unions, trucking companies, heavy industry and environmental groups who say it would eliminate jobs at the port, increase car and truck traffic in the neighborhood and create environmental hazards.

The baseball franchise’s plan would move the A’s from the crumbling Oakland-Alameda County Coliseum into a new 35,000-seat park at the Howard Terminal in Oakland’s waterfront Jack London Square. The proposed mixed-use development would include up to up to 3,000 housing units; nearly 2 million square feet of retail, office and entertainment space; and a hotel with up to 400 rooms – all in time for the 2023 baseball season, the team hopes.

A coalition of unions, maritime businesses and environmentalists questions the port site of the Oakland A’s proposed new stadium and mixed-use development.

The A’s, owned by billionaire John Fisher, have pledged to privately finance at least the ballpark, but not the infrastructure needed for it. But the team has not disclosed details , nor how much the city of Oakland might have to kick in. A business plan was provided to the city in January, but A’s president Dave Kaval told Capital & Main he couldn’t disclose even the broad strokes.

The coalition opposing the Howard Terminal project, the East Oakland Stadium Alliance, includes organizations that don’t usually work together, including the International Longshore and Warehouse Union, the Pacific Merchant Shipping Association, the Harbor Trucking Association and Sailors’ Union of the Pacific. Environmental groups have expressed concerns with the proposal, including Sierra Club California and Sierra Club San Francisco Bay, as well as the Golden Gate Audubon Society. The coalition questions the site of the proposed development, not the ballpark itself, and says that if it’s just a new ballpark that’s needed, the current Coliseum property would be a better spot.

But the development is not just about a ballpark: With some of the highest real estate prices in the nation, a waterfront location boasting views of the San Francisco skyline may be a bigger attraction than any baseball team.

Nearly all containerized goods that come to and from Northern California pass through the Port of Oakland, the eighth largest container port in the U.S. It also supports 84,000 jobs. Currently, the industrial area identified for the Howard Terminal project is primarily used for truck staging, a method of keeping cargo moving and minimizing congestion. Trucks park there, sometimes idling for hours, to take cargo to destinations at off-peak hours.

Kaval says that there are other areas in the port property that can absorb the displaced truck staging, pointing to sites identified in the project’s economic impact report.

Not every labor union is opposed to the new stadium, including the Alameda Labor Council, which supports the development project.

Mike Jacob, vice president and general counsel of the opposing Pacific Merchants Shipping Association, said the  report only touches on the potential for parking at another area of the property and did not adequately analyze the impact of truck displacement and additional truck traffic.

“[The A’s say]) this staging area [is] just a vacant lot,” Jacob said. “But it isn’t just parking. It keeps cargo moving. There is no other designated staging area. They assume it will be moved somewhere, and assume trucking companies will find one.”

The Pacific Merchants Shipping Association was one of several groups that sued, unsuccessfully, to stop legislation that fast tracks environmental review of the project.

Clarence Thomas, a retired longshoreman and member of the East Oakland Stadium Alliance, said the development would change Oakland in a major way, and risks Oakland’s position as third major West Coast port.

“This is an attempt to build a baseball park on an assembly line,” Thomas said. “There will be a disruption of [truck and ship] traffic, competing against construction supplies when the project is built and shippers may say, ‘Let’s avoid this port and go to SoCal instead.’ When completed you [will] have baseball games going on, people watching games from their sailboats in the shipping lanes. But Fisher thinks he knows more about shipping than the port.”

“There has been no serious discussion about this construction with the maritime industry or unions,” Thomas added. “The baseball stadium is not what this is about. It is a real estate deal, and it’s a boondoggle.”

Not every regional labor union is opposed to the project. Liz Ortega-Toro, executive secretary and treasurer of the Alameda Labor Council, said in an email that her organization supports the Howard Terminal development because it would provide construction jobs at fair wages with good benefits and that “there’s no evidence that there will be any loss of Port jobs.”

According to an economic report commissioned by the team, the project would bring in an estimated $7.3 billion to the city over 10 years.

Roger Noll, a professor emeritus in economics at Stanford University, has said that subsidized stadiums, despite backers’ claims, provide, at best, a very limited economic boost to their surrounding communities. That’s because fans are drawn from the local area and stadiums don’t deliver enough tax revenue to offset the public investment. In an email to Capital & Main, Noll suggested that, because the A’s park would include infrastructure (even if it’s not yet clear who would pay for the infrastructure), it might provide some economic benefits, at least to the surrounding area.

Critics of the Howard Terminal project say the current Coliseum site is a better fit for a new stadium because it has all infrastructure in place, including freeway access
and a rapid transit (BART) station.

“The best way to build a stadium, from the standpoint of assisting the local community, is to integrate the facility into its surrounding neighborhood,” Noll writes, citing examples of the new Los Angeles facility for the Rams and Chargers. “The new A’s park is expected to follow this pattern. But while that will benefit the immediate neighborhood, the main effect will be to reallocate businesses from elsewhere in Oakland.”

Kaval said the development would indeed be integrated into the community, making Howard Terminal an extension of Jack London Square, with 18 acres of new open space. “People in the area can congregate by the water, and this will enhance public access to the waterfront.”

Kaval also claimed that pollution would be reduced from current levels, due to the elimination of idling trucks near residential areas. Jacob refutes that claim, pointing to the recent West Oakland Community Action Plan, endorsed by the Bay Area Air Quality Management District and California Air Resources Board, which identified the need to buffer sensitive receptors (human lungs) from industrial activities and emissions in West Oakland and to further separate noncompatible uses.

“[The] A’s plan is to do the exact opposite of moving pollution sources away from residents; instead it proposes to move residents into areas with existing pollution sources,” Jacob said in an email. While the community action plan does not mention Howard Terminal or the A’s project, the location is included in the plan’s overview of the area and shows the highest concentration of pollution occurring downwind of industrial activities, near Howard Terminal, Jacob said.

In a letter to Oakland Mayor Libby Schaaf last year, the Sierra Club expressed concern that pollution from increased auto traffic, soil contamination from decades of heavy industry, in addition to flooding dangers from climate change, makes the Howard Terminal project a bad fit for the area.

Mayor Schaaf’s office declined a request to comment for this story, as did the Port of Oakland. Schaaf, a strong supporter of the project, has said that she would “listen to all stakeholders’ concerns.”

Kaval said that none of the 25,000 people living within a mile of Howard Terminal would be displaced by the project, and that the still-undisclosed business plan would provide money for residents displaced by any other development projects in the city, as well as money set aside for low income housing units in the project, though he wouldn’t say how much.

The team also bought half of the Coliseum site and is attempting to buy the other half from the county, in order to redevelop it, Kaval said. But the effort of the team to redevelop the current ballpark site underscores the main question of the Howard Terminal plan’s critics: Why not rebuild a stadium where the Coliseum is now?

Jacob and other critics of the Howard Terminal project say the current Coliseum site is a better fit for a new stadium because it has all infrastructure in place, including freeway access and a rapid transit (BART) station. The A’s have proposed a gondola to move fans from the nearest BART station to the new ballpark.

The public comment period on the draft environment impact report ends April 27. The city council will then review comments and vote on the proposed business plan, taking EIR comments into consideration, sometime this summer, Jacob said.

“[City council members] want to see the final package, what is really going to be proposed in terms of how much city money is on the table for infrastructure, what the Community Benefits Agreement looks like, and the details of a development agreement,” Jacob said.

In an Alliance-sponsored poll of 500 people, those questioned early last year said they preferred a new ballpark on the present Coliseum property (62%) over the Howard Terminal site (29%). An earlier poll commissioned by the Oakland Chamber of Commerce showed a majority of residents supporting a privately financed ballpark at Howard Terminal, although the poll didn’t compare public reaction to that site versus the Coliseum site.

Related Topics:California Air Resources Board (CARB)FeaturedgentrificationInternational Longshore and Warehouse UnionOakland
Up Next