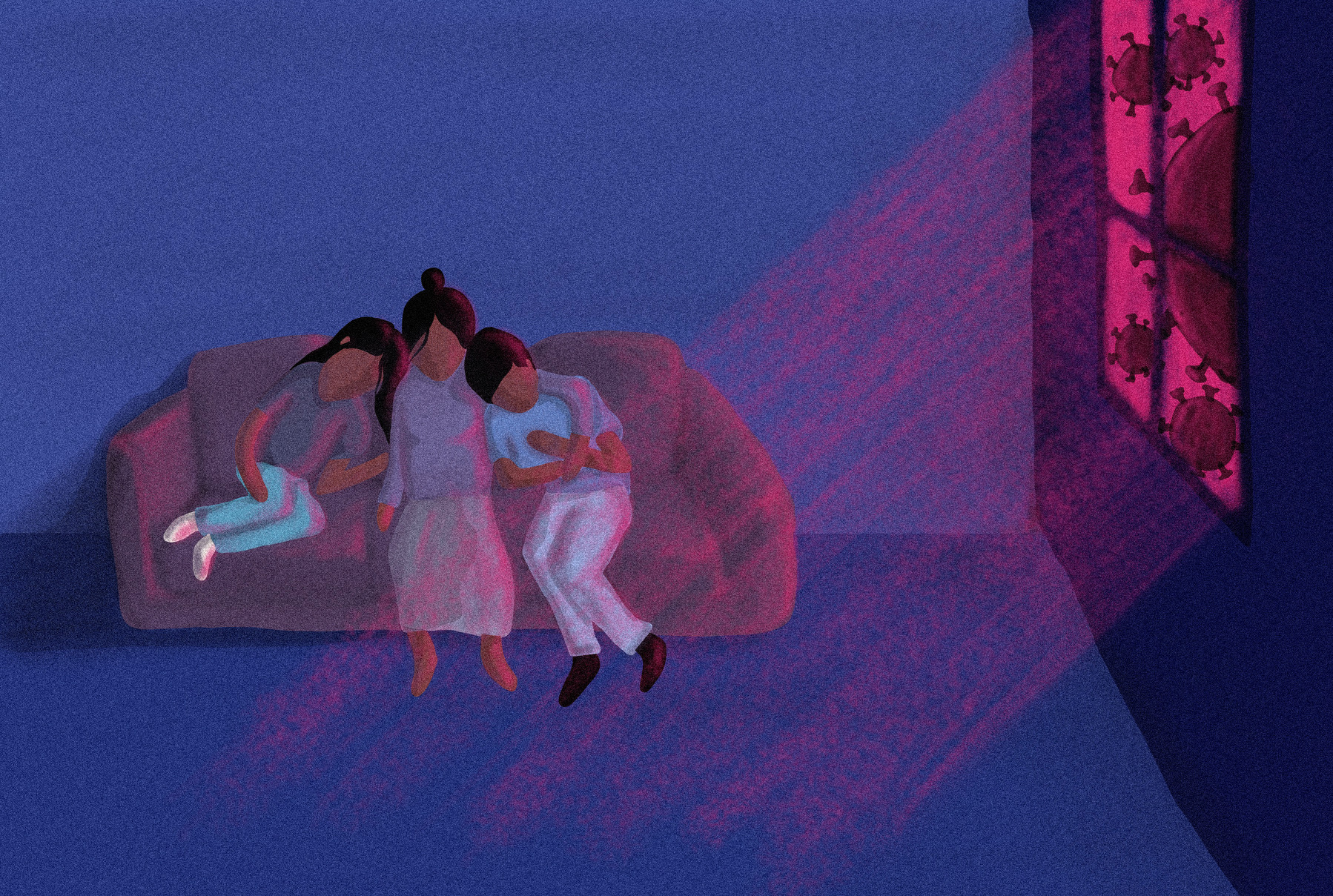 Jenny’s family lives paycheck-to-paycheck on Los Angeles’ Eastside. Usually, they can piece together enough income from her mom’s taco cart and her brother’s rideshare driving to cover rent and food. But the coronavirus pandemic is disrupting their daily grind.

“Sometimes I get discouraged,” says Jenny, 19, a first-generation college student who asked not to be identified by her full name to protect the privacy and safety of her family, which has mixed immigration status.

With bills piling up, a family seeks help from government agencies. But their members’ immigration statuses mean they don’t all qualify for federal, state or local aid.

While families like Jenny’s have long experienced hardships due to the United States’ rising inequality and systemic racial disparities, the pandemic, and the economic downturn it has spurred, are deepening these fissures. If left unaddressed, these inequities are likely to prolong the oncoming recession and worsen health outcomes.

Jenny’s whole family has been out of work since the start of California’s stay-at-home order in March. Each member has a pre-existing health condition that makes them more vulnerable to the virus’s effects, and their precarious service jobs, which expose them to many people, would put them at higher risk of contracting it.

With bills piling up, they’ve sought help from government agencies. But their immigration statuses mean they don’t all qualify for federal, state or local aid. Instead, Jenny says, her family is mostly leaning on local nonprofit groups and school institutions to keep food on the table and a roof over their heads.

As the crisis wears on, Jenny says her family isn’t sure how to plan for the future. But it’s clear that short-term aid won’t sustain families like hers for long, especially as the pandemic and ensuing economic recession amplify longstanding inequities in low-income communities.

“There’s not much help to speak of”

When Jenny helps her 47-year-old mom drag the heavy, rickety taco cart down the block in Boyle Heights, it means one thing: Their family has run out of food. During the pandemic, they’ve tried to limit their street vending business due to fears of catching the virus from customers. But when their stomachs are empty, Jenny says they have few other options. (The city of L.A. has effectively banned street vending since March, and the county says it is enforcing fines against those without licenses. Only a few hundred of L.A.’s estimated 50,000 street vendors are permitted despite hard-fought legalization efforts.)

Jenny’s undocumented mom doesn’t qualify for most forms of government aid. She applied for cash assistance through Los Angeles’ Angeleno Card but has yet to hear back.

Jenny’s brother, 35, is a Deferred Action for Childhood Arrivals (DACA) recipient with an 11-year-old U.S. citizen son. The two of them qualified for the federal government’s stimulus aid. (Jenny, who is considered an adult dependent of her brother, did not.) Jenny’s brother is also getting unemployment insurance, although he says it isn’t enough to sustain the whole family.

“All of the bills keep coming. You can postpone them, but in the end I’ll have to pay. There’s not much help to speak of,” he told Capital & Main in Spanish during a recent video call. His biggest frustration is that he and his family members all pay taxes but are nonetheless shut out of most assistance.

Since government programs have been of little help, the family is counting on the meager funds brought in from selling tacos, and on school meal programs, to keep themselves fed.

Every morning, the family picks up bagged lunches from the Los Angeles Unified School District. They also go to food banks to collect boxes of basic goods. They’re down to eating one meal a day, supplemented with processed snacks when possible. Jenny says the limited access to healthy food is wearing her down: “I feel tired when I want to have the energy to do more things.”

Jenny’s brother’s biggest frustration is that he and his family members all pay taxes, but are
nonetheless shut out of most assistance.

Jenny has also received financial support from California State University, Los Angeles, where she’s a freshman. She put the grant toward rent, food and looming bills. “But that money is long gone now,” she says.

The pressure to succeed that Jenny feels as a first-generation college student  is mounting. Although she started her freshman year strong, she says it’s getting harder to focus on her studies or plan for the future: “To take an extra step to get a better job, to reach your goals, it’s a lot more difficult.”

The financial aid that makes it possible for her to attend classes is tied to her keeping her grades up. But the pandemic-triggered transition to digital learning has been rough, and she worries her grades may be slipping.

The El Camino Real Library, where she usually goes for tutoring and a quiet space to focus, has been closed for months. At home, it’s nearly impossible to concentrate with little kids running around. And her attention has been split between her own studies and those of her young nephew, who is also navigating a confusing new online curriculum. Jenny’s brother says he tries to help his son too, but he doesn’t understand the English-language instructions or computer programs.

“I feel like the schools should have been more lenient, given everything that’s going on right now,” Jenny says. Instead, her homework load has felt heavier, and her assignments have become more reading-intensive. She struggles to focus with noise and interruptions at home.

Despite the challenges brought on by the crisis, community groups are doubling down to help needy families in the absence of government programs.

When classes moved from in-person to online, Jenny didn’t have a computer with a working keyboard or camera to connect to the video conferencing platforms used by her professors. Cal State L.A. offered laptop loans on a limited basis, and pointed students toward Internet resources, but Jenny did not benefit. She’s since had a laptop donated to her by a trio of grassroots groups — InnerCity Struggle, Community Coalition and the Brotherhood Crusade.

Maria Brenes, who directs InnerCity Struggle, told Capital & Main that the Digital Justice Campaign is aimed at denting the “digital divide” experienced by students in the underserved communities of East and South Los Angeles. The organizations are raising more than $400,000 to provide young people with laptops, tablets, headphones, Internet hotspots and other technological tools. Their goal is to ensure the students can participate in online classes, engage in social justice organizing and help their families apply for public assistance opportunities. They are also encouraging students to use the devices to fill out the U.S. census, which will determine how trillions of federal dollars will be distributed to local communities.

While Brenes is proud of the Digital Justice initiative, she says that “long term, there is going to have to be a structural, systemic solution to this as well.”

Jenny says that beyond helping her access technology, InnerCity Struggle gave her a prepaid debit card, which she used to buy groceries. According to Brenes, the group has distributed a little over $80,000 in rapid response aid so far. A survey of families that received the cash assistance found that the majority spent it on basic necessities like groceries, diapers, cleaning supplies and personal protective equipment.

Despite the challenges brought on by the crisis, community groups are doubling down to fill the needs of families like Jenny’s in the absence of government programs. “We are serving as trusted messengers and delivering important, critical resources, while keeping our eyes on the larger systemic needs that this moment calls for in order to address the years of structural disinvestment and racial injustice that has made our community, our children, our elders so vulnerable to COVID-19,” Brenes says.

Jenny regularly scrolls through the social media accounts and websites of local community organizations looking for updates on available resources. She recently found an aid fund for street vendors created by another community group and helped her mom apply. She’s also working part time creating posts like these for Building Healthy Communities, a community initiative focused on tackling health inequities in underserved communities. She gets a $150 stipend and the group covers her phone bill.

“There’s a little bit of help everywhere — you just have to look for it,” Jenny says. The applications are tedious and the wait times are long, but every little bit helps in her family’s current circumstances.

“We cannot go back to the status quo”

Before the pandemic, Jenny juggled her schoolwork with two part-time jobs — night shifts on a food truck and day shifts at a CVS Pharmacy. The stress and exhaustion caught up with her, and she decided to focus on college in her second semester. But, when her diabetic brother stopped working to avoid falling ill, she applied for a retail job at Target. She wasn’t hired. A few weeks later, employees at that particular store tested positive for COVID-19. “It’s not like I didn’t need the job,” she says. “But everything happens for a reason.”

The extra time at home has given Jenny space to think more deeply about the toils she previously took for granted. She says the pandemic is helping her see how people struggle differently in American society. While people born with silver spoons in their mouths had money saved up for a crisis like this, Jenny’s family didn’t. While most of her classmates had resources ready to learn online, she didn’t. While others have access to mental health care during these trying times, she doesn’t. And the list goes on.

“The impact of the pandemic is not the same,” says Brenes. Communities of color are less likely to have the financial security needed to weather a crisis due to decades of discriminatory housing, banking and economic policies. They are also more likely to live in overcrowded households or be incarcerated in jails and prisons where there’s a higher risk of spreading the virus, or to be among the county’s unhoused population, which has grown by double digits over the last two years.

Higher poverty areas of Los Angeles are seeing 2.8 times more COVID-19 cases than affluent areas, according to an analysis of county data by the research and advocacy organization Advancement Project.

Blacks, Latinxs and Pacific Islanders living in L.A. County are twice as likely to have died from COVID-19 than white residents, according to data recently released by the county’s public health agency. Public Health Director Barbara Ferrer said the numbers “starkly show how inequities have a life-and-death consequence.”

“We cannot go back to the status quo, especially after all the suffering that our communities have faced and are facing,” Brenes says. “We’re going to need more investment because the needs are only increasing.”

Related Topics:coronavirusFeaturedimmigrationInnerCity Struggle
Up Next