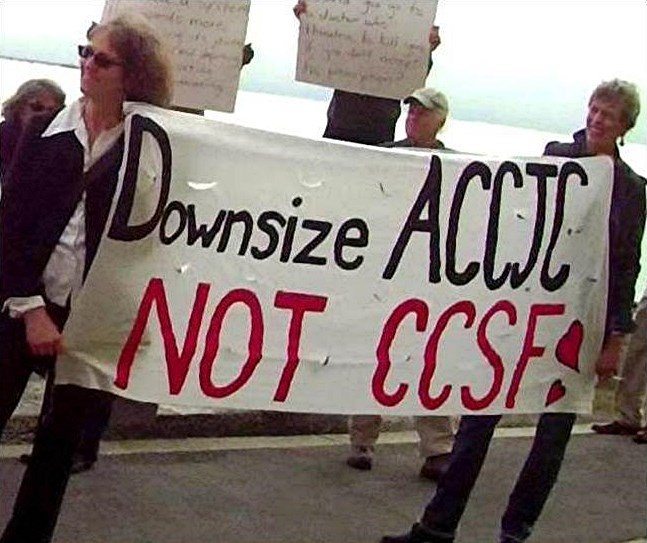 “Truthfully, I’m burned out,” Wendy Kaufmyn sighs over the phone. “And frankly we’re all just really tired. We’re having a meeting next week to try and revitalize ourselves.”

Kaufmyn, a tenured engineering instructor at the embattled City College of San Francisco (CCSF) and a cofounder of the Save CCSF Coalition, is speaking about the 21-month fight for survival of California’s largest community college. The strain and weariness are evident in her quivering voice.

Kaufmyn is not alone. Since January, when San Francisco Superior Court Judge Curtis Karnow issued a preliminary injunction that temporarily barred the Accrediting Commission for Community and Junior Colleges (ACCJC) from pulling CCSF’s academic accreditation, a cloud of uncertainty has hung over the 79-year-old institution and the future of its 80,000 students.

Without accreditation, students would be ineligible for student loans or other types of government financial aid, and would be unable to transfer earned credits to a four-year university. CCSF would quickly be forced to close its doors. (The ACCJC declined to respond to questions for this article.)

The college’s fate has been postponed at least until the end of October when a lawsuit, brought against ACCJC by San Francisco City Attorney Dennis Herrera, goes to trial.

ACCJC, the secretive arm of the Western Association of Schools and Colleges responsible for evaluating California’s 112 community colleges, had set July 31 of this year as the termination date for CCSF’s accreditation. The commission claimed the school had failed to comply with recommendations ACCJC made in a controversial “show cause” evaluation report the previous year — “show cause” being a sanction just shy, in its severity, of a disaccreditation death sentence.

“Since the sanctions, we’ve lost more than a quarter of our student population,” estimates English teacher Alisa Messer. “The damage is being done now.” Messer, who is also president of American Federation of Teachers Local 2121, likens the ACCJC sanctions to a war of attrition.

“All the statistics and all the numbers say that we do an excellent job of educating the students,” she says. “Even so, with the uncertainty and clouds of ambiguity, students are going elsewhere or in many, many more cases are simply dropping out. So we’re losing generations of students right now.”

Herrera’s suit alleges that ACCJC sanctioned CCSF as part of a political agenda “shared by conservative advocacy organizations, for-profit colleges and corporate student lenders” that seeks to coerce California’s community colleges away from an “open access” educational mission that embraces both degree-bound students as well as the underserved and disadvantaged. These last two include under- and unemployed adults, seniors and disabled students, new parents, immigrants learning English as a second language, and other non-traditional learners.

The suit has already been successful on one count — the resulting injunction bought precious time needed for a handful of Sacramento bills to wend their way towards the governor’s desk and bring the college relief.

The most promising are:

In the wake of a legal and political backlash that also has included an audit by the legislature’s Joint Legislative Audit Committee and an official censure last year from the U.S. Department of Education, the ACCJC’s head has remained remarkably unbowed.

In April, ACCJC commission chairwoman Sherrill Amador and vice chairman Steven Kinsella coauthored an op-ed piece in the San Francisco Chronicle that blithely ignored both the court injunction and the turn of the political tide in CCSF’s favor. Their opinion piece suggested that the college voluntarily withdraw its accreditation and reapply, a process they claimed would buy the college more time to fix itself before the commission’s original July 31 termination deadline.

Messer was flabbergasted. “There have been so many points in the last couple of years,” she says, “where people have looked around and said, ‘How could this even be happening? This is so nuts what they’re doing.’ [ACCJC] have been proven wrong so many times. And it doesn’t seem to have phased them.”

However, the bizarre nature of the op-ed, which was ridden with glaring factual errors about federal and state law, proved too much for even the Chronicle’s conservative and credulous coverage of the agency. A week after blandly reporting the op-ed piece as a signal that ACCJC still had CCSF in its sights, education reporter Nanette Asimov did an about face in a piece that dissected the ham-handed misinformation point by point.

Asimov followed up the next day by ridiculing the commission in an article pointing out that a higher percentage of City College students transferred to a four-year university or earned an associate degree within six years than did students at all of the other colleges affiliated with members of the accrediting commission, as measured by the state’s latest “Student Success Score Card.”

Rather than admit the error Kinsella simply ignored the public exposure of his and Amador’s op-ed blunders when he testified last week before the Assembly Higher Education Committee on Bonta’s ACCJC reform bill.

“He got up and talked about how City College needed to accept reaccreditation candidacy,” Messer recalls. “He continued to make the same [discredited] argument. So while we cheer and feel victorious every time there’s something like that that helps to expose them, it doesn’t seem to actually achieve anything. It’s like trying to shoot a vampire or a werewolf without having any silver bullets. They just keep getting up again.”

“I think that they are in a bunker mentality,” says attorney and CCSF Trustee Rafael Mandelman, who is wary when it comes to ascribing motivations to a commission that has proven so difficult to read.

“In some sense they think they are just following the rules and doing what they’re supposed to do,” he continues. “And in another sense what they’ve done all the way along has clearly been so influenced by a set of biases and assumptions and bad judgments. But the third part of it is that they’re super-stubborn and arrogant and unwilling to acknowledge when they’ve made a mistake, and rather than pull away from doing something that is creating problems for the college and themselves, they double-down and go deeper.”

Related Topics:Accrediting Commission for Community and Junior CollegesCalifornia Public EducationCity College of San Francisco
Up Next