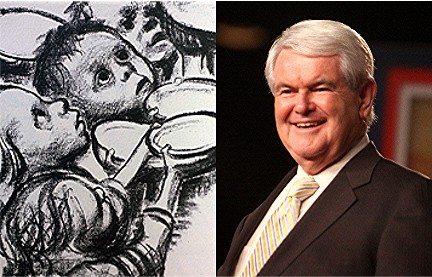 With one statement January 5, Newt Gingrich, who constantly reminds voters about his past as a college professor, managed to mangle the facts while resorting to old-fashioned racist stereotypes to gain votes. With his poll numbers sinking, and his presidential campaign desperate, Gingrich told a crowd at a senior citizens center in Plymouth, N.H., “I’m prepared, if the NAACP invites me, I’ll go to their convention and talk about why the African American community should demand paychecks and not be satisfied with food stamps.”

“The fact is, if I become your nominee we will make the key test very simple: Food stamps versus paychecks,” said Gingrich hoping to appeal to conservative white voters in New Hampshire and in upcoming primaries in South Carolina, Florida and other southern states. “Obama is the best food stamp president in American history. More people are on food stamps today because of Obama’s policies than ever in history. I would like to be the best paycheck president in American history.”

Despite the fact that Gingrich used the phrase, “the fact is,” he got his facts wrong in several ways.

About 40 million Americans (in 18.4 million households) receive food stamps, according to a U.S. Department of Agriculture report released in September, using the latest (2010) data.

Almost half (47 percent) of all Americans who receive food stamps are children. Another 8 percent are elderly. About 20 percent are disabled. These are not people who have a choice between paychecks and food stamps.

Moreover, there is no contradiction between earning a paycheck and receiving food stamps. Because of the explosion of low-wage jobs in America, many people who work are eligible to receive food stamps. According to the Department of Agriculture report, about five million non-elderly adults who receive food stamps are working. Another 4.4 million are unemployed and looking for work. Millions more have joined the ranks of “discouraged” workers who’ve given up looking for work after months, and in some cases more than a year, of unsuccessful job searches. That shouldn’t be surprising, given the reality that for more than two and one-half  years, the number of jobless Americans has outstripped the number of available job openings by more than four to one.

Among those lucky enough to have jobs, more than 10 million Americans are the “working poor,” whose incomes are below the federal poverty line, according to the Bureau of Labor Statistics. But Gingrich has a long history of supporting repeal of the minimum wage. An employee who works full time and earns the current federal minimum wage of $7.25 per hour would have an annual income $15,080 — not enough to be above the poverty line for a family of three.

Gingrich has also been a long-time critic of the food stamp program, rehearsing the “food stamps vs. pay check” rhetoric for some time. He’s suggested that Republicans use food stamps as a “symbol” of the Democratic Party. He has accused the program of massive fraud and waste, even though food stamp abuse (people getting stamps who are ineligible) is at an all-time low and accounts for a tiny proportion of all recipients, according to a study by the Government Accountability Office.

In Iowa last month, Gingrich said: “And we now give [food stamps] away as cash — you don’t get food stamps. You get a credit card, and the credit card can be used for anything. We have people who take their food stamp money and use it to go to Hawaii. They give food stamps now to millionaires because, after all, don’t you want to be compassionate?”

In fact, as PolitiFact pointed out, food stamps cannot be “used for anything,” as Gingrich claimed. Food stamp benefits are now loaded on to an electronic benefits transfer card, or EBT, similar to a debit card. Recipients can only purchase certain grocery items with the card. Beer and wine, for example, aren’t allowed. They cannot be used to purchase airline tickets to “go to Hawaii.” Gingrich is also wrong that “They give food stamps now to millionaires.” Only individuals and families with incomes below 130 percent of the poverty line are eligible to receive food stamps. That does not include millionaires.

And before Gingrich starts ranting about illegal immigrants ripping off and bankrupting the food stamp program, he might want to check his facts. Only three percent of food stamp participants (1.2 million individuals) are noncitizens (according to the USDA study), and it is highly likely that the overwhelming number of them are legal residents.

Big Coal vs. The Miner Who Knew Too Much

Why I'm Dancing for a Contract