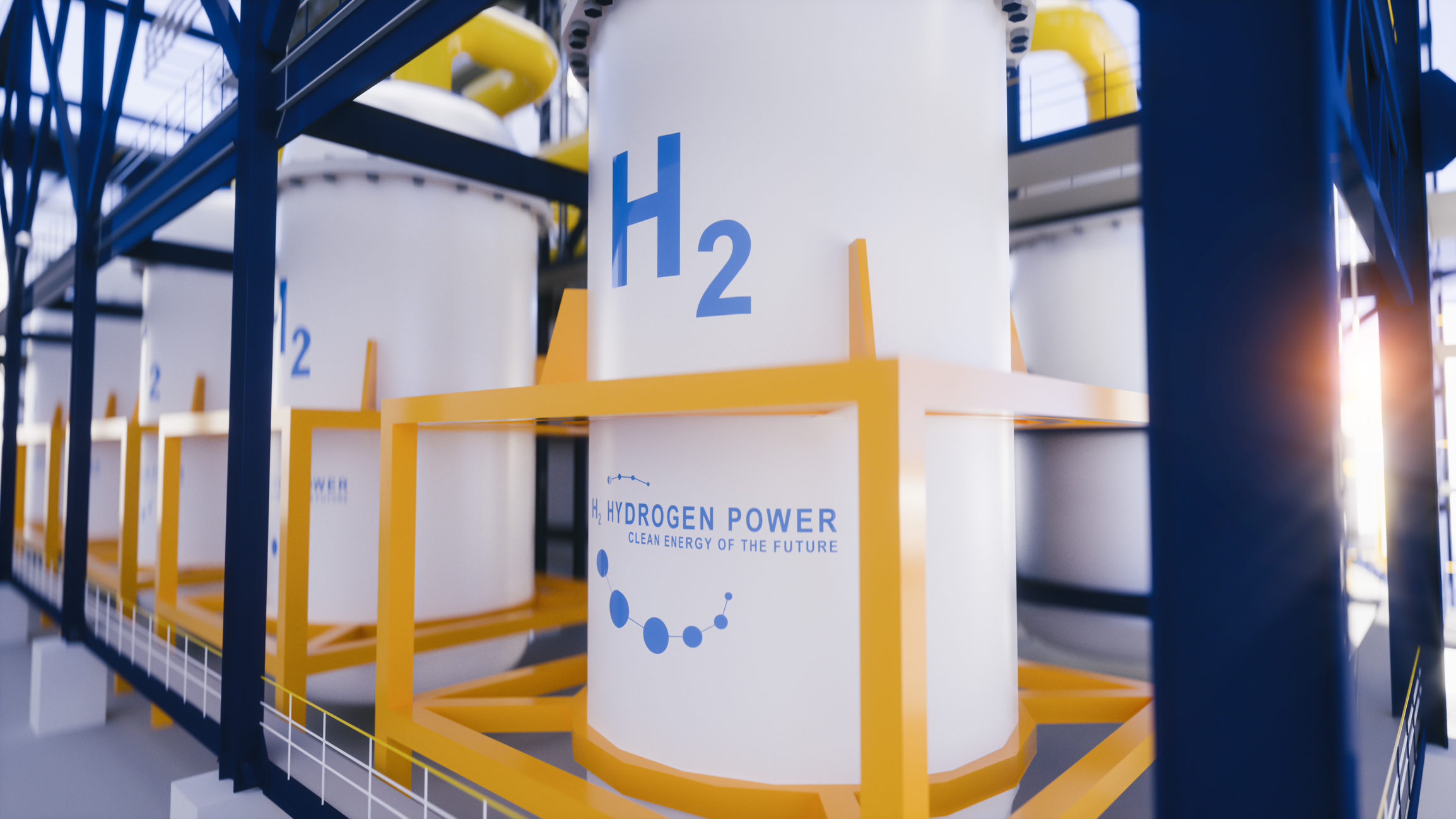 An artistic rendering of a hydrogen production facility. By Audio und Werbung.

The email landed in inboxes across New Mexico in the waning days of February, unexpectedly announcing the latest round in Gov. Michelle Lujan Grisham’s year-long fight for a hydrogen production center in the state. Without any previous public notice, it unveiled an agreement to create a new regional hydrogen development hub spanning New Mexico, Utah, Colorado and Wyoming, uniting those states’ governors but confounding environmentalists in the region due to its likely reliance on natural gas.

The governors hope to land a chunk of the $8 billion in congressional Bipartisan Infrastructure Law funds dedicated to creating at least four such hubs across the country, though their plan may well fail to meet major requirements of the program. The selection process is in its early stages, and hub projects won’t be chosen until later this year.

The agreement represents a major departure from New Mexico’s previous effort to land federal hydrogen funds. A hub gathers producers, consumers and infrastructure in one place, generally through tax breaks and other incentives. In the just-finished legislative session, four separate hydrogen hub plans died: two very quickly, two after tortuous debate. All were highly contentious because they relied on hydrogen made from natural gas — this at a time when many are trying to wean the state off of fossil fuel production. All promoted a hub in the San Juan Basin in the economically depressed, natural gas-producing northwest corner of the state. Antoinette Sedillo López (D-Albuquerque) calls the plans collectively “the Whac-A-Mole hydrogen bill.”

The new four-state plan, outlined in a memorandum of understanding, hasn’t been detailed yet, and the states will appoint a working group in the coming weeks to flesh it out, says Nora Meyers Sackett, press secretary to Gov. Lujan Grisham. As for an eventual plan, “That could be a close group of businesses in one New Mexico town or operations spread throughout several states,” she says. That spread could make the eventual proposal a tough sell.

The announcement shocked environmentalists after the bruising debates during the Legislature’s recent session. “It’s just unbelievable,” says Erik Schlenker-Goodrich, executive director of the Western Environmental Law Center. His group, along with a broad coalition of others stretching across the state, fought the four hydrogen bills throughout the legislative session.

Governors Lujan Grisham and Jared Polis of Colorado are progressive Democrats, and Governors Spencer Cox of Utah and Mark Gordon of Wyoming are conservative Republicans. The four governors are balanced at opposite ends of the political spectrum, but the states have previously collaborated to promote natural gas production in the region.

“You can see there’s almost a desperation to find new markets for natural gas.”

In 2019 and 2020, agencies from all four states joined the Western States and Tribal Nations transnational initiative to develop pipelines and export hubs to ship the region’s natural gas to Asian markets. WSTN also includes several Native American groups and natural gas producers. In 2020, one of those producers, Sempra LNG of San Diego, landed a liquid natural gas export project on the Pacific coast of Baja California, Mexico, after WSTN members — including Gov. Lujan Grisham — sent a letter of support to the Mexican government on the project’s behalf.

Linking those previous efforts with the new MOU, Schlenker-Goodrich says, “You can see there’s almost a desperation to find new markets for natural gas” on the part of these state governments.

Considering the long-term benefits to natural gas producers, the New Mexico Oil and Gas Association, the state’s largest oil and gas industry group, supported the hydrogen hub bills but didn’t lobby on the issue as vigorously as it lobbied against other environmental legislation. However, one of the bill’s strongest proponents was Jason Sandel, the president-elect of the trade group’s board of directors, though he introduced himself simply as “a businessman” during his fulsome testimony on behalf of the hydrogen bills.

His business is Aztec Well Service, which drills and maintains wells for oil and gas producers in the region, including all four states in the MOU. He’s also the chairman of the board of directors of the WSTN and a fundraiser for Lujan Grisham. In July of last year, he co-hosted an in-person fundraiser for her reelection campaign, and over the years he has contributed more than $10,000 to her campaigns for a U.S. House of Representatives seat and for governor of New Mexico.

The first deadline in the federal application process was March 8, when applicants — including the group of four states — proposed to the feds how the program should be structured.

But crafting a winning final proposal may be more difficult.

According to the U.S. Department of Energy, which is soliciting the proposals, successful hydrogen hubs will have “a network of clean hydrogen producers, potential clean hydrogen consumers, and connective infrastructure located in close proximity.”

The plans that didn’t make it through the New Mexico Legislature all revolved around a small but growing network of hydrogen-based businesses and legacy natural gas facilities in and around the San Juan Basin.

Hydrogen does not readily occur on Earth, so it has to be made. And that’s where environmental problems arise.

But on the surface, the MOU group doesn’t appear to meet the four federal requirements. The stretch of country from northwest New Mexico to southwest Wyoming shows few hydrogen projects outside of those in the San Juan Basin. The region is lightly populated, with neither the people nor hydrogen-intensive industry found in other possible hydrogen hub sites along the Gulf Coast, the Northeast states or the West Coast. And there is currently no major dedicated hydrogen pipeline infrastructure in the region.

Finally, it’s roughly 500 miles from Farmington, New Mexico, to Rock Springs, Wyoming, the two closest natural gas production centers in the two most-distant states. This doesn’t appear to meet the “close proximity” requirement. But that natural gas is key to the proposal.

The U.S. government, the E.U. and the International Energy Agency have called for dramatic increases in hydrogen use to help curb global warming. That’s because when it’s run through a fuel cell, hydrogen produces electricity with pure water and heat as its only byproducts. When burned in industrial processes — making steel or concrete for example — it creates far less pollution than traditional fuels like coal or natural gas.

But hydrogen does not readily occur on Earth (as the lightest element, it just floats into space), so it has to be made. And that’s where environmental problems arise — both in the original state proposals and with any likely MOU plan.

Hydrogen is graded by color, each hue reflecting a different method of creation and carbon footprint. The most carbon-neutral, so-called green hydrogen, uses renewable energy to zap water molecules, breaking them into component hydrogen and oxygen atoms. But that is energy-intensive and expensive. Plus, there isn’t any extra water in the region to use.

Heating natural gas under pressure to crack off hydrogen is the most common method. Natural gas is predominantly methane, which is a carbon atom with four hydrogen atoms. If you can capture and sequester the resulting carbon underground, that makes “blue” hydrogen. Letting the CO2 escape makes climate-damaging “gray” hydrogen.

Everyone knows that CO2 is a heat-trapping, global-warming gas. But the methane in natural gas is up to 80 times more potent than CO2 in the short term, and it commonly leaks from gas fields, transmission pipelines or other facilities, creating another direction from which blue hydrogen production could threaten the climate.

In fact, a recent study from the Institute for Energy Economics and Financial Analysis finds that blue hydrogen is not all it’s cracked up to be, as large-scale carbon sequestration projects rarely meet their goals. More than half of New Mexico’s greenhouse gas emissions come from the oil and gas industry — possibly a lot more. That, combined with known problems in monitoring and stopping natural gas field emissions, makes hydrogen produced from natural gas a non-starter for many in the environmental community.

New technologies could make green hydrogen cheaper to produce than blue by 2030. If that happens, fossil fuel based facilities would be priced out of business.

Furthermore, the latest report from the Intergovernmental Panel on Climate Change, released four days after the MOU, says that without rapid, dramatic decreases in CO2 and methane emissions — no matter the source — the planet will be locked into increasing rates of disease, deaths and costly disasters. And the IPCC says a primary way to reduce the emissions of these greenhouse gasses is to reduce and replace the use of fossil fuels across the board.

All of the MOU states have natural gas fields, and at least two of the federal hydrogen hubs are to be in “regions of the United States with the greatest natural gas resources” according to the Bipartisan Infrastructure Law. This obviously concerns environmentalists.

But the biggest hurdle for fossil fuel based blue hydrogen may be a timeline of another sort. According to a study by BloombergNEF, new technologies could make green hydrogen cheaper to produce than blue by 2030. If that happens, fossil fuel based facilities and carbon capture projects would be priced out of business and become lost investments.

One of New Mexico’s senators, Martin Heinrich (D), has promoted hydrogen production in the state for as long as the governor. But during a U.S. Senate hearing on hydrogen in February — at the same time the state Legislature was debating hydrogen hubs — he questioned the long-term viability of blue hydrogen. He quoted the Bloomberg study and asked industry representatives if new blue hydrogen projects are worth the risk.

“If you do a big expensive project that requires carbon capture and sequestration, you really need 20, 30 years to make that money back,” he said. “How do we avoid making long-term investments that end up being non-cost effective in just a few years?” The experts on the panel didn’t fully dismiss the possibility.

But Heinrich’s question underlies the bigger issue of fossil fuels in New Mexico: How does the state build a sustainable economy that’s good for both its people and the wider environment?

Meyers Sackett said that the governor’s office and state agencies worked for “several weeks” on the multistate MOU — at the same time that state legislators were fighting over the governor’s hydrogen bill. They have another couple of months to figure out their final plan, as the federal proposal deadline is expected in May.

Gov. Lujan Grisham’s office has kept to the same talking points through months of promoting a hydrogen plan as part of the state’s economic and environmental future. More than once Meyers Sackett has said, “A clean hydrogen economy is here to stay in New Mexico, with or without legislation.” And the MOU continues that push.

Will California’s Fossil Fuel Industry Use the Ukraine War to Undermine Oil and Gas Legislation?