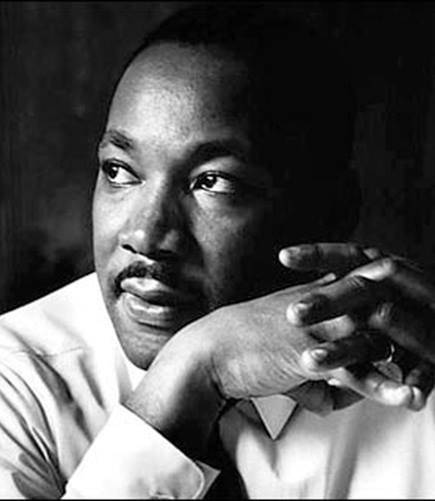 Most Americans today know that Reverend Martin Luther King Jr. was killed 46 years ago in Memphis, Tennessee. But fewer know why he was there.

King went to Memphis to support African American garbage workers, who were on strike to protest unsafe conditions, abusive white supervisors, and low wages — and to gain recognition for their union. Their picket signs relayed a simple but profound message: “I Am A Man.”

If he were still alive, King would surely join the growing campaigns to unionize and improve pay and working conditions for janitors, security guards, hotel workers, hospital employees, farmworkers, grocery employees, and others who earn poverty-level wages. He might disrupt Walmart stockholder meetings to demand that the company pay employees a living wage, join fast-food workers in their quest for decent pay, and urge consumers to boycott the Gap, Walmart and other companies until they stop manufacturing their products in overseas sweatshops. He’d also be working with unions, community groups, and fellow clergy to pressure Congress to raise the federal minimum wage, which was one of the demands of the March on Washington.

Today we view King as something of a saint, his birthday a national holiday, and his name adorning schools and street signs. But in his day, the establishment considered King a dangerous troublemaker. He was harassed by the FBI and vilified in the media. He began his activism in Montgomery, Alabama, as a crusader against the nation’s racial caste system, but the struggle for civil rights radicalized him into a fighter for broader economic and social justice. He recognized the limits of breaking down legal segregation. What good was winning the right to eat at a dime-store lunch counter if you couldn’t afford a hamburger and a Coke?

A half-century before Occupy Wall Street, King warned about the “gulf between the haves and the have-nots” and insisted that America needed a “better distribution of wealth.”

During the 1960s, King became increasingly committed to building bridges between the civil rights and labor movements. Invited to address the AFL-CIO’s annual convention in 1961, King observed that

“the labor movement did not diminish the strength of the nation but enlarged it. By raising the living standards of millions, labor miraculously created a market for industry and lifted the whole nation to undreamed of levels of production. Those who today attack labor forget these simple truths, but history remembers them.”

Several major unions, especially the United Auto Workers and the International Ladies Garment Workers, had donated money to civil rights groups, supported the sit-ins and freedom rides, and helped organize the famous 1963 March on Washington, where King delivered his “I Have a Dream” speech. Thus, it was not surprising that Memphis’ civil rights and union leaders invited King to their city to help draw national attention to the garbage strike.

The strike began over the mistreatment of 22 sewer workers who reported for work on January 31, 1968, and were sent home when it began raining. White employees were not sent home. When the rain stopped after an hour or so, they continued to work and were paid for the full day, while the black workers lost a day’s pay. The next day, two sanitation workers, Echol Cole and Robert Walker, were crushed to death by a malfunctioning city garbage truck.

These two incidents epitomized the workers’ long-standing grievances. Wages averaged about $1.70 per hour. Forty percent of the workers qualified for welfare to supplement their poverty-level salaries. They had almost no health care benefits, pensions, or vacations. They worked in filthy conditions, and lacked basic amenities like a place to eat and shower. They were required to haul leaky garbage tubs that spilled maggots and debris on them. White supervisors called them “boy” and arbitrarily sent them home without pay for minor infractions that they overlooked when white workers did the same thing. The workers asked Memphis Mayor Henry Loeb and the City Council to improve their working conditions, but they refused to do so.

On February 12, 1,300 black sanitation workers walked off their jobs, demanding that the city recognize their union (the American Federation of State, County and Municipal Employees, AFSCME) and negotiate to resolve their grievances. They also demanded a pay increase to $2.35 an hour, overtime pay, and merit promotions without regard to race.

For the next several months, city officials refused to negotiate with the union. In private, Mayor Loeb reportedly told associates, “I’ll never be known as the mayor who signed a contract with a Negro union.”

The city used non-union workers and supervisors to pick up garbage downtown, from hospitals, and in residential areas. Even so, thousands of tons of garbage piled up. Community support for the strikers grew steadily. The NAACP endorsed the strike and sponsored all-night vigils and pickets at City Hall. On February 23, 1,500 people — strikers and their supporters — packed City Hall chambers, but the all-white City Council voted to back the mayor’s refusal to recognize the union.

Local ministers (led by Rev. James Lawson) formed a citywide group to support the strikers. They called on their congregants to participate in rallies and marches, donate to the strike fund, and boycott downtown stores in order to get business leaders to pressure city officials to negotiate with the union. On Sunday, March 3, an eight-hour gospel singing marathon at Mason Temple raised money for strikers. The next day, the beginning of the fourth week of the strike, 500 white labor unionists from Memphis and other Tennessee cities joined black ministers and sanitation workers in their daily downtown march.

On several occasions, the police attacked the strikes with clubs and mace. They harassed protestors and even arrested strike leaders for jaywalking. On March 5, 117 strikers and supporters were arrested for sitting in at city hall. Six days later, hundreds of students skipped high school to participate in a march led by black ministers. Two students were arrested.

At the rallies, ministers and union activists linked the workers’ grievances with the black community’s long-standing anger over police abuse, slum housing, segregated and inadequate schools, and the concentration of blacks in the lowest-paying, dirtiest jobs.

Despite the escalating protest, the city establishment dug in its heals, refusing to compromise and demanding that the strikers return to work or risk losing their jobs. The local daily newspaper, the Commercial Appeal, consistently opposed the strikers. “Memphis garbage strikers have turned an illegal walk out into anarchy,” it wrote in one editorial, “and Mayor Henry Loeb is exactly right when he says, ‘We can’t submit to this sort of thing!'”

With tensions rising and no compromise in sight, local ministers and AFSCME invited Dr. King to Memphis to re-energize the local movement, lift the strikers’ flagging spirits, and encourage them to remain nonviolent. On Monday, March 18, King spoke at a rally attended by 17,000 people and called for a citywide march. His speech triggered national media attention, and catalyzed the rest of the labor movement to expand its support for the strikers.

King returned to Memphis on Thursday, March 28, to lead the march. The police moved into crowds with night sticks, mace, tear gas, and gunfire. The police arrested 280 people. 60 were injured. A 16-year-old boy, Larry Payne, was shot to death. The state legislature authorized a 7 p.m. curfew and 4,000 National Guardsmen moved in. The next day, 300 sanitation workers and supporters marched peacefully and silently to City Hall — escorted by five armored personnel carriers, five jeeps, three large military trucks, and dozens of Guardsmen with bayonets fixed. President Lyndon Johnson and AFL-CIO President George Meany offered their help in resolving the dispute, but Mayor Loeb turned them down.

King came back to Memphis on Wednesday, April 3 to address a rally to pressure city officials to negotiate a compromise solution to the strike. That night, at the Mason Temple — packed with over 10,000 black workers and residents, ministers, white union members, white liberals, and students — King delivered what would turn out to be his last speech. He emphasized the linked fate of the civil rights and labor movements:

“Memphis Negroes are almost entirely a working people. Our needs are identical with labor’s needs — decent wages, fair working conditions, livable housing, old age security, health and welfare measures, conditions in which families can grow, have education for their children and respect in the community. That is why Negroes support labor’s demands and fight laws which curb labor. That is why the labor-hater and labor-baiter is virtually always a twin-headed creature spewing anti-Negro epithets from one mouth and anti-labor propaganda from the other mouth.”

The next day, James Earl Ray assassinated King as he stood on the balcony outside his room at the Lorraine Hotel.

As Time magazine noted at the time: “Ironically, it was the violence of Martin Luther King’s death rather than the nonviolence of his methods that ultimately broke the city’s resistance” and led to the strike settlement.

President Johnson ordered federal troops to Memphis and instructed Undersecretary of Labor James Reynolds to mediate the conflict and settle the strike. The following week, King’s widow, Coretta Scott King, and dozens of national figures led a peaceful memorial march through downtown Memphis in tribute to Dr. King and in support of the strike. Local business leaders, tired of the boycott and the downtown demonstrations, urged Loeb to come to terms with the strikers.

On April 16, union leaders and city officials reached an agreement. The City Council passed a resolution recognizing the union. The 14-month contract included union dues check-off, a grievance procedure, and wage increases of 10 cents per hour May 1 and another five cents in September. Members of AFSCME Local 1733 approved the agreement unanimously and ended their strike.

The settlement wasn’t only a victory for the sanitation workers. The strike had mobilized the African American community, which subsequently became increasingly involved in local politics and school and jobs issues, and which developed new allies in the white community.

In his final speech, King, only 39 at the time, told the crowd about a bomb threat on his plane from Atlanta that morning, saying he knew that his life was constantly in danger because of his political activism.

“I would like to live a long life,” he said. “Longevity has its place. But I’m not concerned about that now. I just want to do God’s will. And he’s allowed me to go up to the mountain, and I’ve looked over, and I’ve seen the promised land. I may not get there with you. But I want you to know tonight that we as a people will get to the promised land.”

We haven’t gotten there yet. But Dr. King is still with us in spirit. The best way to honor his memory is to continue the struggle for human dignity, workers’ rights, living wages, and social justice.

The Rise of Income Tax Inequality