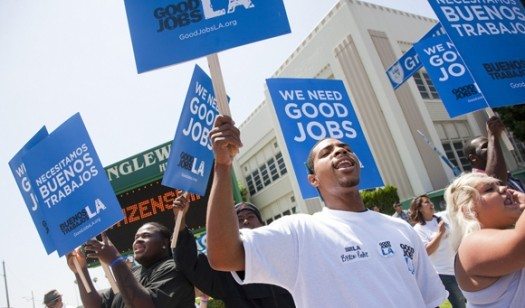 What is the single biggest economic problem facing people early in this century? It is not the budget deficit or national debt. It is the eroding and disappearing of good jobs. People with good jobs – jobs that provide decent pay and benefits and the flexibility to be able to take care of one’s family – are the fuel of the economy and the basis for broadly shared prosperity. Good jobs, and the things that go with them – a good education, affordable health care, and a secure retirement – are the very definition of a successful economy.

The public gets it. When asked to identify “the single biggest problem facing this country today,” 40 percent answered “jobs and the economy.” Number two was “budget deficit/national debt,” at six percent.

Four years after the official end of the Great Recession, the real economy – not corporate profits or the stock market – remains stalled. The proportion of Americans working is the lowest in 30 years, or basically since women started entering the work force in large numbers. Most of the jobs that have been created since the recession pay low wages. Long-term unemployment also is at levels well above anything since the Great Depression. And income for all but the richest has gone down.

So why does Washington and elite discussion remain focused on the debt and deficit? And what will it take to move the politics of the nation to take on what the public correctly understands is the central economic issue?

The fundamental reason that good jobs is not the defining issue is that an economy in which some people have a lot while more and more scrape buy is working just fine for the wealthy and huge corporations that control our politics and media. Personally, the rich are doing better than ever, as their inflated pay and corporate profits are supported by the financialization of the U.S. economy, low-wage service sector jobs here. And low-wage manufacturing and importable services abroad. The middle class in the U.S. may be getting squeezed and shrinking, but it’s still broad and big enough to fuel demand for U.S. goods and services. The disasters to come from the lack of retirement savings, high student loan debt and long-term wage stagnation are not stopping the rich from getting richer today.

The interest of the ruling elites has been powerfully popularized by the right’s highly disciplined, focused narrative on the national debt and budget deficits. While the motivation here is ideological – to shrink those government services and activities that improve social welfare or regulate the markets – the weapon has been convincing Americans that the national debt is an unconscionable burden on our children, that government deficits are as unsustainable as household deficits, and that taxes are paid to a wasteful, corrupt government. Instead, the right insists that businesses are the “job creators” and that any effort to interfere with what business thinks is best will put people out of work.

As a result, the great public concern about the lack of good jobs doesn’t translate into support for government action – or any action, other than to do your personal best and pray that things get better. People don’t believe that there are solutions for good jobs in a global economy. They certainly don’t see that government has a role in creating jobs or that tax dollars could be spent on effective job creation. And while they support regulations to improve job quality, they are very susceptible to pro-business arguments.

What do we do about it? Here’s an overview of a strategy. One, we need to make good jobs the central, driving focus of progressive discourse, just as the right has put deficits/debt/limited government at the center of their policy, politics and communication. That requires clearly linking every issue to the need to create good jobs that will enable working- and middle-class families to have opportunity and security. In doing that, we need to be talking about good jobs in a multi-dimensional way. Good jobs are about having enough pay to support your family, flexibility to allow you to care for your family – from children to elders – and access to good, affordable education, affordable health care and a secure retirement.

Two, we need to center our discourse on good jobs in a powerful, values-based story about how we create an America that works for all of us. This story starts with a vision of an America that provides liberty, justice, and prosperity for all. It reinforces the notion that people believe but rarely hear: Working families and the middle class are the real engines of the economy. It provides examples from American history of how decisions we have made together built the great American middle class. And it follows those with a vision and example of how we can make decisions together in the 21st century to create good jobs for everyone in America. It clearly identifies who is responsible for the mess we’re in – the super-rich and corporations who game the system at our expense and buy off our government. And finally, the story empowers people as the heroes who can take action for change.

Third, we need to champion a program of policies that will work to create good jobs. We have policies and innovative ideas that will work today, many of which will be discussed June 4 in Washington when the Roosevelt Institute holds a daylong conference on A Bold Approach to the Jobs Emergency. Certainly, we will need to continue to develop policy solutions that address major challenges like globalization and technology. But we should be clear that it is in our power now to redirect economic policy to dramatically improve the quality of the jobs Americans now hold and to create millions of new good jobs for people who are out of work.

Fourth, we need to organize campaigns for good jobs, starting with a focus at the local and state level. Even though municipalities and states don’t have as many resources as the federal government, there are policies that can be taken locally to create a new economic paradigm. The success of those policies will be more immediately visible to people. The lessons learned in building popular support for these policies will be transferable to other places and to the federal level.

Finally, we need to make good jobs a defining issue of the 2016 election. To reach that goal, we will need to do all of the above, with a strategy that brings the work together for the 2016 election. In 2014, we should focus on a few U.S. Senate and congressional elections to experiment with the best approaches. We can take a page from specific strategies used from 2007-2008, which made health care the central issue of the 2008 election.

American’s historical optimism is being deeply challenged by the squeezing, and indeed crushing, of the middle class. Our job is to rekindle that optimism and make it a powerful force for change. We can build an America that works for all of us by building a movement to demand good jobs for everyone.

Related Topics:U.S. Job Creation
Up Next

What Does It Take to Employ L.A.’s Poorest & Most Disadvantaged?