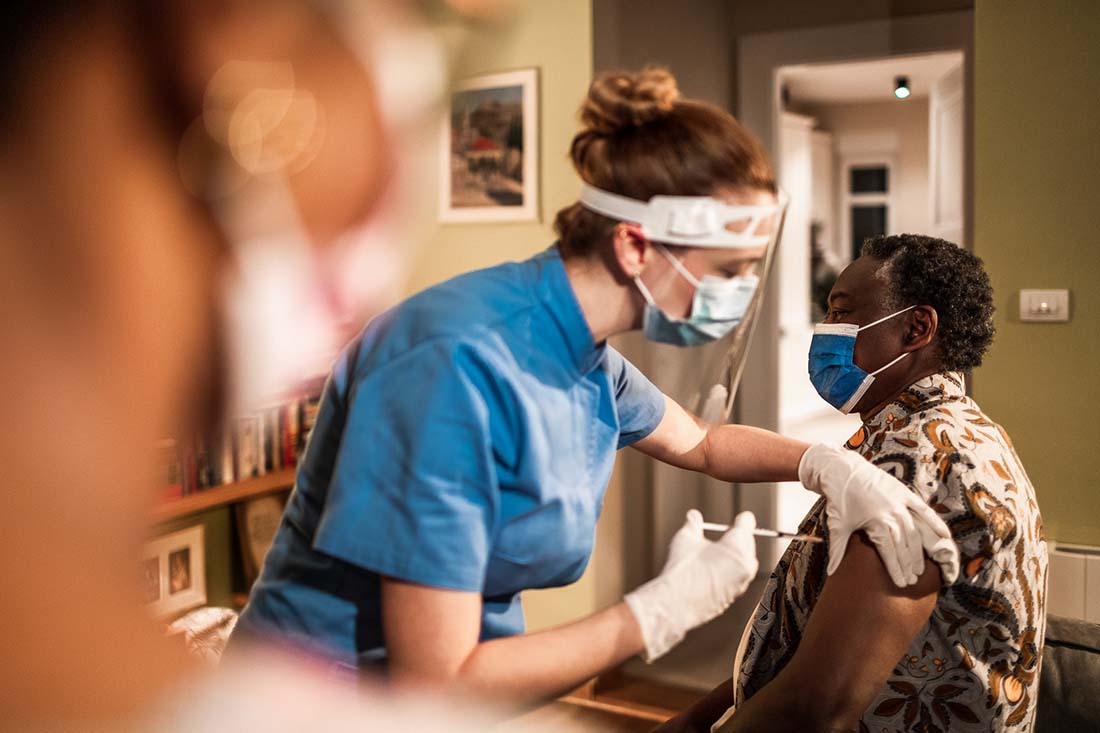 The early months of the coronavirus’s arrival in the U.S. exacted a horrific toll on the nation’s elderly, particularly those in skilled nursing and long-term care (LTC) facilities. In California, the pandemic’s deadly path through nursing homes exposed systemic staffing shortages, inadequate safety measures and the slipshod manner in which the industry is overseen.

Nearly two years later, some of the nation’s most vulnerable residents are again at risk. And if their uptake of booster shots doesn’t escalate rapidly, experts fear another wave of severe illness and COVID death despite relatively high rates of vaccination among the elderly.

That reality would settle hard in California, where roughly one in eight COVID deaths have occurred at LTC facilities. The most recent data from the federal Centers for Medicare and Medicaid Services (CMS) shows that 9,397 nursing home residents have died from the virus, 12.4% of the overall toll of 75,167 Californians lost to the disease.

Much of that total came early in the pandemic, when the state’s LTC system failed to respond with urgency to the crisis and individual facilities were found to have been operating for years under wildly unsanitary conditions. Residents of LTC facilities, who were already among the most susceptible to the worst of COVID’s ravages, found themselves essentially trapped inside viral superspreader sites.

With the omicron strain on the rise, the concern is that elderly who are vaxxed but not boosted will bear a terrible burden this winter.

Despite all that, part of the problem right now may be that concerns over nursing home populations have been largely forgotten amid the larger COVID conversation. Once the vaccination rate for residents hit an acceptable level — in California, it’s 88.4% — the urgency surrounding outreach to LTC facilities began to dissipate.

The state cannot allow that trend to continue. And it may take Gov. Gavin Newsom leaning on the California Department of Public Health in order to get a booster program for those in nursing homes into place — sooner, not later.

Based on data collected by the Centers for Disease Control and Prevention (CDC), the signs are ominous. In California, only 47.3% of nursing home residents have received their booster shot. That’s alarming to researchers and epidemiologists, who note that the vaccines themselves have waning protection against COVID, especially in older people. With the delta variant and the even more contagious omicron strain on the rise, the concern is that elderly who are vaxxed but not boosted will bear a terrible burden this winter. (Note: Slightly more than a third of California LTC facilities reported data to the CDC.)

In a media briefing last week, CDC Director Rochelle Walensky noted “the urgent need to provide protection to our aging populations,” and said the government was using the recently formed Federal Retail Pharmacy Program to match LTC facilities with area pharmacies for booster shots. But that’s a far cry from the vaccination campaign of roughly a year ago, when the federal government forged large-scale national agreements with health retail giants like CVS and Walgreens to get doses directly to nursing home residents — a top priority.

The fully vaccinated rate among California nursing home residents is right in line with the rest of the country, so it’s baffling that its booster rate is so far below the national average.

“My sense is that every nursing home is figuring this out on their own,” Brian McGarry, assistant professor at the University of Rochester School of Medicine, told CNN. McGarry, whose research focuses on aging, said he has heard from some nursing homes that there aren’t enough pharmacists in their area for a store to be able to send someone to a LTC facility and deliver boosters on site.

The fully vaccinated rate among California nursing home residents is right in line with the rest of the country, so it’s baffling that its booster rate is so far below the national average of 54.7%. California’s 47.3% figure is more in line with conservative-leaning Southern states than with fellow liberal states in the Northeast. Most states west of the Rockies, for that matter, have higher rates than California. (The CDC considers getting a booster equal in value to taking an additional primary shot, for those who are already fully vaxxed.)

Then again, the nursing home industry here has been under heavy scrutiny for some time, and not just because of its broad failures at the outset of the pandemic. That much was made clear in October, when a state legislative hearing on the matter devolved into a sustained criticism of both the operators of some of the worst-run facilities and the Department of Public Health, which is supposed to govern them.

“Where is the proactive, patient centered, public safety approach here?” asked Assemblymember Jim Wood, a Democrat from Santa Rosa who chairs the Assembly Health Committee. “Because I don’t feel it right now…Here we sit. We have to wait for news articles. We have to wait for people to die.”

His words were spoken before the scope of this newest wave of the virus was known, and before it became apparent that California’s nursing homes would likely have to devise their own solutions to an impending surge of COVID infections among their residents. Given their abysmal track record, it’s incumbent on the state itself to devise an integrated and meaningfully funded booster program for the elderly. Otherwise, it will experience a grim reminder of what happens when a virus meets a genuinely vulnerable population.