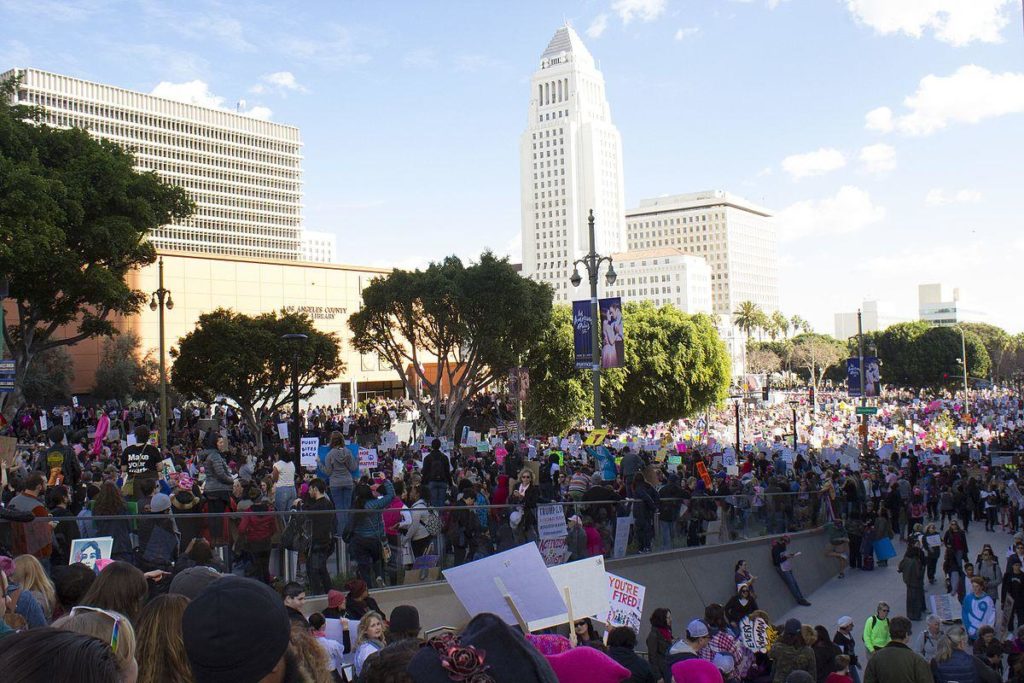 “Feminism, Back by Popular Demand”
– Sign at Saturday’s demonstration

They were young and old, women and men, black, brown and white and everyone in between. All crushed together in a crowd officially estimated at 750,000 – far larger than expected but mellow, good-natured and happy to be seen.

The Los Angeles marchers were welcomed by a giant banner in Pershing Square declaring the theme of the Saturday event: “On the shoulders of those who came before you and in service of generations to come. Thank you for showing up for Democracy and Justice.”

The homemade signs were funny, poignant and angry:

I came to the march (which was co-chaired by Emiliana Guereca, an event producer, and TV producer Deena Katz) on a bus arranged by Westside City Councilmember Mike Bonin, and sat next to a middle school teacher I didn’t know. Apparently, like many at the march, she had never before been to a demonstration – disliking crowds and fearing possible violence. But after a lot of her smart friends said they were going, she decided to join. And loved it. 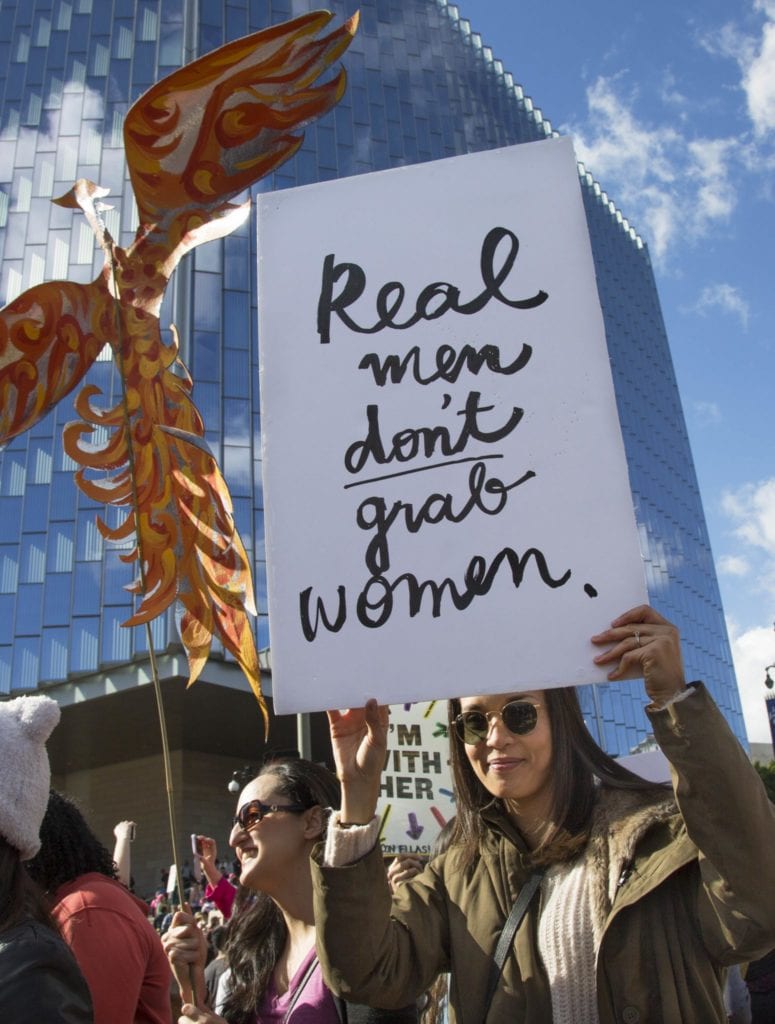 Thanks to the skill of the organizers and coordination with the L.A. Police Department, there was nary a uniformed officer in sight, adding to the celebratory nature of the march. This added to the feeling that the march represented the majority sentiment, not the fringe. That message was brought home by County Supervisor Hilda Solis, who proclaimed, “This is the real inauguration of the people.”

Nearly all my friends went to the march, but I saw only five people I knew — that’s how big the turnout was. While my group was trapped in the crowd at Pershing Square for two hours, tens of thousands of other people were stuck on Olive, Sixth and Fifth streets, all the way to Broadway. When we finally did start to march we never made it to City Hall and missed the welcome from Mayor Eric Garcetti and other speakers, as well as the opportunity to sign up for future involvement. A huge line of marchers continued down Spring Street for another hour, moving past the speeches as people mingled to chant, buy food from vendors and bask in the presence of so many declared feminists. Transportation home by Metro was backed up for hours.

While I was marching in L.A., my son, daughter and grandkids were in the Oakland Women’s March, and good friends were in Washington, D.C.’s This kind of movement mobilization, for an idea and a social cause — as opposed to a candidate — bodes well for the future of feminism – a feminism that links the issues that oppress women and retard their ability to be self-determining. The beauty of the Women’s March is that immigrants and workers, people of color and LGBTQ activists, reproductive rights advocates and environmental defenders, all can see themselves in one movement with different priorities. We used to call that pluralism in the 1970s and it’s what we need now to rescue our progressive vision.

As beautifully expressed by 18-year-old Get Lit poet Jessica Roma, in her spoken-word presentation, “I was taught to be a woman meant to be rescued by someone else.” There is no one coming to rescue us but the power of our own organizing, advocacy and creativity. It’s time to get to work.

Labor Secretary Nominee’s Company Has Been a Discrimination Lawsuit Magnet