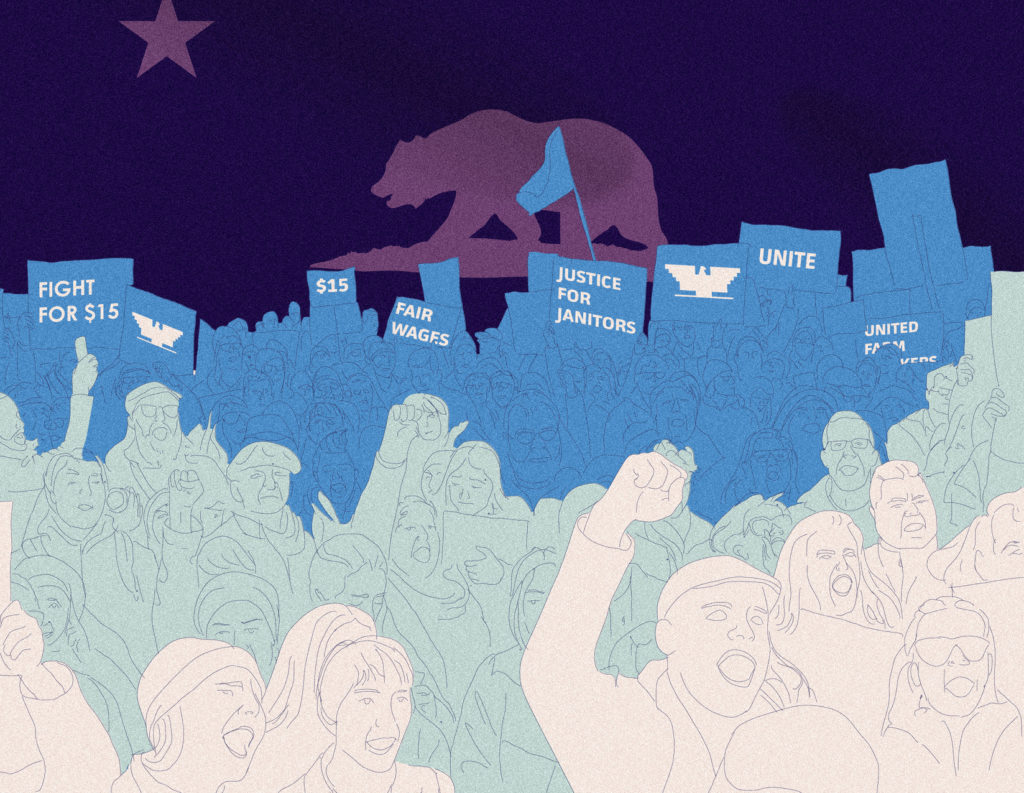 An upcoming Supreme Court case could cripple unions — or inspire a new wave of creativity.

A conservative U.S. Supreme Court may be preparing to drop a bomb on the country’s public sector unions, but California has heard it ticking for years. When the court agreed to hear Janus v. American Federation of State, County and Municipal Employees, Council 31, Joshua Pechthalt, president of the California Federation of Teachers (CFT), said his union and others in the state had already been working to absorb the blow. The case could strip public agency unions of much of their funding, and he admitted the effects on California’s labor movement could be devastating. Or, for some of the same reasons, they could be reinvigorating.

“I think [Janus] is going to hurt, but it need not be the end of the world,” said Pechthalt. “Frankly, we’re going to have to do the kind of organizing that we should have been doing all these many years. I think the labor movement got a little bit complacent.”

In states like Wisconsin, Kentucky, Iowa and Michigan, where Republican state administrations have slashed union power in recent years, the Janus case looks to be a crippling blow in a national turn against unions. But California is going the other way, passing pro-union legislation such as a 2017 bill guaranteeing union access to government employees during job orientations. The Golden State is an exception in the national labor movement’s fortunes, and Janus will put that status to the test.

“If unions play things wonderfully, Janus will just make life more difficult for them. If they don’t, it’ll just be a disaster.”

While non-union workers in a unionized department are not required to pay full union dues,  under a unanimous 1977 U.S. Supreme Court case called Abood v. Detroit Board of Education, they must pay lesser fees to support contract bargaining, from which they benefit.

In a statement to Capital & Main, Diana Rickert of the Illinois-based Liberty Justice Center, which is representing Mr. Janus, wrote: “Today, Mark Janus and more than 5.5 million other government employees in America are forced to pay money to a union in order to keep their jobs . . . The First Amendment gives everyone the right to choose which organizations they will and won’t join or support financially.”

Momentum for this argument has been building for years. In the 2014 U.S. Supreme Court case Harris v. Quinn, the court ruled that homecare workers in Illinois did not have to pay agency fees because they were not truly public employees, and Justice Samuel Alito, writing for the majority, basically invited more challenges to Abood.

The two organizations representing Janus, including the National Right to Work Legal Defense Foundation, seem poised for a victory. Nelson Lichtenstein, a labor historian at the University of California, Santa Barbara, pointed out the potential danger for organized labor, noting that from one-third to about one-half of all people represented by a union are not members of that union, and may choose not to pay agency fees.

“If unions play things wonderfully, it will just make life more difficult for them. And if they don’t, it’ll just be a disaster,” Lichtenstein added.

“This is a new period of American history. We have to win people over to the fact that we’re stronger when we stick together in a union.”

And so all eyes turn to California. Though it does not have the high percentages of union members found in New York, Alaska and a few other states, California’s labor movement has a reputation as the most innovative in the country.

Ruth Milkman, a labor expert at the City University of New York and a former longtime professor at the University of California, Los Angeles, points out that the state earned this reputation, paradoxically, by having a relatively backwater movement during the height of industrial unionization. With less heavy industry than states like Michigan, Ohio or Pennsylvania had earlier in the 20th century, the labor movement in California – and particularly the Service Employees International Union, or SEIU – would later focus sharply on organizing the service sector, with its hospital and government workers, and even the entertainment industry.

When globalization shifted heavy manufacturing to Mexico, South America and Asia toward the end of the last century, gutting powerful unions like the United Auto Workers and the United Steelworkers, service unions were poised to grow and California knew better than anyone how to do it.

“In the late 20th century and continuing into the new century, the SEIU became the engine of growth for organized labor,” said Milkman.

California is the place, Milkman notes, where new classes of workers are created. She points to the late-1990s SEIU campaign to recruit home health-care workers. They were categorized as independent contractors paid by Medi-Cal and thus not eligible for unionization, but the SEIU and others prevailed on the administration of Gov. Gray Davis and the state legislature and passed a 1999 law making these workers public employees and changing their eligibility. This precipitated what Milkman called the biggest National Labor Relations Board election in American history, adding that it brought nearly 100,000 homecare workers into the SEIU – a move that has since been replicated around the country, and then with publicly funded childcare workers, as well.

Similarly, California unions have a legacy of organizing immigrant labor, building off the pioneering efforts of Cesar Chavez and the United Farm Workers. This work is still evident in UNITE HERE’s success in organizing hospitality workers across California, as well as the the SEIU’s Justice for Janitors campaign that began in the late 1980s and continues today. California unions have also been firmly behind the campaign for a $15 hourly minimum wage, which many see as a first step to organizing fast-food workers.

“A lot of the success that [California unions have] had over the past two decades can be attributed to their success in the political arena, and that has created a more stable environment, particularly for public sector unionism, but also for unionism generally,” said John Logan, a labor historian at San Francisco State University. “While in the rest of the country, at the state level, there’s been a number of very brazen attacks on unionism, particularly after [Republican electoral gains in] 2010.”

Post-Janus, California unions will certainly lose some of the money that gave them that political clout, but they still have the benefit of a pro-union state government.

“In contrast to Democratic Party campaigns or Bernie Sanders rallies, unions don’t go away.
That is important.”

California bucks national trends by still creating quite a bit of pro-union legislation. Logan noted there have been proposals about changes to the right of fair representation, so that non-union members in a post-Janus era would have to either pay for the union to represent them in a grievance or have the option of hiring a private attorney. But California, like every other state, is restricted by the National Labor Relations Act, so there are only so many legislative responses possible. The principal response to Janus is a call for old-school grassroots organizing.

“A number of our unions and our affiliates are using this as a time to go back to basics,” said Angie Wei, chief of staff at the California Labor Federation. “Which is one-on-one conversations, member-to-member, at the worksites. And building a permanent structure for the union … building power from the ground up.”

“Some of the [agency fee] people have just never been talked to about the union and don’t understand it,” said Bob Schoonover, President of SEIU Local 721 in Southern California. Like the public in general, he said, these workers are largely unaware of union influence in matters beyond members’ wages and benefits. For instance, California unions are also solidly behind single-payer health care, and property tax reform and increased school budgets.

Schoonover pointed out that his local was part of a health-care reorganization under the Affordable Care Act in Los Angeles County, which brought public health, mental health and the hospital system under one umbrella, making it more efficient for everyone. This is how unions can demonstrate their importance to all working people.

“The thing about a union, [like] the NRA or the Chamber of Commerce, is they’re there all the time,” said Nelson Lichtenstein. “In contrast to Democratic Party campaigns or Bernie Sanders rallies, they don’t go away. They have their people in there lobbying. That is important.”

Planned Parenthood is another one of these permanent institutions, Lichtenstein noted, but he added that progressives have very few others. The right has more: mega-churches, business groups, phalanxes of think tanks. So both unions and Planned Parenthood are under attack all the time. “I link the two because both are kind of organizational, social institutions that are widespread and have constituencies. The right understands that’s a threat.”

The CFT’s Joshua Pechthalt said it’s a defining moment for labor. “This is sort of a new period of American history: When people don’t see a collective response as being valuable, or possible, they opt for individual answers,” he said. “We have to win people over to the fact that we’re stronger when we stick together in a union.”

Judging Janus: A Timeline of the Right’s War on Workers