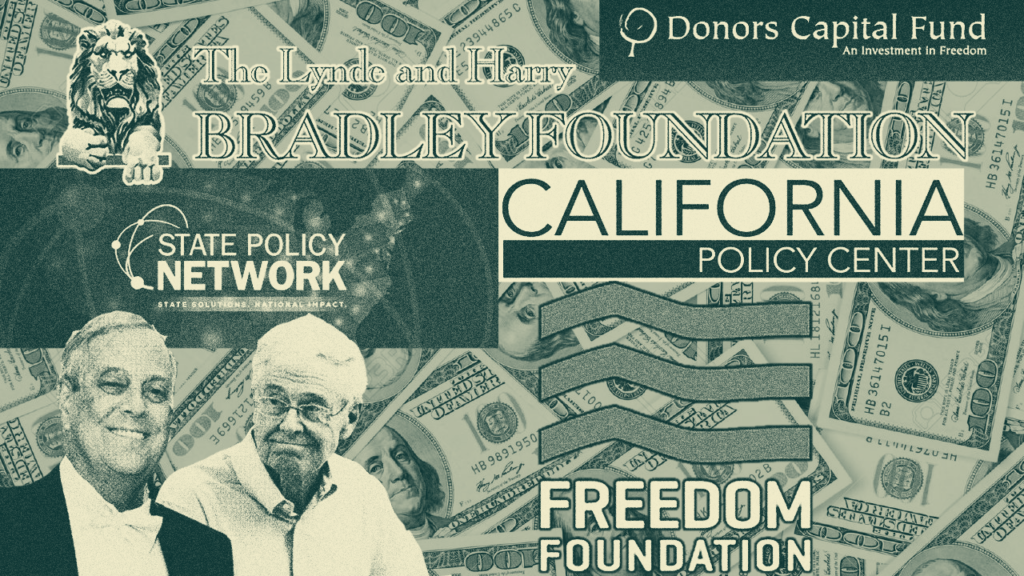 California’s labor movement has helped enact some of the most progressive reforms in the country, including the $15 minimum wage, rights for domestic workers and sanctuary state legislation to protect undocumented residents. It has helped to establish the state as a counterweight to the Trump administration. But the Supreme Court is likely to undercut that power when it rules later this term in Janus v. American Federation of State, County and Municipal Employees Council 31.

“The entire country will become right-to-work with the stroke of pen,” predicted Terence Pell, the president of the Center for Individual Rights at a Heritage Foundation event in Washington DC last August.

Pell, whose organization represented Rebecca Friedrichs against the CTA, exaggerated the impact of a Janus win, but not by much. The decision would affect only public employees, but they comprise the majority of unionized workers in the country. Thirty-four percent of public-sector workers are in unions nationwide, compared to just six percent of those who work for private companies. In California, some 54 percent of public employees hold union cards, while only about nine percent of private-sector workers do, according to unionstats.com.

Millions of public-sector workers would be fair game for anti-union messages from groups on the right, including the Washington state-based Freedom Foundation. “By educating union members about their right to stop paying dues, the Freedom Foundation defunds Big Labor,” a narrator intoned in a videotaped fundraising appeal earlier this year. “That means more money for the workers and less money for liberal politicians.”

Donors Capital Fund and Donors Trust have been conduits for contributors like the Koch brothers to fund attacks on unions.

Cutting unions off at the knees to curtail their political power is the dream project of some of the nation’s biggest right-wing funders and activists, including the Koch brothers, the Lynde and Harry Bradley Foundation ($845 million in assets in 2015) and the State Policy Network (SPN) a consortium of 66 ultra-conservative think tanks with a combined revenue of some $80 million. For years these groups have poured money into anti-union causes in the belief that union-backed Democrats stand in the way of slashing government spending and of privatizing education through more charter schools and school voucher programs.

The SPN director, Tracie Sharp, wrote in a 2016 fundraising letter, “Today, coercive Big Government unions are the biggest sources of funding and political muscle for the Left – but we are also primed right now to deliver the mortal blow to permanently break its stranglehold on our society.” Sharp especially singled out teachers’ unions for her ire.

The Bradley Foundation, whose founder, Harry Bradley, was a member of the John Birch Society, gave out more than $42.5 million in 2015 (the last year for which its tax return is available), including a half-million-dollar grant to the Freedom Foundation. Documents obtained by the Center for Media and Democracy showed that union-busting to defund Democrats has been an aim of Bradley Foundation grant-making for at least 14 years. The documents include notes about many of the foundation’s grants that are similar to one attached to a $100,000 gift to Colorado’s Independence Institute, for “neutralizing the power of Colorado’s teachers’ unions by defunding them at the local school district level.”

Not to be outdone, the Alexandria, Virginia-based Donors Capital Fund, a “donor advised” fund that channels individual contributions to specific causes while allowing contributors—like the Koch brothers and the DeVos family— to remain anonymous, shelled out more than $67 million in 2015. Much of it went to fund an infrastructure of right-wing think tanks and activist groups, including nearly $4 million to the SPN (where Rebecca Friedrichs is now a fellow) and its state affiliates. Donors Capital Fund and its sister fund, Donors Trust, have been conduits for contributors like the Kochs to fund attacks on unions, notably the fight against collective bargaining for public employees in Wisconsin, as Mother Jones reported in 2013.

California groups have yet to attract much of these donors’ largesse, but the opportunity for a big win against labor could change the equation. In Orange County, two SPN affiliates share a Tustin office — the Washington state-based Freedom Foundation and the California Policy Center — and aim to be at the heart of attempts to convince union members to quit paying dues, and to bleed labor treasuries through litigation.

Robert Loewen, a retired corporate attorney with Gibson Dunn, became chairman of the California Policy Center board four years ago because, he said, he wanted to combat the idea that “people on the left were champions of the little guy. They’re actually hurting the little guy, so it was all a big lie.”

Loewen argued that money from public-sector unions drives the liberal narrative. Politicians are in lock step with labor, Loewen claimed, because of the latter’s campaign cash.

But it’s not only politicians who Loewen believes are controlled by organized labor.

“The PTA has been corrupted by the unions,” he said. “Somehow or other, they have to find out they’ve been set free,” Loewen said of the teachers he hopes will be emancipated by Janus.

“Someone has to show them – this is how you leave the union.” That someone would be Loewen and his group.

Loewen’s plans to target education unions may seem cribbed from SPN’s playbook, but he denies SPN is involved with his organization.

“That network has nothing meaningful to do with my operations,” Loewen claimed, adding that he was unaware of its $50,000 donation. “If they would come and dump $10 million in my bank account, I would love that.”

Defender of the Little Guy may be an awkward mantle for Loewen and the California Policy Center leaders to take up, given their wealth and backgrounds. But Loewen said his organization has reached beyond its traditional base – in part to combat what he calls “the left’s narrative” that it stands with working people.

Loewen and his board are longtime backers of Republican causes, and the move comes as Orange County voters increasingly turn to the Democratic Party, partly because of a growing Latino electorate. The California Policy Center is a tax-exempt non-profit, despite its desire to affect political change. So far, no one has suggested that the center has violated its tax-exempt status by engaging in overtly political activity, but the Freedom Foundation has recently been accused of doing so in complaints to the IRS and the attorneys general of Oregon and Washington.

Loewen’s organization backs a parent union led by Santa Ana school board member Cecilia Iglesias, who is also community relations director at the California Policy Center. The group joined Anaheim parents at Palm Lane Elementary in a three-year battle to convert their school to a charter.

Last July the group screened the anti-teachers-union documentary Waiting for “Superman” at a Santa Ana restaurant. Afterward, parent-union activist Celia Robles said she participates because her son’s school hasn’t been responsive to her. She joined a school advisory committee, but felt ignored when she questioned budget figures. She said her son’s teacher brushed off her concerns that he’s not sufficiently challenged in the classroom, saying, “He’s doing well enough.”

In reaching out to the grassroots, the California Policy Center may have borrowed from the approach of its fellow SPN affiliate, the Freedom Foundation, which targets individual union members by visiting them at home.

The foundation began the project three years ago when the Supreme Court ruled, in Harris v. Quinn, that nearly a million workers nationwide who care for the elderly and disabled in their homes couldn’t be forced to pay so-called agency fees for union representation if they chose not to join the union.

Following the court’s decision, the Freedom Foundation launched a campaign modeled on union organizing to strip home-care and in-home child care workers’ unions of their memberships in Washington and Oregon, and this year in Orange County, California.

The foundation sought to obtain lists of workers, and set off to connect with them. The group created cable TV ads and a website, optouttoday.com, that encourages home health aides and child care providers to quit paying dues, and instructs them how to do so. It’s also filed lawsuits against unions and launched a failed effort to establish its own union for child care workers to compete against the Service Employees International Union in Washington.

In Oregon, union membership among home-care workers has fallen by 40 percent.

At SEIU’s Local 925 in Seattle, which represents child care providers, executive vice president Tricia Schroeder agrees. The Freedom Foundation is far from destroying the union in the short term, but her union has had to respond to its attacks, which costs money.

“It’s disheartening as a union leader that that’s the way you spend union dues. I would much rather run stronger contract campaigns and organize.”

That may well be part of the Freedom Foundation’s strategy. When it forces unions to fight back, it drains their resources. Its funders certainly seem persuaded that the Freedom Foundation is hitting its mark. The group reported a million-dollar increase in its total revenue in 2015 — a 50 percent jump from the year before, according to its latest publicly available tax return.

Whether anti-union groups can do as well or better than the Freedom Foundation if Mark Janus wins his case is an open question.

They’d face a very tough sell with teachers, firefighters and police officers, whose unions have achieved middle-class wages, health care and pension plans for their members that are rare outside of the public sector. What’s more, the political muscle that labor has built in California could cause the same right-wing forces that bemoan it to think twice before making a major investment in the state, at least in the immediate aftermath of a pro-Janus decision.

Can Unions — and the American Middle Class — Survive the Supreme Court’s Janus Decision?