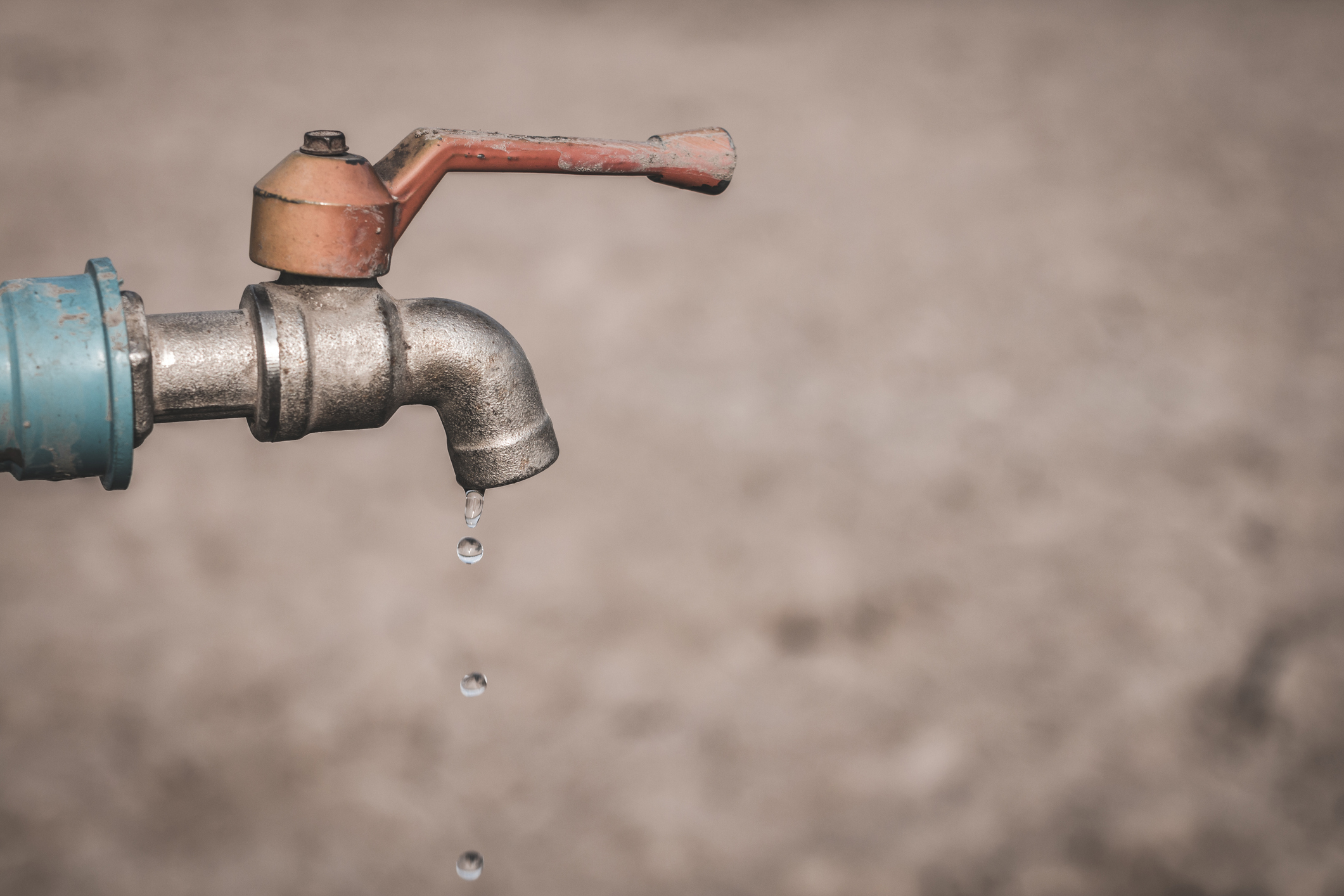 For 35 days between March and April of this year, Dante Woolfolk went without any running water in his house in Brooktrails, a small town nestled amid the leafy canopies of Mendocino County in Northern California. A spiraling unpaid water bill had led the local water system to turn off the spigot.

For those 35 days, says Woolfolk, his life was upended. He purchased water to cook, make coffee and clean the house. He believes he “easily” spent $600 on bottled water alone. The 36-year-old’s three children stayed with a nearby friend. Woolfolk showered there, too. “I’m so grateful for that,” Woolfolk says of his friend’s largesse. But those 35 days without running water were hard, he says.

Woolfolk lost his hotel maintenance job at the start of the pandemic and has been unemployed since. His water bill, he says, was roughly $1,700 in arrears when the tap was shut off. He tried numerous times to make incremental payments on the debt, but the local community services district wouldn’t accept his overtures, he says. Woolfolk’s mother even made a $100 payment, but the water system operators still turned his water off soon thereafter, Woolfolk says.

The Brooktrails Township Community Service District failed to respond to questions. State water board spokesperson Blair Robertson wrote in an email that the agency wouldn’t comment on an “open investigation.”

The issue spilled out at Brooktrails Township board meeting in April when Woolfolk and several community advocates took to the floor to decry the shutoff, and to offer money to cover the debt using funds raised through a GoFundMe campaign. The service district subsequently accepted the money, he says, and water once more flows through the faucets in Woolfolk’s home.

Adjusting for inflation, the average California household paid around 45% more per month for their drinking water in 2015 than they did in 2007.

The state has been working towards such a program for years, but these efforts have been shaped by disagreement over issues like long-term funding sources and which agency should manage it. These differences are exemplified in Gov. Newsom’s May revised budget, which includes $200 million to bolster a federally funded, nationwide low income water assistance program rolled out here in California by a state agency. With that particular pot of money, eligible customers can apply for a one-time remittance to help cover any water-related debt.

“We support the governor’s proposal,” said Cindy Tuck, deputy executive director of the Association of California Water Agencies (ACWA), the largest statewide coalition of public water agencies in the U.S., representing 90% of the water delivered in California.

Advocates for a permanent — as opposed to a one-time — drinking water rate assistance safety net say the state can do better. Such a program, outlined in a bill introduced last year, would offer ongoing relief to struggling households, and potentially the undocumented. If instituted, it would be the first such program in the nation.

A confluence of events have conspired to make drinking water costs a worsening headache for many Californians, and vulnerable low income households in particular.

The average California household paid around 45% more per month for their drinking water in 2015 than they did in 2007 (adjusting for inflation), while the expenses associated with bringing struggling water systems up to code — especially amid a drought worsened by climate change — are expected to raise the cost to households again significantly. An indication of the impact from these rising costs can be seen in a state survey from the end of 2020 that found around $1 billion in water debt affecting 1.6 million California households and 5 million individual residents. In 2019 alone, some 500,000 Californians suffered water shutoffs. Those shutoffs came not only before the pandemic but before the impact of soaring inflation, which has weighed heaviest on California’s poorest.

Without a statewide drinking water rate-payer assistance program, the task of helping debt-riddled customers has largely fallen to local water agencies. A report from early 2020, however, found that only about half of California’s community water system customers are served by a utility that offers a rate-payer assistance program, and less than 20% of the state’s poorest received such a subsidy. Even when a water system does offer assistance, the amount of financial assistance can vary drastically. Further complicating matters, say utility operators, is that they are statutorily precluded from raising rates on wealthier customers to subsidize lower income residents.

Ten years ago, California passed the Human Right to Water Act — a landmark slab of legislation intended to guarantee every Californian clean, accessible and affordable water. That bill has precipitated a slew of actions including a sweeping plan to better manage the state’s vulnerable groundwater resources, and a program to fix failing water systems. Legislation passed in 2015 set the ball rolling towards a statewide water assistance program, one outlined in SB 222, introduced last year by Sen. Bill Dodd.

While that bill works its way through the Legislature, the state water board has given a trial run to a drinking water and wastewater assistance program using nearly $1 billion in funds allocated last year to cover debts accrued during the height of the COVID pandemic.

The water board says it distributed some $301 million through the drinking water portion of the arrearages program. (Brooktrails received nearly $300,000 to cover drinking water debt accrued between March 4 of 2020 and June 15 of last year.) The water board has also issued some $73 million to cover wastewater arrearages. Nearly $60 million went to the Los Angeles City Bureau of Sanitation alone.

A long-term water program funded solely through the federal government would preclude undocumented households, a sticking point for community advocates.

As part of that arrearages program, utilities were required to apply to the water board on behalf of their customers — in contrast to the federal Low Income Household Water Assistance Program (LIHWAP), for which the public can apply directly once their water or wastewater utility has enrolled in the program. That fund, managed by the California Department of Community Services and Development (CSD), offers low income households a one-time credit of up to $2,000 on their water or wastewater bill from a federal allocation to the state of $116 million. Newsom’s revised budget feeds the program another $200 million.

“Part of it is getting low income households to apply, and CSD is really set up for that work,” says Tuck. “CSD’s work with local service providers streamlines the eligibility verification process.”

But a program funded solely through the federal government would preclude undocumented households, a sticking point for community advocates, some of whom argue that the state water board, rather than CSD, would be better placed to manage the program, at least in some ways.

“The [long-term] bill assistance program would take some percentage or portion of your bill and pay it so that you would have a lower water bill on an ongoing basis,” says Jennifer Clary, California director of Clean Water Action, an environmental advocacy organization. And because the water board already has existing billing and regulatory relationships with individual water systems, that agency “has to be involved” in any drinking water assistance program, she adds.

Such a program should also be mandatory, says Clary, pointing to the state water board’s voluntary arrearages program, which failed to encompass all struggling households in the state. The water board says that small utilities had the lowest participation rate in the program, with systems of less than 500 connections participating at a rate of 55%, and systems with over 10,000 connections participating at a 91% rate.

Of the nearly $1 billion earmarked for the two arrearages programs handled by the state water board this past year, there remains nearly $550 million unspent. The question now is what to do with that money.

That said, the water board has helped over half a million households, wrote agency spokesperson Robertson, “and demonstrated a need for customer assistance programs in the water and wastewater utility sectors.”

Claiborne also raises concerns about the federal water crisis assistance fund’s potentially “limited reach.” He compares it to another national energy assistance program run by CSD that in recent years met the needs of only about 20% of eligible customers.

Of the nearly $1 billion earmarked for the two arrearages programs handled by the state water board this past year, there remains nearly $550 million unspent. The question now is what to do with that money. Claiborne said that state officials have suggested it could be used in part to pay for the $200 million Newsom has budgeted towards the national LIHWAP crisis fund. If that’s the case, then those monies wouldn’t be available for undocumented households in California, Claiborne says. State appropriation is needed to ensure California’s undocumented can access that help, he adds.

Despite the funding omission in the governor’s May revised budget for a long-term water assistance program in California, proponents of such a program appear encouraged that the final budget will reflect that end goal. Upon publicly releasing his revised budget, Newsom specifically mentioned Sen. Dodd’s legislative efforts in this arena. Dodd could not be reached for comment.

The Senate Committee on Budget and Fiscal Review also issued its own proposed budget which includes $330 million to fund the first two years of a statewide program as outlined in SB 222.

”We view that there is a viable path this year,” says Uriel Saldivar, a senior policy advocate with the Community Water Center, a grassroots environmental nonprofit, who added that his organization would be involved in a rally and press conference in Sacramento on May 31 around this issue.

“We would like to see a harmonization between the governor’s proposal, the senate’s proposal and the assembly to include this, since we do feel all the makings of a historic moment are in line right now.”

Would ACWA, a powerful political actor in Sacramento, support that harmonization? The answer once again boils down to funding, Tuck says. “A long-term low income rate assistance program will need a long-term funding source.”