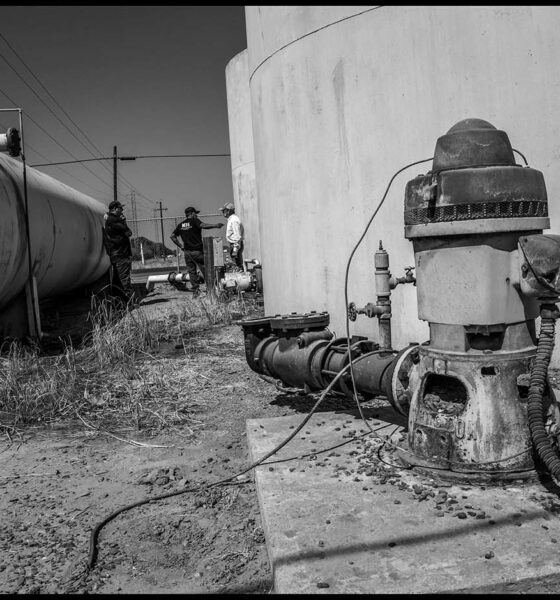 The clock is ticking as the state’s most vulnerable water users face a tough reckoning.

The pumping station for the Las Deltas drinking water system in Las Deltas, California. All photos by David Bacon.

Amid the vast water wars of the drought-parched Central Valley, the tiny community of Las Deltas in Fresno County is enduring its own largely hidden battle over California’s liquid gold.

In many ways, Las Deltas projects a sense of time standing still — a feeling fostered by the decaying wooden skeletons of long abandoned buildings lining the roadside in an area with some of the highest levels of poverty in the nation. But the historical threads of the region aren’t just visible above ground. An abandoned store and bar in the Las Deltas community. Photo: David Bacon.

The old asbestos pipes of Las Deltas’ water distribution system, which serves fewer than 100 homes and businesses with water piped from the nearby town of Firebaugh, is crumbling beneath the residents’ feet. A small band of locals started and ran the Las Deltas Mutual Water Company for decades. They disbanded it a couple of years ago, however, overwhelmed by the bureaucracy of running the disintegrating system and worried about potential lawsuits over its much-needed upgrades. Right now, no one is formally at the helm. When a pipe bursts, as it frequently does, a plumber is called from nearby Firebaugh to patch it up — a temporary fix in lieu of a long-term solution.

The price tag for upgrading the distribution system was estimated at some $4.8 million. It’s still unclear where the money will come from. But the average resident — some of them low income farm workers — can’t afford it, as they already pay $100 a month for their water, close to double the state average.

A massive funding gap means that some of California’s most broken small water systems, like that in Las Deltas, will face a yawning wait for desperately needed economic assistance.

“There’s a lot of poverty here,” says Tim Ward, a spry and wiry 72-year-old with a snow-white handlebar mustache, who has lived in Las Deltas all his life. As the former president of Las Deltas Mutual Water Company, Ward helped maintain the system for years, going out day or night to plug leaks. He believes an issue as crucial as clean, affordable water should prompt the county or state to help. On a recent tour of the community, he sums up his take: “They don’t care about us.”

Nearly 10 years ago, California enacted the Human Right to Water Act to help beleaguered communities like Las Deltas. This landmark legislation obligates the state to work towards safe, clean, affordable and accessible drinking water to the 1 million residents without it. Since then, there have been several key developments designed to bring this law to life, including a funding program to help failing systems get up to code. In his latest budget, Governor Newsom included nearly $1 billion to help users pay off a mammoth debt in unpaid water bills.

As the state moves toward its statutory goal, however, hundreds of small drinking water system operators and their mostly low income users face a tough reckoning. The reasons why include years of deferred infrastructure improvements, dwindling groundwater tables, tightening environmental standards and a dearth of trained talent within their ranks to oversee the work that desperately needs to happen. 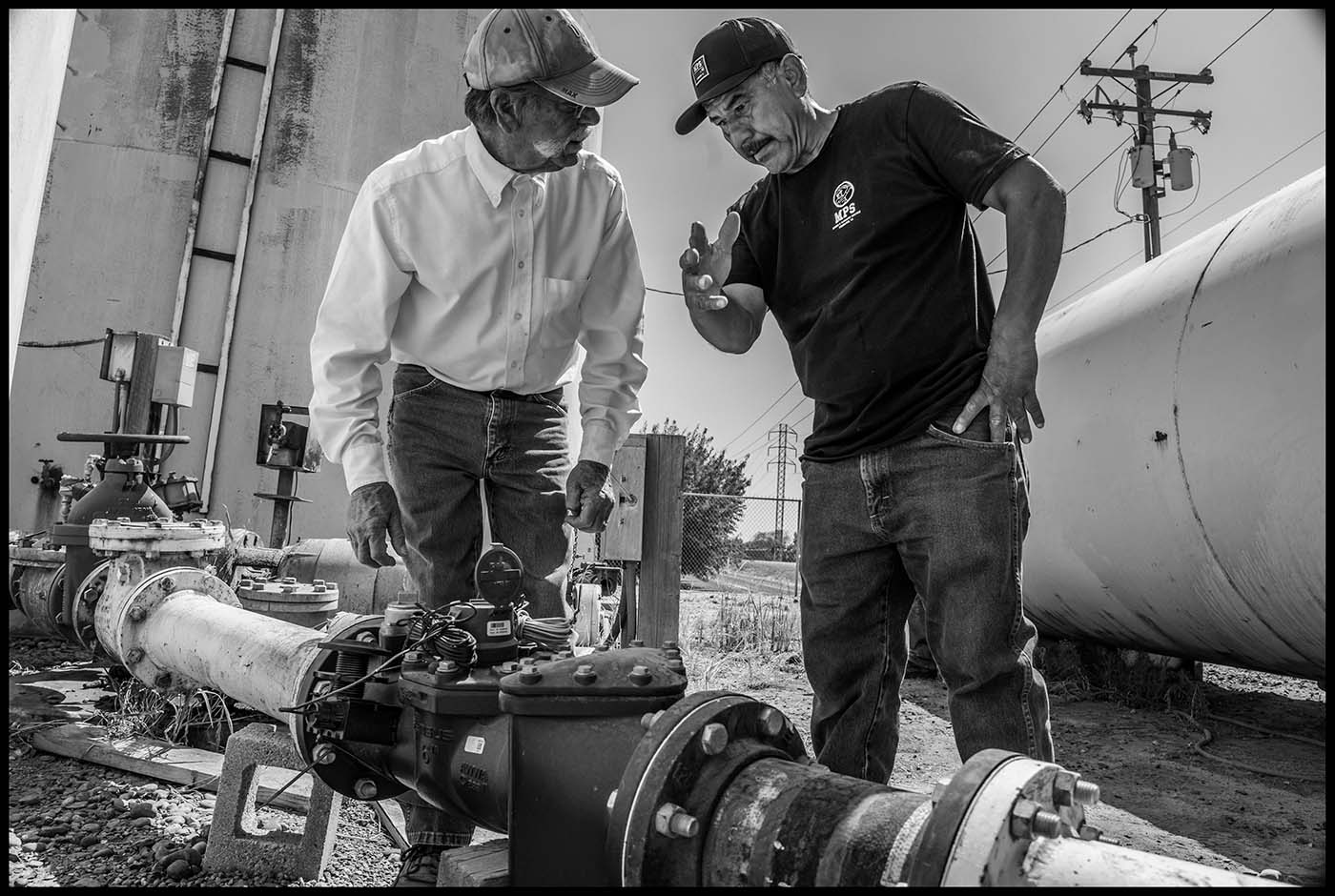 Tim Ward, left, discusses a leak at the pumping station with Miguel Magallanes, a plumber from the nearby city of Firebaugh.

Perhaps most crucially, a massive funding gap means that some of the state’s most broken small water systems, like that in Las Deltas, will face a yawning wait for desperately needed economic assistance.

“It’s a bit like Ginger Rogers and Fred Astaire,” says Jennifer Clary, California director of Clean Water Action, an environmental advocacy organization, comparing the lopsided challenges between larger and smaller systems. “Ginger Rogers had to do everything that Fred Astaire did, but backwards and in high heels.”

In April, the state released its first ever needs assessment, and the eagerly awaited 332-page report provides a stark overview of the challenges ahead.

Of the 2,779 small water systems investigated — including those with 3,300 or fewer service connections, and systems serving K-12 schools — the state labeled 326 as “highest priority” for being out of compliance or consistently failing to meet mandatory drinking water standards.

That list is growing, the report states, not shrinking.

While the projected costs over five years to bring just the most at-risk small water systems in California up to speed is $10.3 billion, the available financial assistance is short by some $4.7 billion.

When it comes to affordable drinking water, approximately one-third of small water systems serving vulnerable communities exceeded at least one of three key affordability thresholds: share of household income going towards water payments, extreme water bills and shut-offs through nonpayment. A recent state water board survey drew an even starker picture. The survey found at least 12% of households have water debt totalling some $600 million-$700 million, with low-income communities of color disproportionately impacted.

In his latest budget, Gov. Newsom earmarked nearly $1 billion to wipe out drinking and wastewater debt accrued between March 4, 2020, and June 15, 2021. But community members and advocacy organizations raise fears about the program’s purported benefits, especially awareness among the public and of participation among operators. “We are concerned that some water systems are choosing not to participate even as their customers drown in debts from the pandemic and risk losing access to drinking water,” wrote Kyle Jones, policy director for Community Water Center, in a press release Wednesday.

In an email to Capital and Main, Robert Brownwood, an assistant deputy director at the water board, wrote, “This is a real concern for the Board who is aggressively working with numerous entities to get the word out to all community water systems.”

Questions of short-term debt relief invariably lead to a much more intractable problem: What happens when these monies dry out and the debt starts to mount again? And rise it will, for the art of divining clean and accessible drinking water in California doesn’t come cheap, which, for its part, the state realizes.

A key aim of the needs assessment is to help regulators identify where to prioritize a sizable pot of state money for water infrastructure projects. This includes the Safe and Affordable Funding for Equity and Resilience (SAFER) program, launched in 2019 to provide a funding mechanism for disadvantaged communities. Indeed, the town of Firebaugh is in the process of applying for an estimated $2.5 million grant through this program to replace the damaged storage tank used to supply water to Las Deltas. 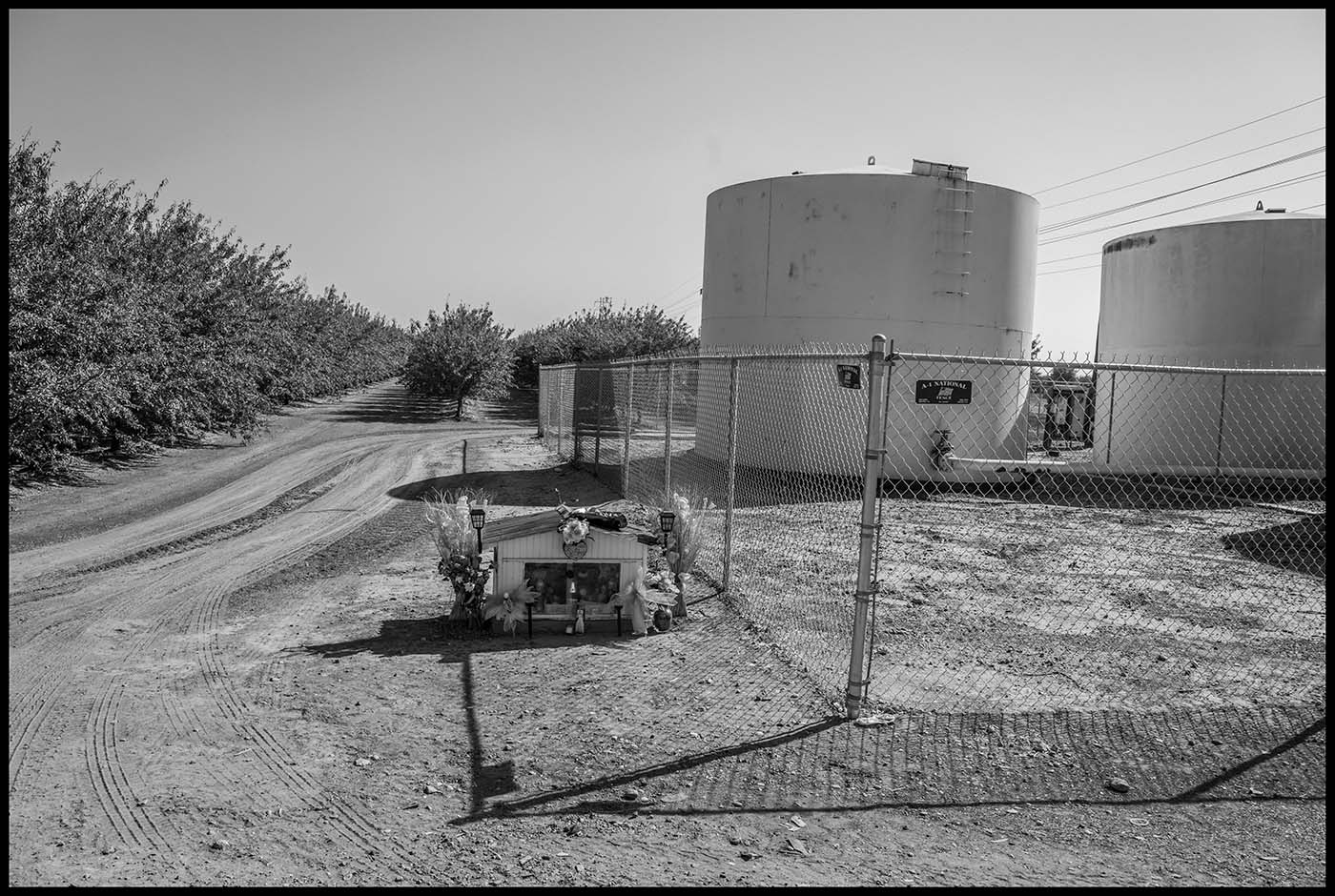 A memorial for a car crash victim next to the pumping station of the Las Deltas drinking water system.

But while the projected costs over five years to bring just the most at-risk small water systems in California up to speed is some $10.3 billion, the available financial assistance — including from SAFER — is short by some $4.7 billion.

“Where does that money come from? That’s a huge question,” says Sue Ruiz, a community development specialist with Self-Help Enterprises, a non-profit that provides low-income communities with tools for self-sustainment. Ruiz has been helping Las Deltas for several years, and she’s concerned that much needed funds to both improve the community’s water distribution system and to properly consolidate the system with that of Firebaugh could take years to materialize.

There are other potential funding sources, especially for systems impacted by groundwater contamination. Under the polluter-pays principle, companies that damage the environment are supposed to pay penalties and the price tag for cleanups. But California has long been maligned for weak regulatory enforcement, while efforts at cost recovery have been checkered, with critics blaming in large part a state leadership vacuum.

Large water system customers aren’t immune to high bills. Indeed, there can be much variety in rates within cities served by multiple water systems large and small. But drinking water experts also point out that larger systems can have significant advantages over their smaller cousins in their efforts to keep costs down, like economies of scale, access to a wider variety of water sources in the event of a contamination problem, and funds to subsidize their most vulnerable customers.

The East Bay Municipal Utility District is one of the state’s larger water utilities, with some 393,000 individual connections and 1.4 million customers. Their average household water bill is slightly higher than the state average, but eligible customers who use no more than 1,050 gallons per person a month can get up to a 50% credit on their bimonthly bill.

Less than 20% of the state’s poorest residents currently receive benefits from a low-income water subsidy. Even when utilities do provide assistance, it can vary drastically.

Because the state doesn’t provide any long-term rate-payer water assistance program, this Oakland-based utility — nicknamed East Bay MUD — has to provide the funds itself, which it’s statutorily obliged to do without raising the rates on its customers. So it leases out its land to companies like AT&T and Verizon to erect cell towers. But less than one-third of potentially eligible East Bay families are enrolled in its Customer Assistance Program, which is why it’s planning a major outreach effort to raise awareness. Still, East Bay MUD is doing better than most of the rest of the utilities in California.

Only about half of the state’s community water system users are served by a utility which offers some form of rate assistance. Less than 20% of the state’s poorest residents currently receive benefits from a low-income water subsidy. Even when utilities do provide assistance, it can vary drastically.

Liberty Utilities, for example, which supplies drinking water to various communities across the U.S., offers eligible customers in California a discount on their water bill, capped at $7.40 per month, as well as potential savings through a water conservation program. Cracked earth in a dry irrigation canal in Las Deltas.

In 2015, legislation passed directing the state water board to submit recommendations for a statewide low-income water rate assistance program. A bill introduced earlier this year to make the program a reality has been shelved until the next legislative session, largely because there is no stable funding source for it yet.

As many wait for that bill to sink or swim, East Bay MUD is pioneering a relatively novel program — one used in Australia’s Yarra Valley for some 20 years — to restrict the water flow to households with long delinquent accounts in lieu of turning the faucet off altogether. The ultimate aim, says East Bay MUD officials, is to funnel delinquent households towards more long-term financial assistance. This program could arrive at a crucial time.

The state water board warns that monthly household water rates — which grew around 45% between 2007 and 2015 — will likely continue to rise “significantly in the years ahead.” Professor Gregory Pierce, director of the UCLA Luskin Center’s Human Right to Water Solutions Lab, has worked on various state drinking water reports. He says such a hike in household water rates is inevitable if California wants a sustainable fix to its drinking water problems.

“Water has historically been underpriced, and it needs to rise,” he says, pointing to the associated costs of tackling major existing and emerging drinking water contaminants.

The question then gets back to where these costs will fall. While legislators, policy makers and community advocates grapple with the answer, the residents of Las Deltas have more immediate headaches. 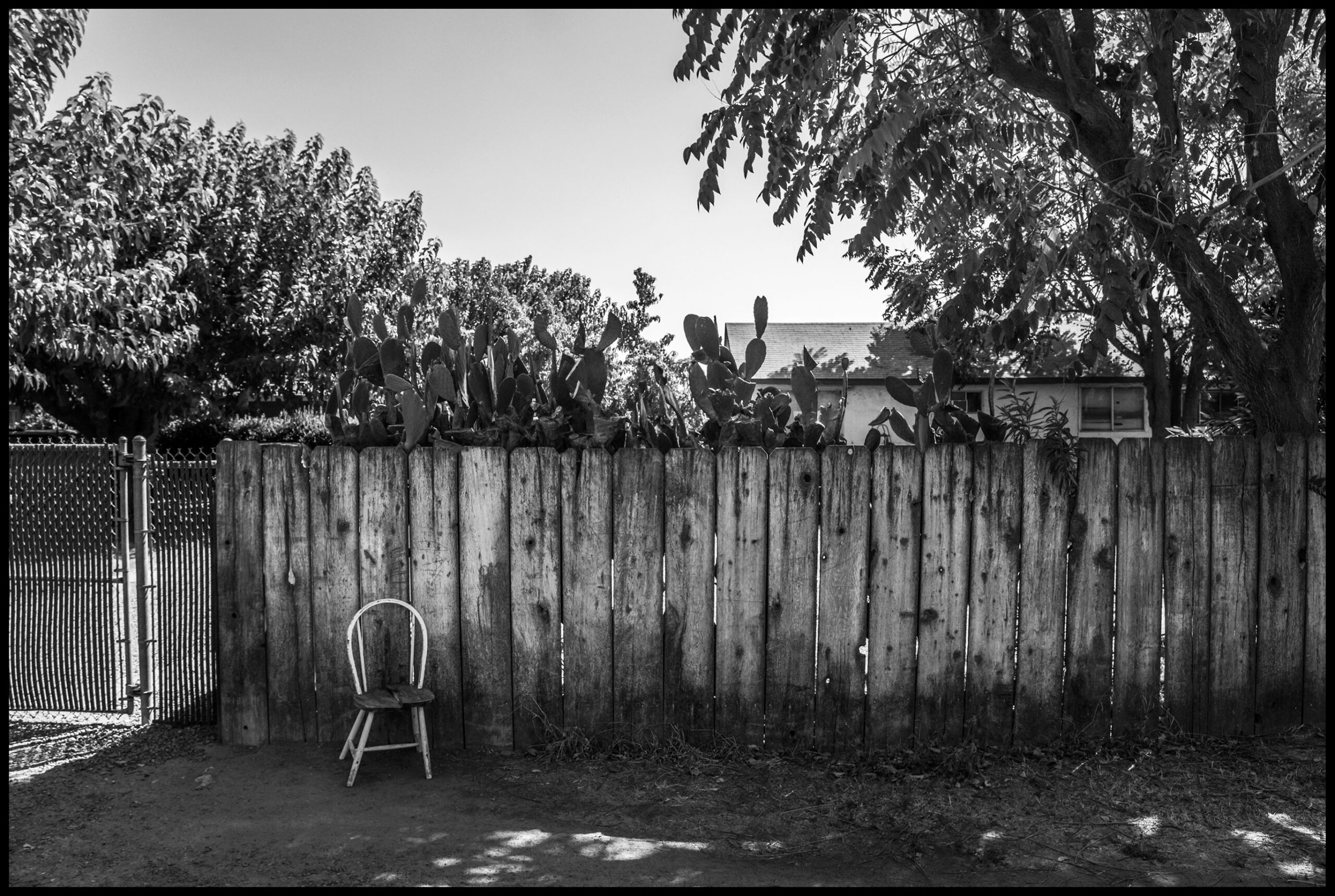 A home in the Las Deltas community. Photo: David Bacon.

Still, Sue Ruiz is quietly optimistic. She says she understands Tim Ward’s frustration with the lack of government assistance. But this month, she plans to hold a community meeting to inform the residents of the work she’s doing with the state to secure vital funds to finally fix the system. The water board is also in the process of establishing an administrator to potentially step into the breach and operate the system.

“People are getting discouraged, rightfully so,” Ruiz adds. “But they’re not forgotten.”