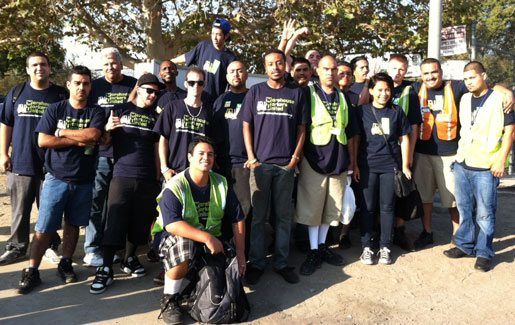 Workers at a Southern California warehouse that moves Walmart merchandise returned to work after a 15-day strike that included a six-day, 50-mile pilgrimage for safe jobs.

By midnight Friday morning, workers from all three shifts at the 24-hour facility returned to work after winning safety improvements on the job and drawing a response from Walmart about poor working conditions in its contracted warehouses.

“We no longer feel like we are working in the shadows,” said Carlos Martinez, a warehouse worker who went on strike and participated in the 50-mile WalMarch from the warehouses in the Inland Empire to Downtown Los Angeles. “We’ve never had this much attention on our working conditions and I have never felt this much support. I feel ecstatic going back to work and proud that we have all stood together as a team.”

Though Walmart initially dismissed workers concerns about conditions on the job as “unfounded,” by the end of the six-day march, Walmart spokesperson Dan Fogelman told the Huffington Post it “‘is developing a protocol of random inspections by third-party organizations and “conducting contract reviews with our service providers with an eye towards implementing specific health and safety requirements.’”

During the course of the two-week action the workers, who are temporary workers without the protection of a union, gained national attention. More than 120,000 supporters joined warehouse workers in calling on Walmart to meet with warehouse workers to hear firsthand about their experiences inside the warehouse.

After many appeals to Walmart and its contractors to end retaliation and fix poor working conditions including filing a detailed complaint with the California Division of Occupational Safety and Health, a group of warehouse workers went on strike Sept. 12 to protest unfair labor practices they have faced on the job and call for an end to retaliation and unfair labor practices committed by their employers, NFI and Warestaff.

Workers and their supporters are calling on Walmart to take responsibility for working conditions in the Inland Empire warehouses it relies on. As the largest retailer in the world, Walmart effectively dictates the standards of operation in the logistics and distribution industry, which impacts the lives of 85,000 warehouse workers in Southern California who every day unload merchandise from shipping containers that enter through the ports of Los Angeles and Long Beach and load it onto trucks destined for retail stores like Walmart.

Related Topics:Warehouse Workers United
Up Next