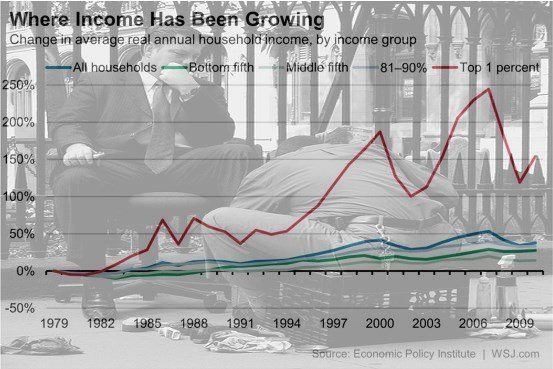 Americans don’t like inequality. We like to think of ourselves as a middle-class country where the top is not out of reach and the bottom doesn’t pose such a grim, cautionary specter that people fear for their livelihoods. We like to think that’s what makes us different from other societies. Or at least that’s the way it used to be.

CNN journalist John Blake, who grew up in Baltimore, remembers it this way: “Black men had good blue-collar jobs…Kids played baseball and basketball and every known sport at public fields and courts. We had summer jobs and internships.” Today, he says, “the factories and playing fields are locked behind gates or overgrown with weeds.”

Somehow the value of a stable, vital middle class has slipped from America’s vision for itself.

That shift characterizes America far beyond Baltimore. It describes the inequality that has replaced the solid middle class.

Most of us have heard that a few very rich families own more than what the 90 percent of the rest of us do. (That’s a global trend: According to a study by Oxfam, 62 people own as much as half the world’s population.) Now recent  numbers show incomes for the poorest sliding even after the economic recovery. According to the Brookings Institution average incomes have slipped — despite strong job growth two years in a row. We have failed “to pull millions of Americans back up the economic ladder.” We’re talking about 12 million food service workers making a median wage of $9.20 an hour, or an estimated 64 million workers earning less than $15 an hour.

Many of us may have also heard that In Europe the average pay differential between top executives and the median wage of their employees is 16 to 1. That is close to what it once was in the U.S. – where today it’s grown to at least 200 to 1 in publicly traded corporations. (At a company like Chipotle, it’s 1,522 to 1.)

This fundamental inequality parallels other disparities throughout the economy. In 2012 the 400 highest earning taxpayers paid less than 17 percent in federal taxes on average incomes of $336 million. That’s just slightly more than those households who made only $100,000. Similarly over the last year Internet companies grossed about $300 billion, but a mere five of them took 70 percent of it.

No wonder the middle class in this country feels anxious. The disparity between the few haves and the mostly have-nots is pervasive. Falling through the economic floorboards was never more likely, and white working-class Americans are feeling the pain. Economist Paul Krugman calls it “existential despair.” The mortality rate for these workers rose half a percentage point each year between 1999 and 2013. That’s half a million additional lives lost to “suicide, alcohol and drug poisonings,” according to a piece in the Atlantic.

Of course it doesn’t need to be that way. As I said, Americans don’t like inequality – but what can they do about it? The public policies set by Congress and state legislatures have skewed the rules to help the fewest and hurt the most:

Somehow over the last few decades the value of a stable, vital middle class has slipped from America’s vision for itself. It’s gone from the world’s to-do list also. Pope Francis called us back to it in his encyclical on human-caused climate change. He argued that care for the poor and care for the Earth go hand in hand. Surely we can do one and the other at the same time. The pope would say, “We must.”