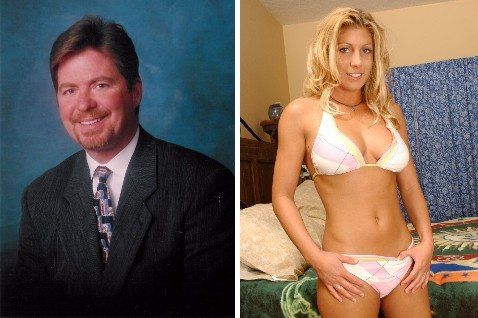 Most of us – at least the 87 percent or so of us not protected by collective bargaining agreements – have to worry about job security. With only a few exceptions, all of us can be fired for any reason – or for no reason at all.

Two California news “scandals” brought this into sharp relief this week, as a couple of public employees found themselves under fire for some extracurricular activities.

Let’s start with the question of job performance. One might argue that once students find out about Halas’ on-camera performance, it will undermine her classroom performance. Then again, one might also argue that same thing about David, he of After Dentist fame (assuming that in 20 years, David becomes a teacher and his students find the famous video).

The real questions in Halas’ case are legal: Is there a ban on teacher moonlighting? And Is there any sort of “morals clause” that teachers have to abide by? After all, the Oxnard School District superintendent was quoted as saying “maybe it’s not a crime as far as the penal code is concerned, but we feel it’s a crime as far as moral turpitude is concerned.” (My wife’s response to this was probably the most sensible possible: “Heh-heh. He said ‘penal.’”)

In short, the answers are no and no: there is no ban on moonlighting, and there is no moral turpitude rule. And at this week’s school board meeting, parents were apparently so concerned about all this that they stayed away in droves. Perhaps they realized that the school district has bigger problems—like the fact that teachers have to have a second job.

Richards’ case is different in two ways. First, he is not just a public servant, but a public official, appointed to his political position first by former Governor Schwarzenegger and then by Governor Brown. Second, there is a direct connection between Richards’ actions and his job, which is to uphold state laws. His charge is to enforce the will of the people, twice voiced, that hunting mountain lions is wrong.

Imagine an official in charge of alcohol control of a dry County leaving the County to go get drunk: it would undermine faith in his ability to do his job. It might even undermine faith that he believes that his job is the right thing to do! It is telling that Richards not only hunted, but proudly sent to the press a picture of himself holding his quarry, and saying “I’m glad it’s legal in Idaho.”

Verdict: Legal argument for dismissal fails; practical argument is strong; political argument is wide open. It’s Jerry Brown’s decision, but Richards does seem to have undermined his own role. Brown should find someone for this position who actually believes in it.

Who Will Care for Our Caregivers?