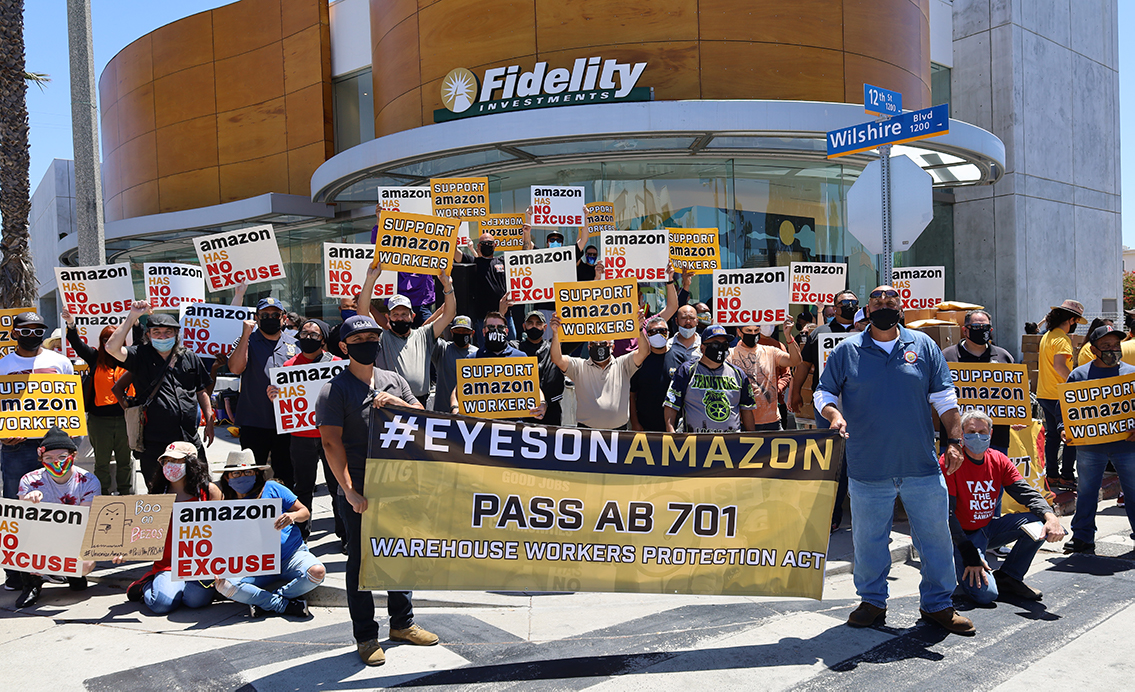 Amazon workers and their supporters rally in front of Fidelity Investments in Santa Monica, California, on May 24. Fidelity is one on Amazon’s largest shareholders. All photos by Christian Castro.

Amazon founder and Richest Man in the World Jeff Bezos got shot into space on his very own rocket on July 20, two weeks after retiring and handing off the company to a successor, Andy Jassy, who previously ran Amazon web services.

The spectacle received breathless media coverage. “I want to thank every Amazon employee and every Amazon customer, ’cause you guys paid for all this. Thank you from the bottom of my heart very much,” an ebullient Bezos told the cameras upon his return.

He was right to thank the employees — because here on planet Earth, Amazon workers are paying for it bigtime, performing the invisible heroics of moving the goods that land upon doorsteps around the world.

The workers do so at their own peril: The Washington Post analyzed OSHA data and reported in June that the injury rate in Amazon warehouses is nearly twice that of warehouses run by other companies.

Warehouse conditions don’t make as splashy an Amazon story as a space flight, but the reports are out there about the relentless work that lead to injuries and an employee turnover rate of 100% within a year, according to the National Employment Law Project 2020 data brief “Amazon’s Disposable Workers.” A New York Times investigation published in June put the turnover at 150% a year.

Yesenia Barrera saw both injuries and turnover when she worked from August 2018 to January 2019 at a 50,000 square foot building employing some 5,000 workers in Rialto, in Southern California’s Inland Empire.

She describes a system in which productivity numbers are constantly monitored but workers aren’t informed of the very exacting quotas that they must meet to avoid a write-up or termination. The badge that employees wear to enter the building clocks them in and tracks the numbers of tasks completed in a given amount of time throughout the workday.

“With the monitoring systems that Amazon uses, people are going to be terminated left and right — it could be your attendance, it could be that the algorithm says you’re not productive enough for the day, or fast enough for the day,” she says. The algorithms decide how many items workers must pick or pack into a box on a conveyor belt in a given amount of time, setting the metrics for each task, performed by different departments. Tasks are assigned specific durations, many in the span of 11 or 15 seconds, according to Barrera.

Not keeping up can result in a writeup or termination for too much “time off task.”

“Say you have to use the restroom,” Barrera says. “The walk to the nearest restroom is going to be five to seven minutes away because the restrooms are not close.” A seven-minute walk plus a 10-minute visit to the restroom puts a worker 17 minutes behind. A five-minute walk back — clocked by the monitoring system — puts a worker “off task” for 22 minutes. All additional trips are noted during the 10-hour shifts.

“All that gets accumulated, and the manager in your department determines whether you get a write-up or terminated — because the algorithm keeps track of that,” Barrera says.

Barrera herself was injured when scanning boxes to assure they were headed to the right destination. The scanner got stuck on the conveyor belt, and when she wrenched it out, it struck her eye. The manager came by and called for a replacement on her walkie-talkie. Barrera says she went to the warehouse clinic and was advised to put a wet paper towel on her eye. She was back at work in minutes.

California Assembly Bill 701 would require all warehouse employers to provide workers with a written description of expected quotas, the number of tasks to be performed within a given time and potential adverse employment action.

Unrelated to the injury, she says she was terminated without even knowing it until she showed up for a shift and her badge didn’t admit her. Her termination was due to “time off task.” “Their algorithm didn’t think I was being productive enough,” Barrera says.

Labor and community allies are focused on long-term strategies that push on a variety of pressure points to hold Amazon accountable for the burnout business practices and to call for protections for workers.

In California, labor advocates are supporting Assembly Bill 701, which would require all warehouse employers to provide workers with a written description of expected quotas, the number of tasks to be performed within a given time and potential adverse employment action. In other words, the employer has to share the metrics and the penalties for not meeting them.

“It goes beyond that,” says the bill’s author, Assemblywoman Lorena Gonzalez (D-San Diego). “You can’t be retaliated against for using the restroom or washing your hands or getting a drink of water.” Algorithms or not, “You can’t be punished for abiding by health and safety regulations,” Gonzalez adds.

The bill is set for a hearing in the Senate Appropriations Committee in August.

Should it pass in California, could the legislation have a ripple effect elsewhere?

Bob Mulholland, a Democratic Party strategist who has worked in California politics for over 40 years, says California’s economy and population size give it influence on environmental, manufacturing and work standards in other states. “If you pass a law in California that requires Amazon and others to have worker information rules and that can withstand court, yes, that will eventually be adopted in other states — and it starts with states like Maryland, New York, Connecticut, Massachusetts.”

With consumer dependence on Amazon growing during the pandemic and a longer term shift of buying habits, Amazon may look impervious to pressure from worker rights advocates. An attempt to organize a warehouse in Bessemer, Alabama, by the Retail, Wholesale and Department Store Union in April failed after intensive tactics by Amazon — texts to the workers, fliers posted in bathrooms urging a “no” vote and a “do it without dues” website.

Since the Bessemer loss, the International Brotherhood of Teamsters has voted to make organizing Amazon workers, both delivery personnel and warehouse workers, a priority. The head of the new Teamsters Amazon division, Randy Korgan, advocates street actions and warehouse strikes to pressure the company.

The Amazon business model presents particular challenges to unionization and reform — one part of the company subsidizes the other.

“The thing you have to remember about Amazon is that it’s really two companies these days,” says Sanford Jacoby, Distinguished Research Professor at the UCLA Anderson School of Management, whose latest book is Labor in the Age of Finance: Pensions, Politics, and Corporations from Deindustrialization to Dodd-Frank.

“There’s the Amazon we know as consumers and then there’s Amazon Web Services, which is a much more profitable part of the company.”

The Amazon business model presents particular challenges to unionization and reform — one part of the company subsidizes the other.

AWS sells data storage and processing to companies, governments and schools — services that save businesses the trouble of managing their own information technology. The division generated $13.5 billion in 2020. “If you split Amazon up into two companies, one being buying stuff online and having it delivered to you instantly, and the other being the part that sells web services to businesses — that’s the more profitable part of the business.

“And it’s actually some of that money that Amazon uses to keep their prices below what other retailers are charging,” said Jacoby, subsidizing the low prices and the promise of a quick delivery that put pressure on the warehouse operations and the workers there.

Jacoby compares Amazon to the Uber business model — with a high turnover rate of drivers also managed by algorithms. “The money that they were getting from investors to develop these sophisticated ways of controlling their workers, the fact that Uber has so many drivers that are quitting, is partly a reflection of the fact that it wants to saturate the market so that people waiting for the car don’t have to wait so long. Similar to Amazon — you don’t have to wait very long for your package. That’s all technologically based.”

Labor-community actions across the nation took place in May, to coincide with the Amazon shareholders meeting set for May 26 and aimed at some of Amazon’s top institutional investors: BlackRock, State Street Corporation and Fidelity Investments. (Bezos owns the largest number of Amazon shares.) Activists turned out at State Street Corporation and Fidelity Investments in Boston and at BlackRock in New York; there were also actions in Philadelphia and Washington, D.C. The national coalition Athena has been pressuring Amazon stockholders not only on labor issues — one measure up for vote would have put a worker on the board — but other practices that impact local communities negatively.

In the Los Angeles area, a small, loud crowd of labor activists, mobilized by the Los Angeles County Federation of Labor, showed up in front of the Fidelity Investment Center in Santa Monica on May 24, two days before the shareholders meeting. “We have a message today to give to Fidelity Investments — Fidelity is a large investor in Amazon,” the rally emcee told the gathering. Warehouse workers are suffering from brutal quotas and terrible injuries, she said.

“As a shareholder they have power.”

The rally leader was Yesenia Barrera, the Inland Empire Amazon warehouse worker fired without explanation. She is now an organizer with the nonprofit Warehouse Workers Resource Center.

In surveying available strategies to change work practices at Amazon, Jacoby notes that shareholder pressure can potentially be effective.

“Targeting Fidelity, for example, which happens to be a privately owned company, is an old tactic of putting pressure on the large institutional investors who hold a lot of Amazon stock to essentially, say, ‘Listen, we’re going to make you look bad in the eyes of the people who do business with you,’” by linking them to warehouse deaths and injuries, oppressive working conditions and micromanagement. “And potentially, who knows, that might hurt your reputation.

“That’s a little bit how the game is played. It doesn’t always work,” he adds.

Sarah Zoen is senior adviser to the private sector for OxFam USA. The international humanitarian organization has a fund to buy shares in companies “so we can use our shareholder voice” for advocacy, Zoen says. OxFam introduced the resolution to put an hourly Amazon worker on the Amazon corporate board, specifically a worker from the Bessemer warehouse.

It won 26.4% of the independent vote from shareholders outside the company.

Zoen says the vote signifies that shareholders got a message — customers are paying attention to working conditions. The proposals are nonbinding, but the vote shows “there’s leverage there.”

“I’ve been to those shareholder meetings where people have stood up as shareholders and talked directly to Jeff Bezos. [Amazon is] very customer-centric. It is all about the customer.”

Organizer and former Amazon warehouse worker Barrera does think the strategy, along with others, makes a difference.

“Issues that are going on inside the warehouse need some light shed on them. That way we can get ourselves protected,” she says. “It starts with the workers. It starts with us pushing things forward.”