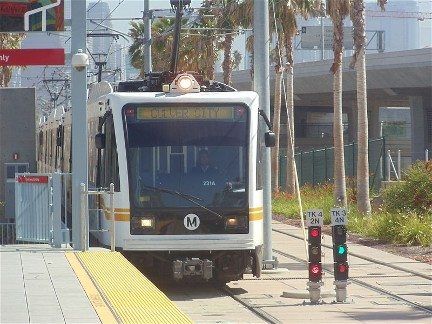 Even as transit agencies around the U.S. are cutting back on bus and rail service and raising fares, L.A. has embarked on this country’s most ambitious transit expansion — from 118 miles and 103 stations to 236 miles and 200 stations, a work program likely to generate an estimated 400,000 construction jobs.

“You have this archetype of L.A. as the highway city of America. Really, in fact, the voters are saying we’re looking to invest in a mode outside of driving . . .  All of a sudden you have this really big powerful place that’s not just changing mind-sets about who they are but has the potential to dramatically remake the way you get around it. It’s a huge opportunity . . . It is going to definitely be felt and watched across the country.”

As they say, “success has many fathers,” and the key players responsible for this re-invention of Los Angeles are too numerous to mention here. One of them, however, is the business-labor-environmental coalition that is responsible for getting Measure R on the ballot and that helped ensure its passage. Move LA’s Denny Zane has led that coalition. At their annual awards ceremony, Move LA is honoring some of its members as well as a number of elected officials who have been key players in the move towards rail expansion. The ceremony will be at Union Station on Wednesday, June 13.

The event, in the stunning Fred Harvey room, will honor the three L.A. County Supervisors — Gloria Molina, Mark Ridley-Thomas and Zev Yaroslavsky. Together with City of Duarte Mayor John Fasana, the three supervisors guided Measure R implementation on the L.A. Metro board. Also honored will be Darrell Clarke, who created Friends 4 Expo in early 2000, at a moment when the future of transit looked especially bleak; Stantec engineer Art Hadnett, who’s engaged the 5,000 members of the American Council of Engineering Companies in support of America Fast Forward, the federal version of Mayor Villaraigosa’s “30-10” plan to build out 12 Measure R-funded rail lines in 10 years; and retired State Senator Kevin Murray, who laid the groundwork for Measure R in 2003 with legislation to authorize a transportation sales tax in L.A. County.

Move LA is also honoring Robbie Hunter, executive secretary of the L.A./Orange Counties Building and Construction Trades Council, who helped develop both Measure R and the campaign to pass it, and then negotiated a Project Labor Agreement and Construction Careers Policy with L.A. Metro covering more than $6 billion in work over the next five years beginning with the Crenshaw Line.

This was a remarkable victory that won a unanimous vote across political lines by the Metro board as hundreds of workers and community members looked on.

But these construction jobs are only the beginning, as ancillary jobs are created when workers and their families spend their paychecks — meaning that in effect these transit system improvements are an essential part of an economic development strategy that will improve the region’s economic competitiveness, thereby creating even more jobs while moving us toward the goal of prosperity for all.

Join us and help Move LA honor the efforts of these transit champions at their gala event on Wednesday, June 13 from 5 to 8 pm. Hors d’oeuvres by Homegirl Café. Live music from the ’20s and ’30s by Doozy. Buy your tickets at Move LA’s website: www.movela.org.

Related Topics:Move LA
Up Next

The Last Word on Wisconsin – Really