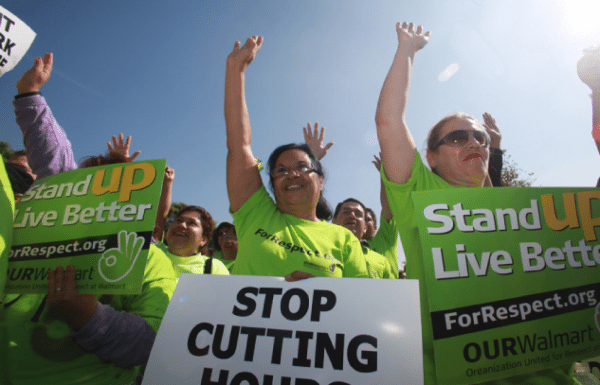 Talk about your perfect storm. Walmart, which in recent years has been raising the danger level for shopping on the day after Thanksgiving, has now created a new attractive nuisance that’s being called Gray Thursday. This is when Walmart stores open at 8 p.m. on Thanksgiving evening, ostensibly to alleviate security and safety pressures on Black Friday, the traditional pre-dawn running of the bulls – er, shoppers – down the stores’ aisles in search of cut-rate prices.

The safety rationale of opening a store six or eight hours ahead of Black Friday is highly debatable; what’s not disputed is that Walmart is ordering in armies of its underpaid employees to work on a night they have traditionally enjoyed as a holiday. But the only tradition this company respects is that of making money on the backs of its mistreated “associates” – workers who are only able to live paycheck to paycheck with the help of food stamps and other government-provided poverty entitlements. (See infographic below.)

Thousands of those workers, fed up with this “traditional” abuse and now enraged by having to give up a precious holiday evening, are planning nationwide walkouts and protests on Black Friday. Organized by OUR Walmart and Making Change at Walmart and the Corporate Action Network (CAN), these unprecedented actions are expected to hit nine major urban stores and dozens of others across America.

The historic Black Friday strikes and protests come on the heels of several wildcat walkouts at more than two dozen stores, including those in Pico Rivera, Seattle, Dallas and Washington, D.C., as well as strikes at Walmart-contracted warehouses in California and Illinois. (None of the workers involved in the store and warehouse actions are unionized and thus none enjoy collective bargaining protections from dismissal or employer reprisals.)

Walmart is trying to downplay the comparative number of its 1.4 million U.S. employees who will likely participate in protests. But, as Ken Margolies, senior associate at the Worker Institute at Cornell University, told CNN Money, “Even if there aren’t that many people, it could have an effect, because their campaign in front of stores could discourage shoppers.”

The mega-chain is doing more than playing numbers games with the media, however. With almost ghoulish irony, Walmart went to the National Labor Relations Board to file an unfair labor practice claim, seeking to keep its workers in their blue vests on Friday rather than the pavement outside their stores. The complaint names the United Food and Commercial Workers International Union (UFCW) as a defendant, claiming the union is behind in-store flash mobs (“Sit-down in Aisle Seven!”) and allegedlyillegal picketing.

None of Walmart’s legal feints can camouflage the misery of its hourly workforce – half of which, as a recent Huffington Post investigation showed, earn less than $10 per hour.

There are several ways to support Walmart workers this Thanksgiving: By signing the Black Friday Pledge, sponsoring a striker and/or joining strikers in front of their stores on Black Friday. Los Angeles Walmart employees ask that supporters gather with them at the Paramount store at 14501 Lakewood Blvd., 10 a.m.-noon. (Organizers request that you RSVP; for this and event details and updates, go to the CAN website.) 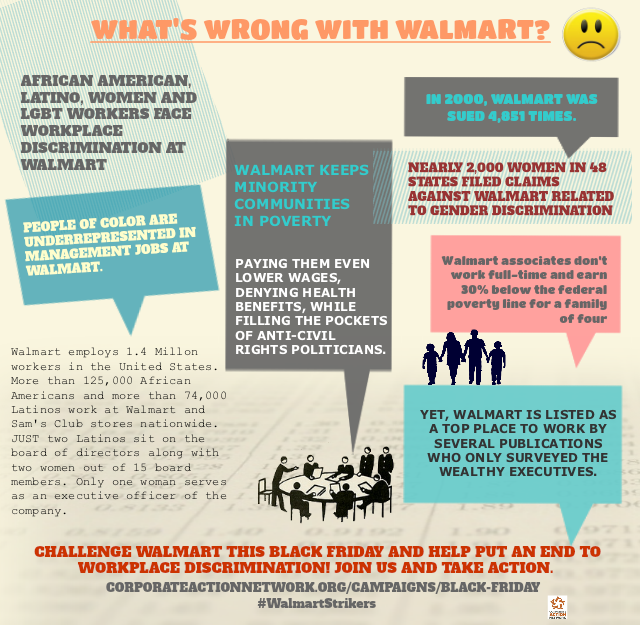 Related Topics:Black FridayWalmart LA
Up Next