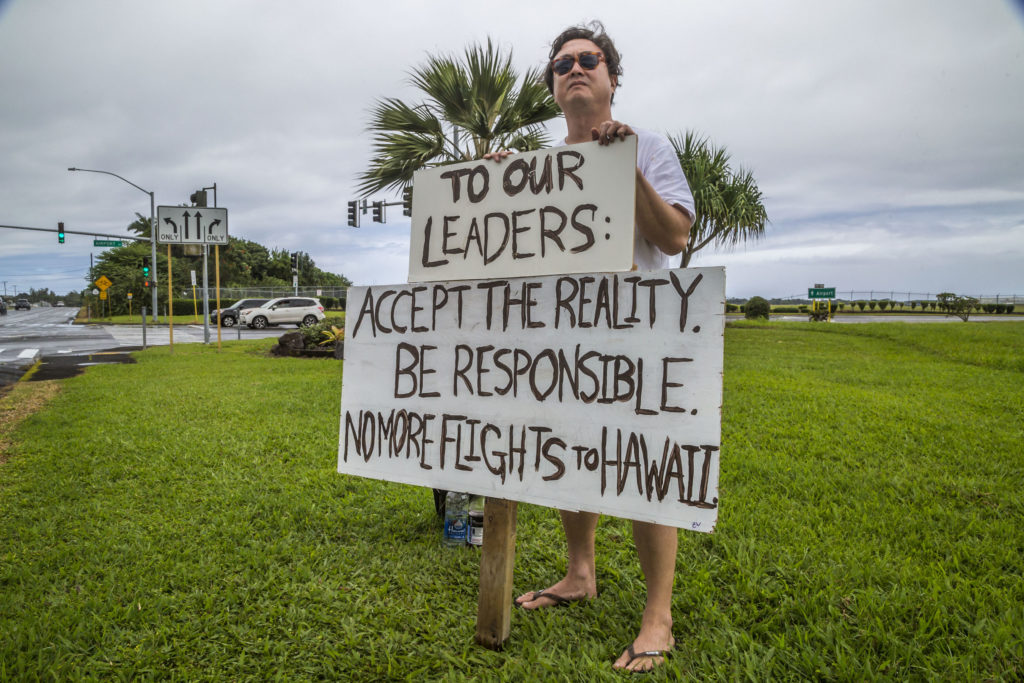 James “Jiro” Yuda holds a sign at the entrance to the access road to the Hilo, Hawaii, airport.  It reads, in part, “Be Responsible. No More Flights to Hawaii.” Yuda, 44, is the former deputy public defender on the Big Island, and now works in the Family Law Division of the Hawaii Department of the Attorney General.  “I’m doing this,” he tells Capital & Main, “because someone has to.  Our leaders have to accept the reality of this situation, and what has to be done.  We face an existential threat.”

Yuda says his protest was motivated by the inactivity of the Big Island’s political leaders in the face of the COVID-19 crisis.  On March 20 Hawaii Lt. Governor Josh Green, an emergency room physician on the Big Island, urged the state to suspend “all non-essential travel” in and out of the islands.  Some airlines have stopped or limited their service, including Hawaiian Airlines, which suspended its nonstop service between Maui and Las Vegas. In the meantime, the Big Island’s County Council urged Governor David Ige and island Mayor Harry Kim to impose a 15-day lockdown with a mandatory “shelter-in-place” order if conditions deteriorate, a move the mayor continues to oppose. In the meantime, another council resolution urged a limited restriction allowing only “essential businesses” to operate.  Hawaii has a state government, and each island is a county with a mayor and council.

Kim has argued that it is sufficient for the island to help businesses use preventative practices and for the county to sanitize its public areas.  In a broadcast statement last Tuesday Kim announced, “The County of Hawaii will maintain all of its services and operators as normal.”  He called a state directive on restaurant and church closures “a guide” and declared, “Within this county, restaurants, bars and places of worship may make their own decision as to open or close.”

Some Big Island restaurants have begun serving take-out food only, while others still have table service.  In the island’s numerous farmers’ markets, booths selling items other than food are now banned, while others selling fruit and vegetables from local farms continue.  Hilo’s Farmers’ Market, normally thronged with people, has seemed virtually deserted, while other markets have closed entirely.

Yuda feels more urgent measures are necessary, like those imposed in California by Governor Gavin Newsom.  “We can’t carry on like this,” he warns.  “Look at what’s happened in Italy.”  Hawaii’s economy is more dependent on tourism than any other state’s, and stopping travel to and from the islands would have an enormous impact, especially on workers in the tourism industry.  While stringent measures will cause sacrifices, he acknowledges, “You can’t work if you’re dead.  We have to put life before the economy.”

Yuda is one of 10 candidates who have filed papers to run against Kim in the next mayoral election—a primary on August 8 and general election on November 3.  Yuda says his priorities are public safety and climate change.