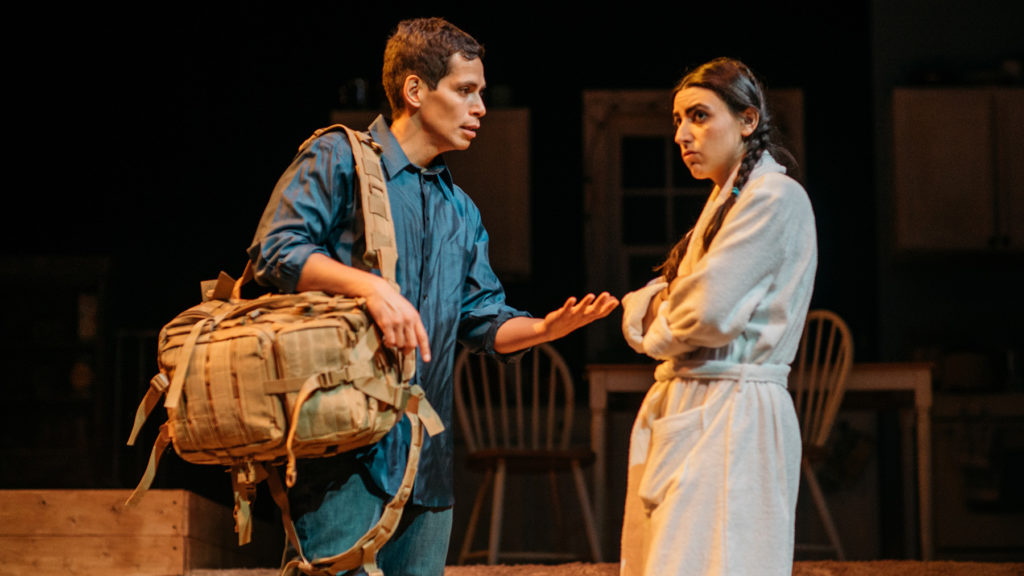 The Happiest Song Plays Last ends happily for its pivotal characters —and also, perhaps, for discerning theatergoers, who can’t wait to flee this lemon of a production.

Produced by the Latino Theatre Company and directed by Edward Torres at the Los Angeles Theater Center, this is the final installment in Quiara Alegría Hudes’ Elliot trilogy. (The two earlier titles were Elliot, A Soldier’s Fugue and Water by the Spoonful, produced by Center Theatre Group at the Kirk Douglas Theatre and Mark Taper Forum, respectively). Here, the playwright pays special homage to the folk music, food and familial culture of the Puerto Rican community. She also spotlights the current protest movements on the left (in the U.S., Mexico and Puerto Rico), tips her hat to the Arab Spring, critiques the American health-care system, and alerts us to the careless slaughter of Iraqi civilians by American soldiers and the problems of Iraqi expatriates. And that’s just the background stuff.

The story begins in 2010. As in Water by the Spoonful, it revolves around the fortunes of two cousins, who stay in contact via email: Elliot (Peter Pasco), an Iraqi war vet turned actor, and Yaz (Elisa Bocanegra), a music professor now living in poverty-blighted North Philadelphia, where she cooks for, and otherwise assists as many of her struggling neighbors as she can.

Elliot (who was played by a different actor in Water by the Spoonful) has undergone a transformation. In Spoonful, the character walked with a pronounced limp, the result of a war injury, and spoke with someone’s erroneous idea of how Philadelphians talk. Here, however, he’s been miraculously healed and is as spry as any athletic 20-something. Fortune has smiled on him; hired as a film’s combat consultant because of his military experience, he’s now starring in a movie about the Iraqi conflict, replacing the original lead who proved to be too truculent and unfit. His friends include Shar (Vaneh Assadourian), a young American actress of part Middle Eastern descent, and Ali (Kamal Marayati), a native Iraqi who’s emigrated with his family to Jordan for a better, safer life.

The three shoot their takes and chat about their pasts and news of the Arab Spring, which Elliot is itching to observe first-hand. Meanwhile Yaz, glimpsed in her kitchen amidst a pile of pots, is contemplating a fling with Agustín (Al Rodrigo), a guitarist and longtime married friend who wants her to have his child. She’s also playing mother hen to Lefty (John Seda-Pitre), a mentally displaced homeless person who addresses her as “mom” and relies on her for emotional support as well as for food and sometimes shelter.

Shifting between narratives, the play winds through a mountain of prosaic exposition as the characters talk about where they’re coming from and where they’d like to be (or in the case of Yaz, about neighbors and acquaintances whom we never see). The emails between the two cousins are about as exciting as the ones you may have received from your accountant cousin in Buffalo. Under Torres’ direction, the performances, which can often salvage and even elevate a so-so drama to great heights, lack texture and credibility. Only Marayati garners empathy as a kind and open man looking to bridge cultures and build friendships.

The staging (scenic design by Se Hyon Oh) does not help. The desert scenes are played out on the floor of the proscenium, without an effective backdrop to add ambience. The kitchen, always visible, is positioned upstage on a rise, in a cramped space that allows for little movement and makes for poor visibility. All I could see of Bocanegra much of the time was her back.

The best moments in the production are the musical interludes played by accomplished Puerto Rican guitarist Nelson González.

Recounting the Japanese-American Internments in a Musical

The 2018 Oscars Are Woke, But Hollywood Can Get Woker by Recalling Its Past