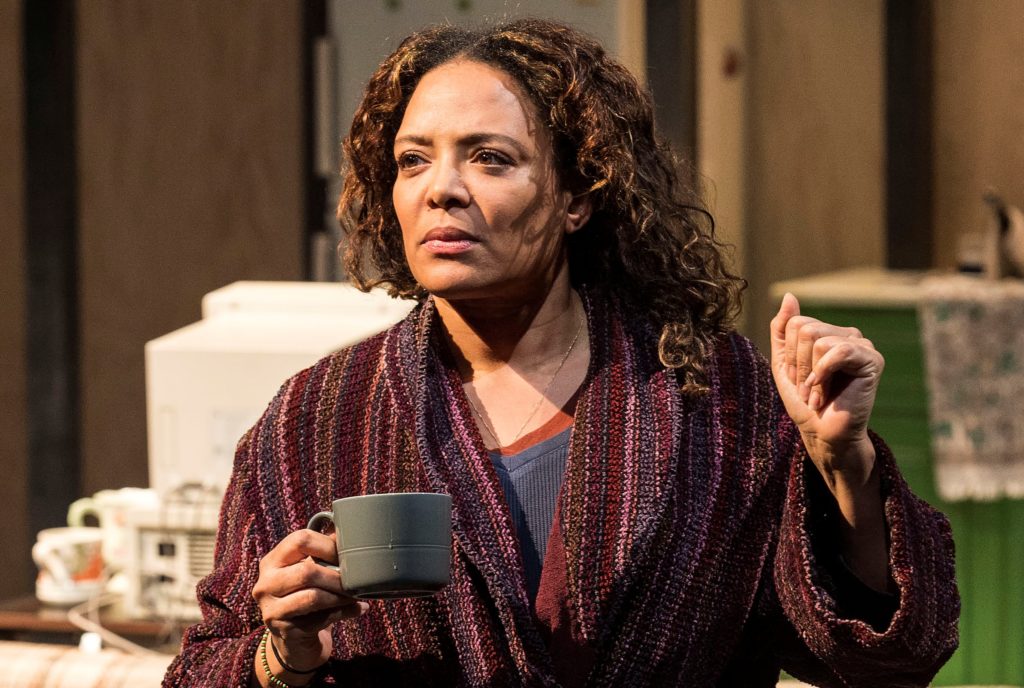 A 2012 Pulitzer Prize winner, Water by the Spoonful is the second in Quiara Alegría Hudes’ trilogy revolving around Elliot, a young war veteran from a Puerto Rican family living in Philadelphia. The first play, Elliot: A Soldier’s Fugue, is an interweaving of several narratives that relays the experiences of war from the standpoint of the working-class soldier. It’s a strong, lyrical work (although the production, at the Kirk Douglas Theatre through February 25, doesn’t fulfill that potential).

In this second, less compelling installment at the Mark Taper Forum (yes, I know it won a Pulitzer, but that goes to show how subjective literary prizes can be), the playwright juxtaposes Elliot (Sean Carvajal)’s post-war tribulations with the stories generated by a group of recovering drug addicts. The play’s fractured narrative proves a liability, with problems related to the writing compounded by Lileana Blain-Cruz’s lax direction, weak performances, and an unimaginative scenic design (Adam Rigg) that drains the show of whatever dynamic a couple of the performers manage to scrounge up.

The story takes place in 2009, six years after Elliot, haunted by a ghost and nursing a pronounced limp from a war injury, returns from Iraq. He’s working at a Subway and hoping for a career as an actor, while maintaining a mutually supportive friendship with his cousin Yazmin (Keren Lugo), a music professor. Elliot is struggling with his PTSD but managing to cope until his world spins out of control when his adoptive mom Ginny, much loved by her family and the community, nears death. These scenes involving a family in crisis alternate with others that depict the online squabbling of the members of the recovery group, who bear the pseudonyms of Chutes&Ladders (Bernard K. Addison), Orangutan (Sylvia Kwan) and Fountainhead (Josh Braaten). Haikumom (Luna Lauren Vélez), the site leader, is (we later discover) Elliot’s biological mother, Odessa, and she also is in recovery. The play takes its title from a recollection by Elliot of an event in his childhood: He and his baby sister were ill and needed a spoonful of water every hour – something Odessa failed to administer, with tragic results. Elliot has never forgiven her.

Much of Act 1 is taken up with the repartee among the group, but these characters never physically interact, and these “online” sequences are long-winded and static. It doesn’t help that the actors are positioned willy-nilly about the proscenium, fronting a drab living room interior unrelated to their dialogue. Why these scenes were not mounted in a separate area of the stage and with a different lighting design is a puzzlement.

The play gets more interesting in the second act, with Elliot’s emotional crisis intensifying and brought to a head in his confrontation with Odessa. Unfortunately, the drama is done in by subpar acting. Carvajal, employing a weird pseudo-street dialogue (it’s as if he has marbles in his mouth), sounds an unconvincing one-note. (As someone born and raised in Philadelphia, I can personally testify that that is not how residents of Philly speak.) Lugo’s Yazmin lacks personality of any sort — she seems to be there just for Elliot to play off of. Vélez’s performance in a linchpin role projects neither charisma nor clarity.

The best work is by Addison as a 50-something white collar guy emotionally invested in the group and with a growing attachment to Orangutan, a much younger woman, and Braaten as a well-heeled cokehead, desperately trying to hold his life together. These actors bring a certain heft to their roles that the other performances are missing. It’s too bad we don’t get to see them perform at their best.

The third play in the trilogy, The Happiest Song Plays Last, opens at the Los Angeles Theatre Center on Feb. 22, with an entirely different ensemble. Here’s hoping they can do better.