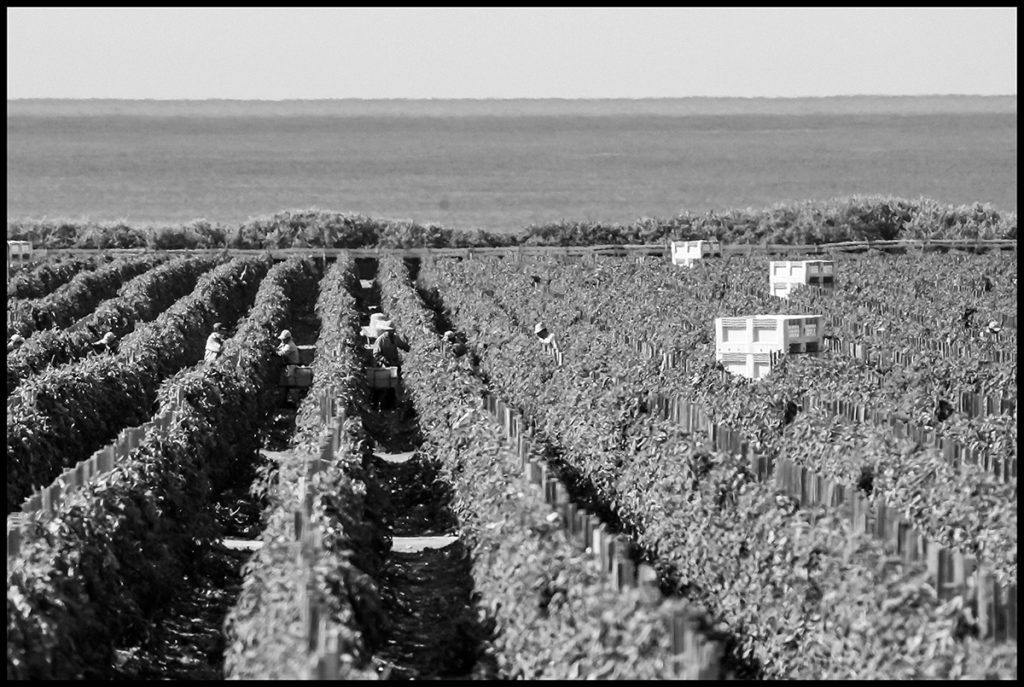 Tomato grower Harry Singh had an idea for speeding up the harvest in the fields he rents at the Camp Pendleton Marine Base near San Diego. His foreman told Serafín Rincón, 61, to pick beside two imported contract workers in their 20s. In the summer heat, Rincón was told to run. He could hardly keep up.

Rincón had come to work with his friends Santiago Bautista and Rufino Zafra. They were all longtime farm workers in the area. Bautista had been working in San Diego since 2003, and Zafra since 1975. All day they had to listen to shouting and insults from their boss when they fell behind. “Stupid donkey, you’re old now,” he shouted at them. “You can’t make it anymore!”

The three even started trying to hold it when they had to go to the bathroom, after being yelled at for going too often. Not that using those bathrooms was a pleasant experience. The toilet paper ran out so often they started bringing their own from home. Zafra would even wipe down the filthy port-a-potty with paper towels. The drinking water tasted like “hot soup,” Bautista said. He had a heart attack at work, but still the foreman wouldn’t let him stop working. A medical examiner said later the attack was caused by his working conditions.

Migrant farm worker Santiago Bautista had a heart attack at work, but his foreman wouldn’t let him stop working.

Singh was one of the first growers to bring H-2A temporary agricultural workers to California. These young, mostly male workers are recruited in other countries, mainly Mexico. They’re given visas that allow them to work in the U.S. but tie them to the employer that recruits them. “Many of the younger workers whom our plaintiffs had to keep pace with were H-2As,” explained Jennifer Bonilla of California Rural Legal Assistance. She introduced expert testimony of Dr. Kenneth Silver, who tied the speedup to the production requirements given the younger H-2A workers.

The U.S. Department of Labor allows growers to put production quotas into the contracts under which workers are recruited to come to the U.S., and to fire workers for not meeting them. If H-2A workers get fired before the end of their contract, they lose its guaranteed weeks of work and pay. They also become immediately deportable. The grower doesn’t even have to pay their transportation to the border, much less to the town they came from.

That gives a grower a lot of leverage to get workers to work at an inhuman pace. And because the H-2A workers can be forced into it, workers who are living in the U.S., and laboring at the same job, get pressured into it as well. Humiliation, firings and even heart attacks are the result. 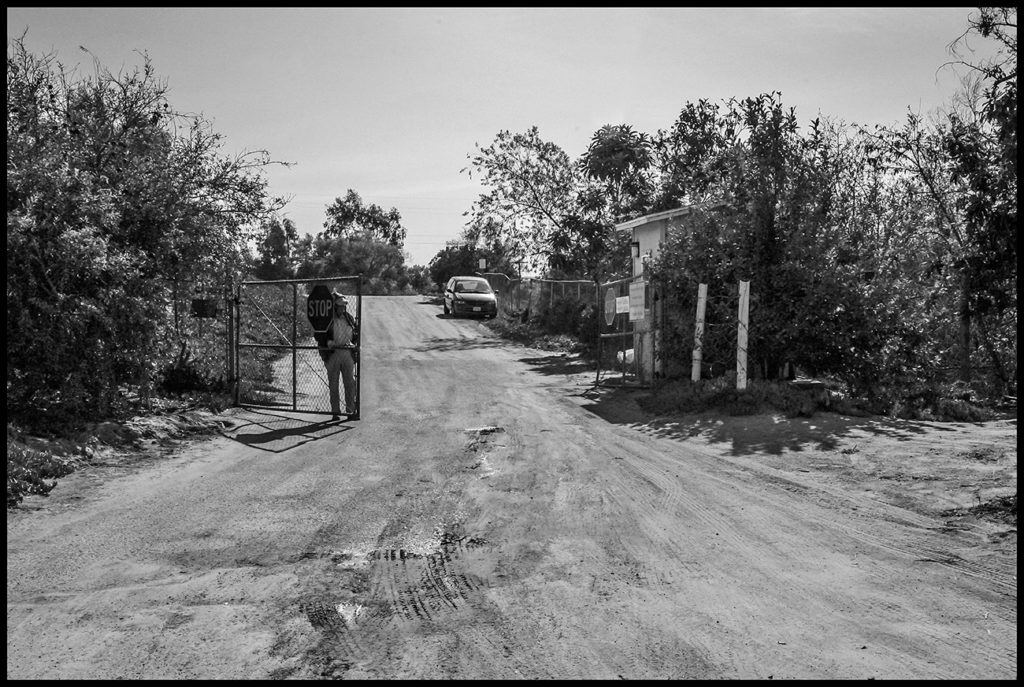 CAMP PENDLETON, CA – Behind this gate H2-A guest workers working for grower Harry Singh sleep in a labor camp on Singh’s ranch, keeping them isolated from the surrounding community. Guest workers can’t leave their jobs without being deported.

The Impact of the Explosive Growth of H-2A

This is just one impact on farm workers in California of the explosive growth of the H-2A guest visa program. Like everything connected to the state’s agriculture, it’s big business. California farm sales reached $46 billion in 2016 – an enormous production of food that has little to do with agribusiness’ oft-declared goal of “feeding the nation.” Almost half of what’s grown here leaves the country, in exports worth $20 billion.

Employing at peak season almost three quarters of a million people (719,000 in 2017 in California alone), this enormous industry needs workers. The growth of a captive, low-wage and vulnerable workforce at its heart has a profound effect, not just here, but across the nation.

The impact of guest workers will grow even more severe if Congress passes a bill (H.R. 4760, “Securing America’s Future Act”) that would not only put H-2A on steroids, but would do away with what little (mostly unenforced) protections currently exist for farm workers, both resident and recruited. Farmworker Justice, an advocacy group for farm workers in Washington D.C., calls the bill a “virulently anti-immigrant and anti-worker piece of legislation.” And four cabinet secretaries in the Trump administration have already promised growers to make the H-2A program more grower-friendly.

Growers claim that because of increased border enforcement, the number of available farm workers is falling, although the industry employed virtually the same number, 724,000, 20 years ago. “There is a severe ag labor shortage, and it’s only going to get worse,” wrote Tom Nassif, president of the Western Growers Association, on the WGA webpage. “Changing demographics and stringent regulatory barriers are causing the flow of workers crossing the border to dramatically slow down.” The Department of Labor estimates that about half of U.S. farm workers are undocumented, and in California the percentage is higher.

Unemployment in California’s farm worker towns, however, is always much higher than in urban areas. In April, for instance, the unemployment rate in Imperial County was 14.4 percent, in Merced County 8.7 percent, and Monterey County 6.7 percent. (In Los Angeles it was 4.1 percent and San Francisco 2.1 percent.) Yet according to Nassif, “Increased pay and overtime benefits aren’t going to attract any additional workers to the field. Those extra workers don’t exist.”

In reality, farm wages have been falling since the late 1970s, when the United Farm Workers was at its peak strength, and the base labor rate in union contracts was twice the minimum wage. Even non-union employers had to compete for workers by paying union wages. Today the average wage of California farm workers is just above the minimum wage — $11.68/hour by one estimate. The H-2A program, critics charge, allows growers to keep wages low, giving them an alternative to raising pay to attract labor. 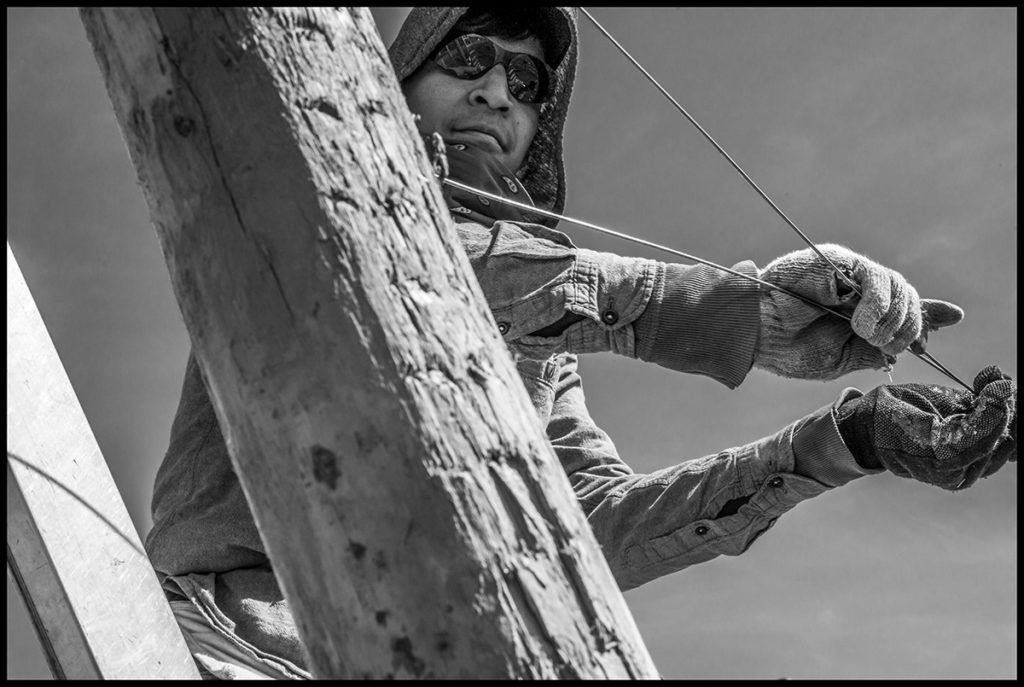 Once tomatoes are picked, they’re brought into a hot cavernous building where they’re sorted on high-speed conveyor belts. The three workers described intense pressure to maintain a very fast work pace, much like what Rincón experienced in the fields.

Then the company paid sorters less than the H-2A wage. This rate, called the Adverse Effect Wage Rate (AEWR), is set every year by California’s Employment Development Department. In 2014 it was $11.01/hour. The three workers, however, were paid the minimum wage — $8/hour until July 2014, and $9/hour afterwards — because they were “sorters” and not “packers.”

Both the older local workers and younger H-2A contract laborers had to meet high production quotas. If the line stopped, the three plaintiffs said, the company docked their pay until it began again (a violation of state law). And when it was running they couldn’t even leave to use the bathroom. Valerio, Bermudez and Gomez couldn’t keep up and were fired in August 2014.

CRLA Litigation Director Cynthia Rice charged, “It’s good that we can win these cases and get justice for some workers, but it’s a small number compared to the total number of H-2A and affected resident workers in the California workforce.”

Read part 2 of the story: Migrant workers housed like sardines, and the use of immigration enforcement to expand the H-2A visa program.

‘Janus’ and Its Supreme Court Enablers