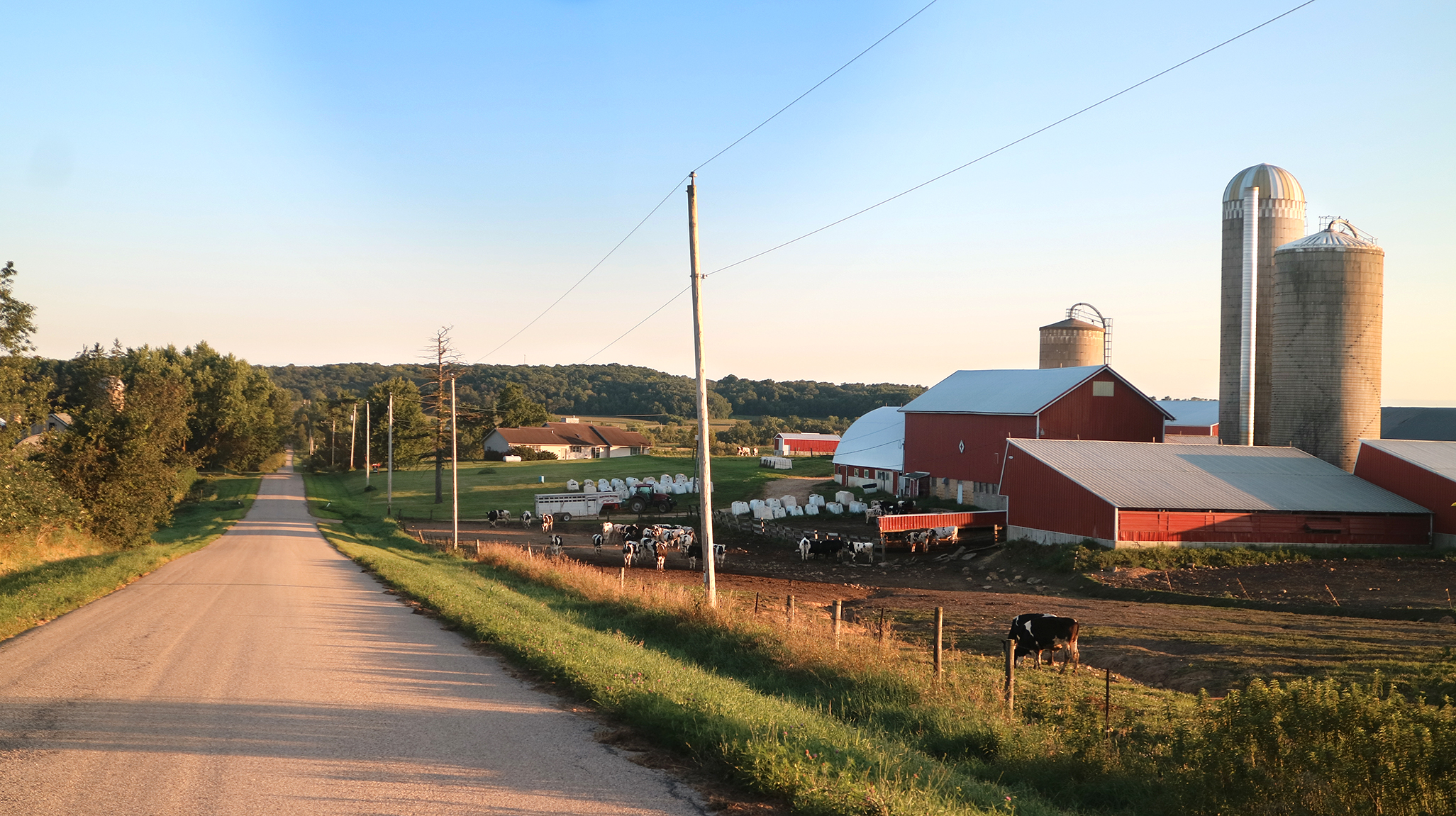 Farm Bankruptcies and Tainted Wells in the Dairy State

A key Wisconsin voting bloc pushes back against corporate consolidation.

When Nancy and Lynn Utesch moved their family to Kewaunee County, Wisconsin, in 2004, they didn’t realize they would have to fight to have safe drinking water in their community. At the time, they were aware of the health risks that came with living too close to a Concentrated Animal Feeding Operation – a CAFO, or a farm with over 1,000 animal units – but back then there were only two such farms in the county so they settled into a shady yellow house on a dead end road surrounded on all sides by their 150-acre grass-fed cattle ranch.

Over the years, however, as the number of CAFOs in the county increased to 16 by 2014, they saw the detrimental effects these giant farms have on the environment and economy around them. On a recent, windswept July afternoon, they drove out once again to watch as thousands of gallons of fermented cow manure were spread onto neighboring fields of freshly cut grain.

“It’s one thing to read about CAFOs, and it’s another to see for yourself,” Nancy said, as Lynn slowed the car beside an enormous complex of sheds designed to hold over 4,000 dairy cows. Parked on one end was a gleaming line of silver milk tankers and beside the road stood a rusty row of semis, flecked brown by the liquid manure they haul off to be spread elsewhere.

“This isn’t farming anymore,” Nancy said. “This is industry.”

Lynn is almost home when he comes upon a semi tanker pouring hot filth through a firehose attached to a spreader that leaves brown streaks in the field. To Nancy, it’s obvious that something must be done to protect the health of their community; “What’s going on the land is what’s in our water, that’s what it is,” she said. But for years the Utesches have struggled to convince state and federal lawmakers to pay attention to the concerning practices of CAFOs and have watched with frustration as government policy continues to entice farmers to grow bigger.

A Future of Fewer Farms

As they drive along, Nancy and Lynn point out houses with wells found to contain dangerous levels of nitrate, a byproduct of manure runoff. Lynn points out a small gray house facing the largest manure pit in the county. “That house, those people just left. They hadn’t had it for very long; they just walked away, defaulted on their loan. They knew they were never going to be able to repay it and they could never sell their house for what the loan was worth, so they just walked away.”

The expansion of CAFOs in Kewaunee County indicates a wider trend in American agriculture toward a system with fewer players, each with a larger share of the market. One by one, traditional family-owned dairies go out of business and are replaced by larger producers, often backed by unnamed investors. In 2019, Wisconsin led the nation in farm bankruptcies, yet state milk production continues to increase and the number of dairy cows remains relatively unchanged. As the state’s dairy farms fold at a rate of almost two per day, lifelong farmers are increasingly forced to find new ways to survive, and they face a frightening question of what to do next.

In 2019, Wisconsin led the nation in farm bankruptcies, yet state milk production continues to increase and the number of dairy cows remains relatively unchanged.

But the upcoming presidential election presents an opportunity for farmers to make their voices heard. In 2016, Wisconsin brought a narrow victory for Donald Trump, who won the state by a margin of around 23,000 votes thanks to strong support from rural communities. For Republicans hoping to hold their lead and Democrats who want to flip back the state, the concerns of voters in Kewaunee County should be at the forefront of their efforts.

Kara O’Connor, government relations director for the Wisconsin Farmers Union, says that years of poor government policy are largely responsible for many current problems in rural Wisconsin. “We have a cheap food policy. It’s set up to subsidize overproduction of commodities, and of course, if farmers get an incentive to overproduce, the value of what they produce goes down,” she said.

Lynn Utesch sees low milk prices as a driving force for the changes in the dairy world. “A lot of the smaller farms, in order to get a loan, they would go to the bank, and the bank would do all the math, and the bank would find they couldn’t repay the loan with the number of cows that they had, based on the price of milk at the time. So they were enticed to get more cows… you’re continuously on the treadmill of expansion in order to keep financially viable,” he said.

But the biggest problem facing farmers today, says O’Connor, is the undue influence a few large food corporations have on food markets.

Peter Carstensen, a senior fellow at the American Antitrust Institute and a law professor at UW-Madison, notes in an email that “the trend in all areas of agricultural production is towards larger buyers and reduced competition. This reflects a long-term failure of enforcement in merger law implicating the administrations of both political parties.”

O’Connor points to the coronavirus to demonstrate the fragility of the food supply chain; after a spike in cases temporarily closed food processing plants, some farmers were forced to dump their milk. She says a system with more local producers and processors would be able to adapt more quickly in a crisis.

“I’d rather see more farms rather than fewer, and I think it’s possible for us to stem the loss of farms, but it will take policy change to do that,” O’Connor said.

Most farmers have yet to see anything from Trump’s new trade deals with China, Mexico and Canada beyond a compensation check from calculated trade losses.

The Trump Administration has touted better trade as the cure to farmers’ struggles, but most farmers have yet to see anything from new trade deals with China, Mexico and Canada beyond a compensation check from calculated trade losses. In October 2019, Secretary of Agriculture Sonny Perdue sat down before a collection of concerned farmers at the World Dairy Expo in Madison. He tried to reassure farmers that the future is looking up. “Sometimes it’s amazing that things can be good and we feel so bad,” said Perdue, in response to one farmer’s plea for more government action to stop the recent rise in farm bankruptcies.

After the event, Perdue made headlines by telling reporters, “In America, the big get bigger and the small go out,” a comment that seemed to dismiss as inevitable the demise of hundreds of thousands of small farms across the nation.

Recalling the event from her Kewaunee home months later, Nancy Utesch wrinkles her nose and shakes her head with disgust. “They really stepped in it,” she said.

Before Kewaunee County garnered headlines in 2015 for contaminated groundwater found in almost one-third of tested wells, it was a region that perhaps few noticed. A quiet collection of dairy farms spread out between a few small towns, Kewaunee was known for its beaches along Lake Michigan and served as a nice rest stop for weekend vacationers on their way to Door County. It is home to just 20,500 people but over 100,000 cows, and most work outside of town is in agriculture. In 2016, two out of every three voters chose Donald Trump; and if yard signs in July are any indication of turnout in November, many likely will again.

But the Utesches say that politics are among the things that folks just don’t want to talk about, and for years they have worked to bring their neighbors together over community concerns rather than national politics. In 2011, they started a nonprofit called Kewaunee CARES (Citizens Advocating Responsible Environmental Stewardship), bringing neighbors together over concerns for their health; and in 2016, Lynn ran for State Assembly in District 1 of Wisconsin on a platform of providing clean water to rural communities. The campaign experience taught them both a lot about the concerns of their neighbors.

“I ran as a Democrat, and I’m more independent. I would say, I don’t really believe in the two-party system; I think it’s too restrictive and it doesn’t allow for enough voices… but I knocked on everybody’s door, I didn’t care if they were Republican or Democrat. And one of the most interesting things I heard was that the Republicans would wish that Bernie had won the nomination, because they couldn’t vote for Hillary, but they would’ve loved to vote for Bernie.”

Cattle rancher Lynn Utesch says that religion is a driving force of conservative support in national elections for people in his area.

Lynn thinks that on the local level, voters will choose candidates that address the problems they face, even if their beliefs don’t align completely with national partisanship. When it came to clean drinking water, he had support from both sides of the political spectrum and would often see his sign beside another that read “TRUMP 2016” in his neighbors’ front yards. He says that religion is a driving force of conservative support in national elections for people in his area.

Although he lost the race with nearly 40 percent of votes, Lynn is proud of the 90-some thousand dollars that were spent to defeat him and the fact that water quality is now a leading issue among voters in Wisconsin.

In November, he hopes Joe Biden will win, though he says Biden’s history of supporting corporate interests make him wary. Lynn’s ideal candidate is one that acknowledges systemic problems and doesn’t let corporate influence stop them from doing what’s best for their constituents. “I would like to see more and more politicians be responsive to the people, but I’m just not seeing it at this time,” he said.

As president of the Wisconsin Farmers Union, it’s Darin Von Ruden’s job to put the concerns of union members to candidates on the campaign trail this year. He spoke with Biden in May at a virtual roundtable on rural issues, and told the former VP that most problems “boil down to economics,” telling of the challenges monopolies present to small farmers and the inability for producers to control their milk prices. While Biden didn’t dwell on promises to trust-bust during the roundtable discussion, Von Ruden is pleased that Biden calls for strengthening antitrust enforcement in his Plan for Rural America.

The Farmers Union is nonpartisan and advocates for farmers no matter whom they vote for, but lately Von Ruden has seen a change in union members’ attitude. “What I’m hearing more and more is that we need to have an administration that, for us, provides some stability, not only for the county itself, but the marketplace… it’s a sign that farmers are frustrated with the current administration.”

Back in Kewaunee County the Utesches are sitting on their porch, but they are no longer talking about the manure being spread on the fields. They are talking about the uncertain future of small farmers at the heart of rural communities across America, and about a government that for years has put the interests of big businesses first.

“We get a lot of talk but we get very little action to change,” Lynn Utesch said.

“People should be outraged,” Nancy said. “They absolutely should be.”

Peter Kane is a writer born and raised in Wisconsin. He currently lives in Madison where he works as a field technician for the United States Department of Agriculture (USDA) Agricultural Research Service.

All photos by Peter Kane.