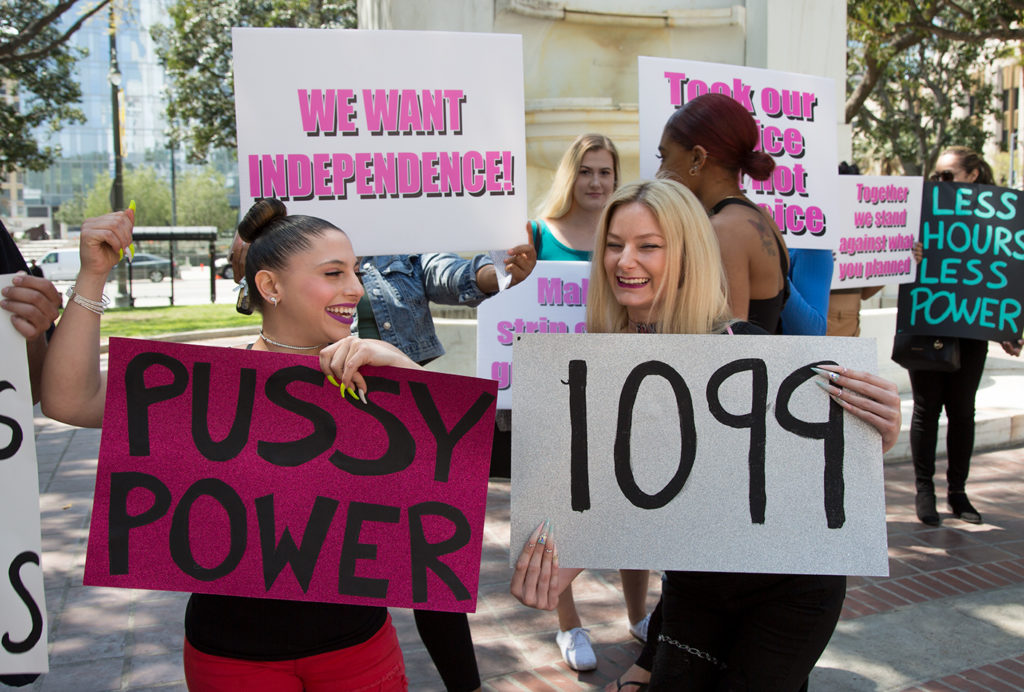 Carrying signs with nearly identical lettering and shouting “10-99!”, a few dozen strippers and their supporters protested in front of Los Angeles City Hall Tuesday to demand their right to be independent contractors, rather than employees. The chant referred to IRS Form 1099, used by independent contractors, who typically lack the job security and workplace benefits of company employees.

Study: Nearly 10% of California’s workforce is made up of freelancers and independent contractors.

Deanna LaPoint, one of the protest’s organizers, told Capital & Main that she and fellow protesters didn’t opt to be employees. “We always had the choice in where we work,” LaPoint said of the pre-Dynamex days. ”Now we don’t have that choice and it’s not fair.”

Supposed job freedom was not the only issue that had “pro-independent contractor” protesters up in arms. Megan Fowler, who dances at a Déjà Vu strip club in Bakersfield, said that since the company made her an employee, she’s been slammed with unexplained fees and wage theft.

“The club is now in full, complete control of us,” she said. “And anything they want they get. They want to take an extra 30 percent, like they did from me on Saturday without informing me. They’re going to. They’ll take what they want.”

“I still buy my own outfits, I do my own hair,” she added. “I still show up on time. I work my full shift. I still do stage, I climb that pole. I do everything they want me to do.”

Members of a smaller counter-protest, from the grassroots group Soldiers of Pole, said they are sympathetic to Fowler’s problems, but that the solution is not to become independent contractors. Rather, they claimed, as employees they have the ability to unionize to protect against the wage theft that Fowler alleges. 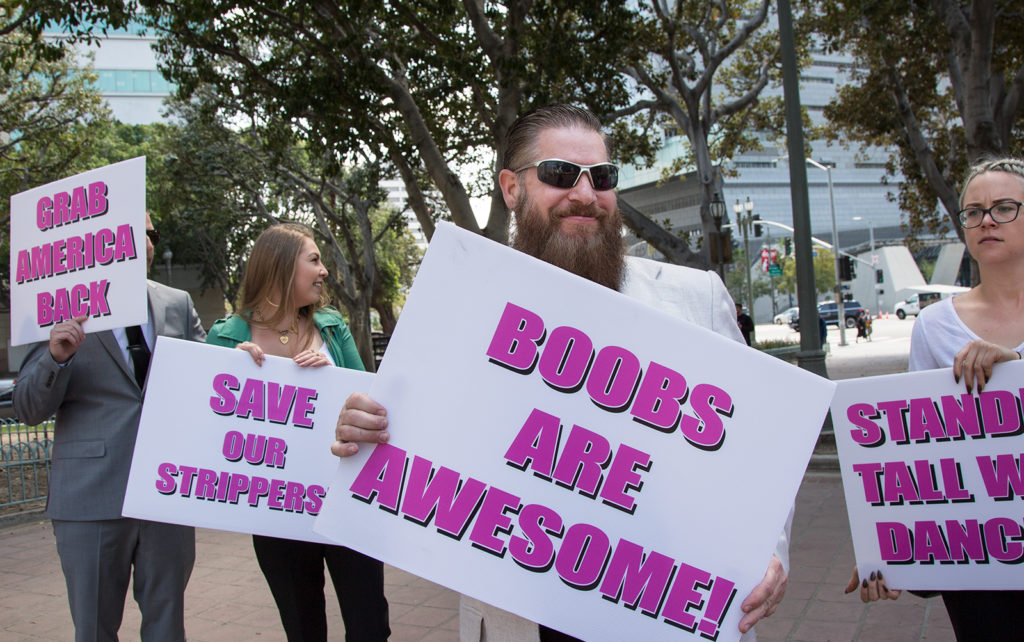 About a quarter of the protesters were male. This man identified himself as a patron of strip clubs, and said he was there to support the girls.

West Seegmiller, political action director of the Los Angeles chapter of Sex Workers Outreach Project (SWOP), attended the Soldiers of Pole counter-protest to support their members’ efforts to unionize. He blamed the alleged poor treatment of dancers not on the Dynamex ruling, but on the dancers’ corporate employers.

“After the Dynamex decision,” Seegmiller said, “owners and managers of these clubs made the working conditions more of a living hell for dancers than it was before. It’s disgusting that the corporations, mainly Déjà Vu, are supporting this effort to get rid of employee status, and it’s sick that they use this labor-rights language, saying, ‘Your jobs are in danger,’ and ‘This is about rights and freedom.’ They’re trying to take away workers’ rights.”

“They’re using Déjà Vu’s talking points,” Rey said. “I’ve been trying to tell them that employee status is better for us. I try to tell them we want the same things. They won’t take our pamphlets. They’re not listening.” (LaPoint denied her group is with the coalition.)

In an email, Independent Entertainer Coalition spokesperson Katie Figueroa said her organization is against employee status for dancers but that it has nothing to do with Déjà Vu. Rather, it is against the company for not “standing up” for dancers’ rights. “They have a huge platform and voice and instead of fighting for our right to be independent contractors, they caved and forced all their dancer [sic] to become employees.”

In January dancers in San Diego filed another class action suit claiming that Déjà Vu Services, which has more than 100 clubs in the U.S. and several in other countries, retaliated against them for their prior legal activities by drastically cutting their pay.

Ryan Carlson, director of operations at Déjà Vu Services, said that the corporation decided to make its dancers employees because the chain had become a “litigation target” due to Dynamex, and that doing so has put the company at a disadvantage against clubs still paying their dancers in cash. He claimed that dancers are “getting screwed by the state of California, not by the clubs.”

“Many entertainers still dislike employee status because there are payroll taxes, withholding taxes, and various restrictions like scheduling requirements and shift maximums that simply cannot be mitigated within the employee framework,” Carlson said by email. Responding to allegations of retaliation, wage theft, and inflexible schedules, Carlson said the company was “proud to offer health insurance, a competitive average hourly wage that exceeds $30 per hour, and flexible scheduling.”

Rey, however, said she has worked at Déjà Vu clubs, where she experienced the kind of exploitation that Fowler claimed, which is why she wants to help her and others unionize. “I am passionate about helping the most marginalized women get what they deserve.”

Beyond the live adult entertainment industry, euphemistically referred to as gentleman’s clubs, companies in California industries have largely ignored the Dynamex decision. A proposed law making its way through the California Legislature, Assembly Bill 5, may, if passed, force their hand by codifying Dynamex into law and reclassifying millions of California workers who have been considered independent contractors. Earlier this week, AB-5 passed through the Assembly Labor Committee on a 5-0 vote, with amendments exempting doctors, insurance agents, financial advisers and direct sellers, but not exotic dancers. A 2017 study  showed that nearly 10 percent of California’s workforce is composed of freelancers and independent contractors.