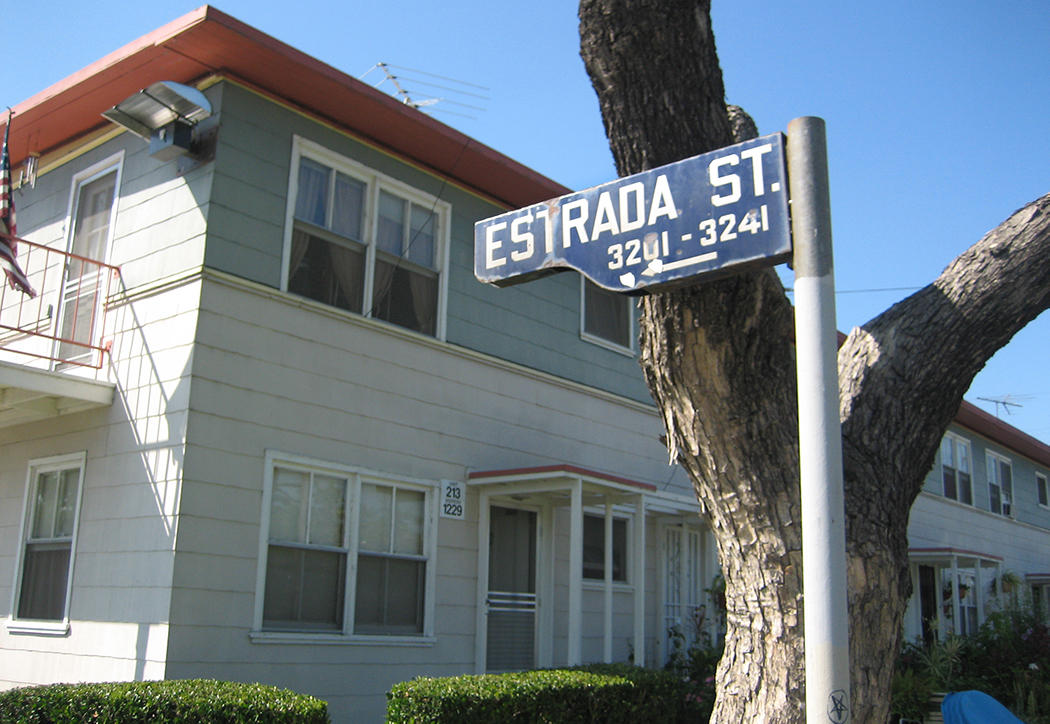 All four of Gloria Carrillo’s children are sick, but she doesn’t know exactly why.

In the past, Carrillo wondered if her children’s health problems are hereditary, but more recently she has come to suspect that another answer could lie in the large square patches of grass and open dirt connecting the 414 homes of Estrada Courts, a low-income housing community operated by the city of Los Angeles in Boyle Heights, on the Eastside of the city.

Indeed, Estrada Courts, where Carrillo has lived since 2007, sits within the 1.7 mile contamination zone around Exide Technologies’ former lead battery recycling facility that was shuttered in 2015 after decades of spewing toxic contaminants like lead and arsenic into the surrounding neighborhoods.

“I’m angry. Are their children worth more than our children?”

Carrillo’s suspicions remain unaddressed, but her doubts and fears are shared by many among the 1,122 residents currently living at Estrada Courts, 326 of whom are children under 18. That’s because the vast majority of the soil there remains untested for lead contamination, despite the more than seven years that have passed since the first residential soils were sampled around Exide, and roughly four years after two child care centers within Estrada Courts were tested.

With experts warning that elevated soil lead levels at Estrada Courts are a virtual certainty, environmental advocates decry the lack of testing thus far as another example of the government meeting the needs of the poorest with chronic inertia.

Indeed, during this time, 8,555 largely privately owned properties have been sampled within the 1.7 mile radius around Exide, and over 2,000 homes have been remediated.

“I’m angry,” said Carrillo in Spanish. “Are their children worth more than our children?”

“It’s just tragic,” said Amy Kyle, a retired member of the faculty in Environmental Health Sciences at the University of California, Berkeley. The effects on brain function and development from lead exposures in unborn babies and young children are well documented, and include loss of IQ points, greater chance of behavioral problems and impaired language comprehension. Among an array of other possible health effects is an increased risk of asthma. It should also be noted that Boyle Heights is one of the most environmentally burdened communities in California, with air pollution a major problem.

The Department of Toxic Substances Control (DTSC) – the state agency responsible for overseeing the residential cleanup around Exide – recently entered into an access agreement with the Housing Authority of the City of Los Angeles (HACLA), which operates Estrada Courts, and sampling work is scheduled to begin there in January of next year, according to a DTSC spokesperson.

“Once the sampling is complete and the results analyzed, we can determine whether cleanup is necessary,” the spokesperson added. It’s unclear, however, if current funding will stretch far enough to remediate contaminated hot spots in Estrada Courts.

Asked about the oversight’s slow-moving wheels, the DTSC spokesperson explained that the agency has conducted a “significant amount of phone calls, emails, and in person meetings” over the years in order to obtain permission from the housing authority to sample Estrada Courts. “Unfortunately, despite these efforts, our requests for access were ultimately declined,” the spokesperson wrote in an email. After following up with HACLA in April 2019, however, the DTSC received conditional agreement for access to Estrada Courts, the spokesperson wrote. “In June of 2020, HACLA brought in outside counsel to work with DTSC on finalizing the access agreement.” Shark mural by Daniel Martinez. In the 1970s and 80s, artists painted more than 90 murals on the Estrada Courts buildings. Photo by Lisa Newton.

The housing authority provided a two-page timeline outlining a glacial bureaucratic waltz spanning more than four years, including two protracted periods – one of 14 months, one of six months – when the agency was waiting for the DTSC to take the next necessary steps towards an access agreement. When asked if the amount of time it has taken to test the soils at Estrada Courts is satisfactory, given the possible health risks to residents from lead exposure in that time, Courtney Gladney, a HACLA spokeswoman, wrote: “We have provided a comprehensive timeline to you on our engagement with DTSC since 2016 and more recently beginning in 2019, and HACLA will continue to collaborate with DTSC moving forward.”

According to Joe Lyou, president and CEO of the Coalition for Clean Air, a statewide organization focused on air quality issues, the years-long wait for testing at Estrada Courts constitutes a critical lack of “action and leadership,” coupled with a community without the “political power or connections to make it happen any quicker.”

It was all the way back in October of 2013, when the extent of Exide’s pollution began to be fully realized, that the DTSC first ordered mapping of the lead contamination in the residential properties surrounding the former lead battery recycling plant, which at that time was still in operation. In June and December of 2016, the DTSC conducted soil sampling at two child care facilities within Estrada Courts. One of them, Estrada Child Development Head Start, contained lead levels as high as 190 parts per million (ppm).

In 2017 the DTSC set a target cleanup goal for homes with soil lead levels “that exceed the representative soil lead concentration of 80 ppm.” That level is a state health screening threshold. The agency is currently prioritizing the cleanup of homes with levels of lead above 300 ppm. The World Health Organization has flatly stated that there are no safe lead exposure levels.

In the seven years since the cleanup process began, two childcare centers constitute the only official sampling conducted at Estrada Courts.

Because Head Start was a child education facility, the DTSC prioritized it for cleanup. Before that could happen, however, the building was demolished “without DTSC’s knowledge,” the agency spokesperson wrote, adding that “after we discovered a new facility had been constructed in 2018, DTSC determined the facility would need to be resampled.” That additional sampling – necessary, say experts, because contaminated soils and dust could have dispersed into the surrounding environment – hasn’t yet occurred, the DTSC spokesperson confirmed.

Until now, the two childcare centers constitute the only official sampling conducted at Estrada Courts. However, in 2016, Jill Johnston, an assistant professor of preventive medicine at the University of Southern California’s Keck School of Medicine, and a member of the state-approved Exide Advisory Group, conducted soil tests at two homes there. Johnston used an XRF analyzer, a hand-held device capable of measuring elements such as lead in a given sample.

She discovered the average soil lead level outside one of the homes was 476 ppm. The other had average soil lead levels of 135 ppm. Johnston also tested the dirt for arsenic, cadmium and antimony – other toxic elements that can be harmful to human health. Johnston detected levels of these elements around both homes above certain state, federal and global health safety levels.

Given how several privately owned properties immediately abutting Estrada Courts had or currently contain elevated soil lead levels – the highest was 1,115 ppm – it’s a “virtual certainty” that soils at Estrada Courts will contain lead levels above 80 ppm, and a “strong possibility” lead levels will be over 300 ppm, said Jim Wells, an environmental geologist who also sits with the Exide Advisory Group. As a result, Estrada Courts should have been recognized as a “priority concern” for testing, said Wells.

Another agency, the L.A. County Department of Public Health, said it has conducted a number of health education efforts since 2015 in and around Estrada Courts, such as grassroots community outreach campaigns, bilingual mailers, a program to directly engage residents and multiple free blood lead testing events. But some residents, like Carrillo, argue that government authorities, including the county health department, haven’t done nearly enough to inform residents of the potential health risks. 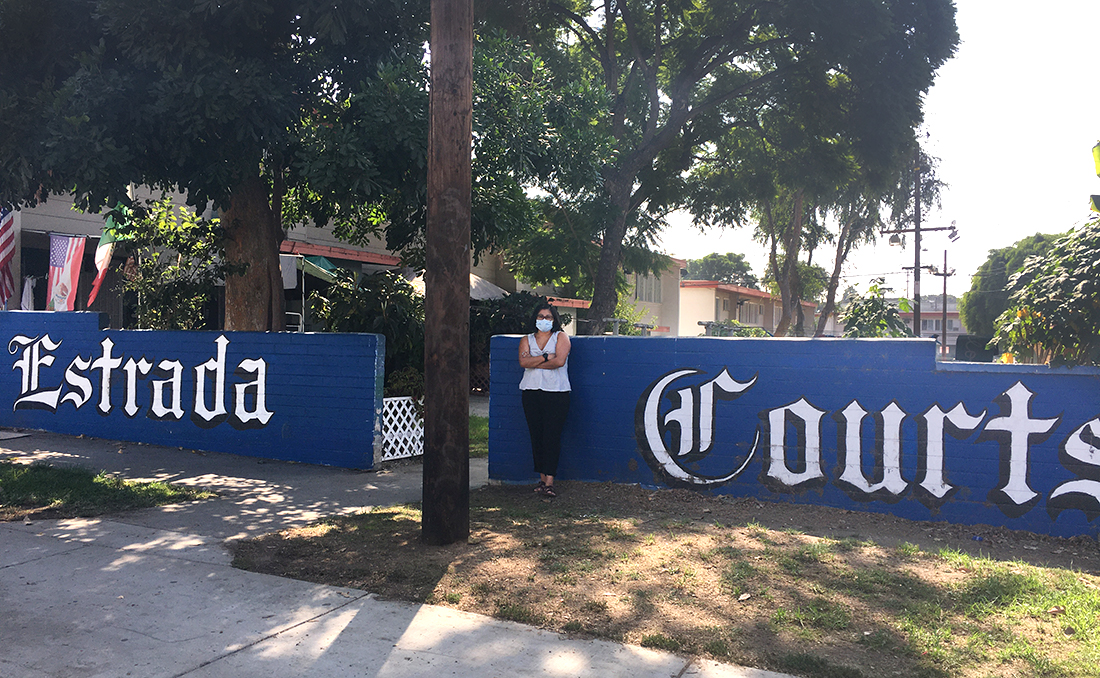 “I feel like we’re the forgotten of the forgotten,” said Idalmis Vaquero, who has lived at Estrada Courts for 13 years. She is a University of California, Los Angeles, law student and member of the Communities for a Better Environment advocacy organization. In the evenings, when the temperature drops, Vaquero said, Estrada Courts comes alive with children playing barefoot on the grass and dirt. As for the delay in testing, “It wouldn’t have taken this long if we were an affluent community,” she added.

The big question today is: Are current cleanup funds sufficient to remediate potentially contaminated hot spots at Estrada Courts? At an Exide Community Advisory Board meeting in September, Su Patel, assistant deputy director of DTSC’s Site Mitigation and Brownfields Reuse Program, said that if properties that have yet to be sampled contain soil lead levels above 300 ppm, they will be added to the priority cleanup list, and if the current funds run dry, “We will add them to the next group of properties that we will be asking funds for cleanup.”

The issue of additional cleanup funding is playing out against a murky fiscal backdrop. The state, currently grappling with a $54.3 billion deficit, is still reeling from a federal bankruptcy court ruling last week that allowed Exide to essentially abandon its financial obligations to remediate its former plant and surrounding communities, though the state is appealing that ruling. California taxpayers have already paid some $270 million towards the cleanup project.

Questions of mismanagement similarly hang over the DTSC’s financial handling of the project. Earlier this year, for example, the DTSC fired one of the contractors on the residential cleanup for massive cost overruns. According to an estimate using numbers provided by the DTSC, the contractor, Parsons, blew through roughly three-quarters of its $82 million budget to clean less than half of the 1,610 residences for which it was responsible. The average per-home expenses of the current contractor, NEC Construction, have also increased from $65,000 last year to $67,000 – a result of the technical challenges posed by a pandemic, the DTSC argues. The state auditor is currently conducting an investigation into the project.

Yenderina Barboza’s concerns, however, are more immediate – the health and safety of her two children, six and 12, who she rarely lets outside to play because of the potential risk of contamination. Barboza, 40, has lived at Estrada Courts for roughly a dozen years. She would move if she could, but “I really don’t have any other options,” she said. Is Barboza worried about her own health? “Of course,” Barboza replied. “More than anything though, [that of] my kids.”