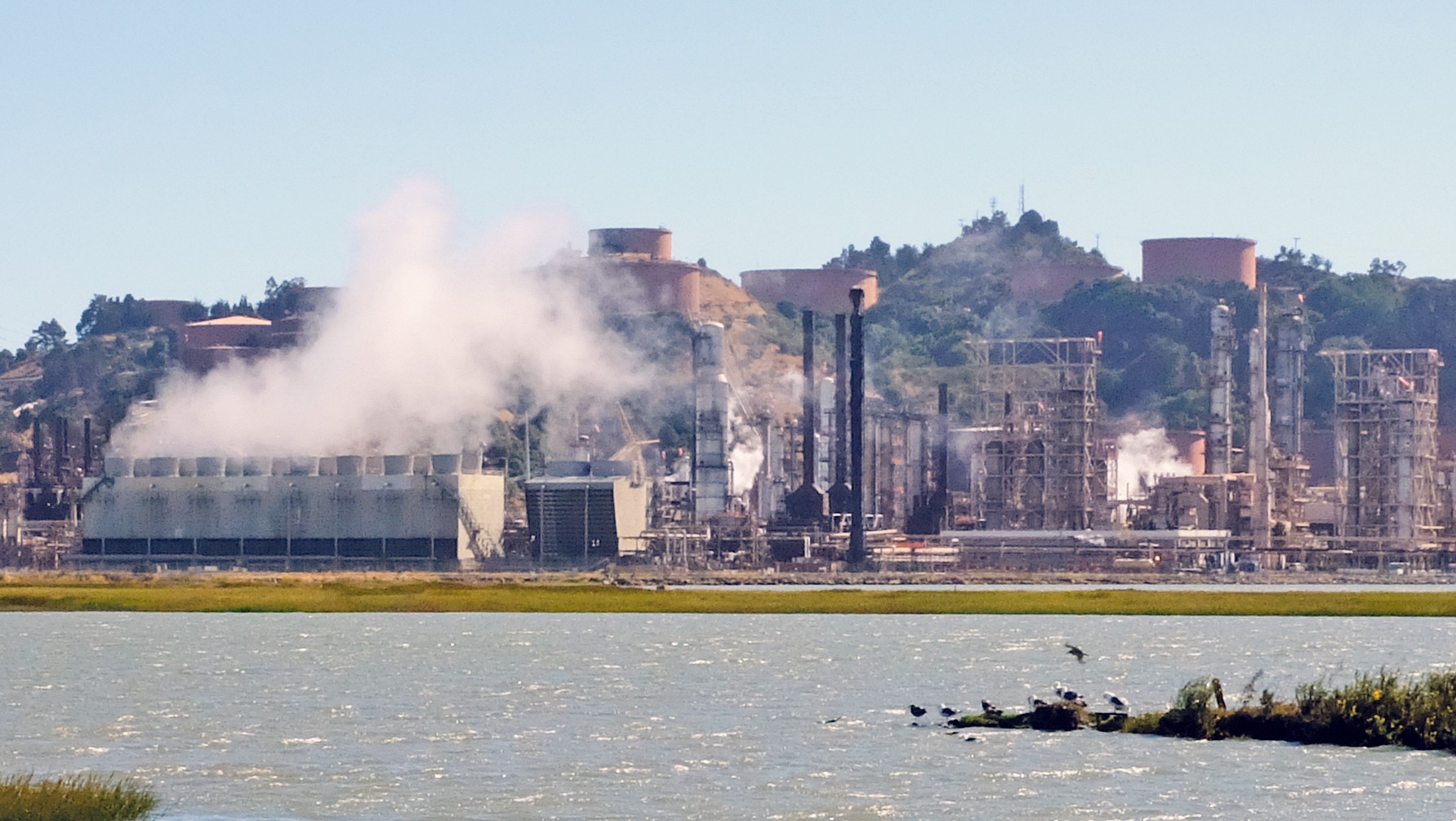 The morning after a quarter-inch hole in a pipeline owned by Chevron leaked petroleum fluids into the San Francisco Bay on February 9, Richmond Mayor Tom Butt struck an optimistic tone about the incident at the oil giant’s refinery.

“I think in the big picture it’s going to be OK,” Butt told one local press outlet.

On his blog several days later, Butt wrote the city had “dodged a bullet on what turned out to be a relatively small spill with no lingering effects.” In a city council meeting a week after the spill, he offered no thoughts when a councilor brought up the incident.

According to a unified command that included representatives from Chevron, the U.S. Coast Guard, the state’s Department of Fish and Wildlife and Contra Costa County Health Services, the spill was upwards of 700 gallons, or five gallons a minute at its peak.

A factsheet from the National Ocean and Atmospheric Administration says the kind of diesel that reportedly leaked from the pipeline is considered to be “one of the most acutely toxic oil types” and that “fish and invertebrates that come in direct contact with naturally dispersed and entrained diesel in the water column may be killed.”

Suspicion of Chevron runs high in the community of many low income residents, given the company’s long legacy of accidents and environmental harms.

But while the mayor’s public comments were positive, in private he offered a much more critical assessment, according to an email Butt sent to a regulator at the California Department of Fish and Wildlife — who was also a personal friend. He emailed a Chevron representative and an official at the U.S. Coast Guard as well.

“In spite of a fairly positive public report I made on the oil spill on February 10, I want to share with you that I was not impressed at all with the cleanup effort,” Butt wrote on February 13. In a separate email, he accused Chevron of “downplaying” the spill.

The contrast in tone and opinion, revealed in emails obtained through a California Public Records Act request, comes as residents and environmentalists are increasingly asking tough questions about the leak and the adequacy of Chevron’s response. Suspicion of the company runs high in the community of many low income residents, more than half of whom are Black and Latino, given its long legacy of accidents and environmental harms.

The resources deployed in the spill’s immediate aftermath appeared “scant and ineffective,” the mayor continued, including what he described as “two or three small boats active and a couple of discontinuous booms,” which are floating physical barriers used to contain oil that has spilled in a body of water.

He also complained that he had observed an oil sheen stretching north along the San Pablo Peninsula but not any personnel trying to contain it. That area is home to eelgrass beds that support numerous fish and invertebrate species.

“Contrary to the apparent lack of activity on the water, the Incident Command Center at Chevron was buzzing with activity, with maybe a hundred people from multiple agencies milling around and looking busy,” Butt wrote. “There was a large map on one side of the Command Center that I was told recorded in real time all the critical information about the spill and spill response. … It turned out that the videos I took from the helicopter were more informative to people in the center than anything they had.”

Reached by phone, Butt told Capital & Main that regulators from Fish and Wildlife appeared not to have been aware of the sheen spreading northward until he showed them videos on his phone.

“The email I sent out was more intended to provide my first impression and get answers than it was to provide a public summary,” Butt said.

Greg McGowan, the program manager of response technology assigned to the spill for the Office of Spill Prevention and Response, a department within Fish and Wildlife, responded to Butt’s email defensively.

“The response you saw was good. There is always opportunity to improve,” said McGowan, who described Butt in the email as a “longtime family friend.”

McGowan told Capital & Main he was defending his division’s response, not Chevron. In the days after the spill, two teams he oversaw searched for injured wildlife and observed none.

“I don’t understand why the mayor is playing both sides and not being transparent with the community.”

A separate division of Fish and Wildlife has collected samples of soil, water and mussels, and may initiate a natural resources damage assessment if a chemical analysis shows significant damage.

But the private exchange raises concerns for Claudia Jimenez, a city councilmember in Richmond who is pushing Chevron and investigating authorities to hold a public hearing into the leak and response.

“I don’t understand why [the mayor] is playing both sides and not being transparent with the community,” Jimenez told Capital & Main. “This is why I am pushing for a public hearing, with Chevron, with everybody on the city council, so we have that version, and the public can hear about it, and it’s not these backroom conversations.”

Within two hours of the leak, Chevron communicated to the city of Richmond that it had been “small.” Since then, Chevron issued public updates as part of the unified command, which was disbanded on Feb. 23, after it reported 48 hours during which sheen was no longer visible in the bay.

For Ben Eichenberg, an attorney for the local environmental group San Francisco Baykeeper, the unified command structure suggests an inappropriately close working relationship between the oil company and the entities tasked with regulating it.

“Critical response requires independence from the oil industry, which is impossible under a unified command that partners so closely with the responsible entity,” Eichenberg said in a city council meeting a week after the spill.

Eric Laughlin, a spokesperson for Fish and Wildlife, told Capital & Main that this structure has been used for oil spills nationally and internationally since the 1970s, when it was pioneered in California.

Other questions remain for Eichenberg, Jimenez and other Richmond residents, including why Chevron turned down the city’s offer of a support boat to help with clean-up efforts as sheen spread north. Chevron did not notify authorities of the spill for at least half an hour after a member of the public reported seeing oil in the water.

A spokesperson for Chevron didn’t respond to questions sent by Capital & Main.

Chevron is by far Richmond’s largest employer, and its assets comprise about a fourth of the city’s tax base.

Chevron is also a major player in California politics, spending more than $10 million lobbying against tighter oil and gas regulations in 2019 and 2020. Nationally, Chevron is the largest U.S. oil company and among the world’s top emitters of greenhouse gases — even as it seeks to recalibrate its public image as an ally of the climate movement.

In recent years, the Richmond refinery has come under heavy scrutiny. In 2012, an explosion and fire that started with a leaking pipe sent 15,000 people to the hospital with respiratory issues and prompted the state and county to bring criminal charges against Chevron.

The company was ordered to pay $2 million in fines and restitution. A civil suit filed by the city resulted in a $5 million settlement. The company is also investing $90 million in various community programs and grants in the city through 2025, an arrangement prompted by the 2012 disaster.

A lawsuit filed by commercial herring fishermen alleges that Chevron concentrated the leaking diesel in an area home to fishing populations.

Andrés Soto remembers visiting the refinery as a boy when his friend’s father worked there. The longtime civil rights activist and lifelong Richmond resident now works for Communities for a Better Environment, and he sees Chevron’s relationship to Richmond as a prime example of environmental injustice.

“It is distressing that it has not been made more public that the oil sheen spread all the way up to the northern end of the peninsula,” Soto said.

A lawsuit filed by commercial herring fishermen alleges that Chevron concentrated the leaking diesel in an area home to fishing populations.

According to Laughlin, the Fish and Wildlife spokesperson, the unified command determined that the weather the day after the spill was “ideal” for the sheen to degrade naturally on its own, and did not detect sheen in the bay by Feb. 12.

The agency is investigating the cause of the spill and Chevron’s response and could levy penalties if the company is found to have violated regulations.

The spill has added momentum to a growing movement among some residents to hasten Richmond’s “just transition” to an economic base independent from Chevron and fossil fuels.

At the Feb. 16 city council meeting, all four councilmembers present voted in favor of a motion to begin researching what the transition would look like in the city. Butt was the sole dissenter, but he told Capital & Main he believes a just transition is going to “happen sooner or later.”

“If Chevron closes tomorrow, it would pretty much put the city out of business,” Butt said. “But that’s not an excuse to do something that is harming the planet.”