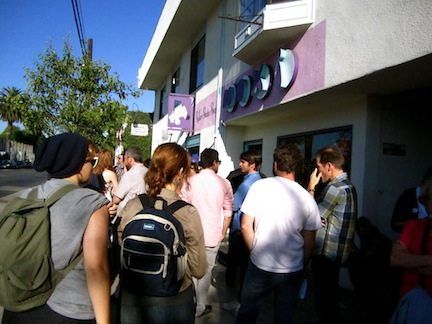 (On November 6, Long Beach became one of three cities in the country to pass minimum wage ballot measures, and the only one to guarantee paid sick leave to workers. This story is the second in a weeklong series of reflections on that important victory.)

Canvassing: One home and business at a time.

Numbers never lie – that was our mantra at the Yes on Measure N headquarters. Canvassers for the hotel living wage law would come back talking about how a voter just wouldn’t give them the time of day, or how the 100-degree weather dragged on their hustle. And we would respond, “Well, numbers don’t lie.” This was just our way of saying, some days are good, some days are harder, but come the end of the campaign numbers will tell the true story of our hard work. And while I don’t want to oversimplify how we won, it really boiled down to one word: relationships.

Relationships matter. Four years ago I began wonderful friendships with hotel workers in Long Beach. Since then I have had the pleasure of building working relationships with many Long Beach organizations, like The Center Long Beach Center, the Long Beach Area Peace Network, Building Healthy Communities Long Beach, and so many more, and had the great privilege to build lasting friendships with community members and leaders. These relationships have endured tough times. And in recent years I have been able to get to know many of our city council members who work hard to make Long Beach a place that represents all its residents.

But perhaps the most important relationships needed to win an election with such a controversial idea as living wages for hotel workers are those with voters.

This is where we won. We spent more than 20 weeks in 2012 in neighborhoods talking to voters, in contrast to most electoral campaigns, which devote only four to six weeks to talking to voters and trying to confirm their support for a measure or candidate. Our mission is not merely to pass policy but to transform our city, to build a movement that transcends policy and empowers community members to live their convictions and vote with their actions on every other day of the year beyond Election Day. Shaking off our apathy takes more than mailers or a stockpile of political or community endorsements. Without an honest conversation rooted in integrity and discovery, voters will toss their mailers or scoff at politicos. They will call us outsiders. They will believe the press. They will opt not to care.

This is why relationships matter.

Canvassers are not surveyors – they are organizers tasked with building a movement that can only win with trust and collective vision. Now I’m not saying we can do this with every voter during a brief chat at the door with them. But we can begin there. Being honest and sharing our personal story with voters goes a heck of a lot farther than littering their doorsteps with flyers (as did the opposition to Measure N).

So when people ask, “How did you do it?” my answer is simple: building relationships with as many voters as possible. In the spring of 2012 we knocked on half a million doors in Long Beach, and we did the same thing again in the fall. This is how we win. No tricks. No gimmicks. No shortcuts.

My urge to knock on my neighbors’ doors might seem odd, but it’s just my need to connect and build trust with my community. And I’m fine with that.

Jeannine Pearce is a community organizer with the Los Angeles Alliance for a New Economy.

Election 2012: The Revenge of the Baby Boomers