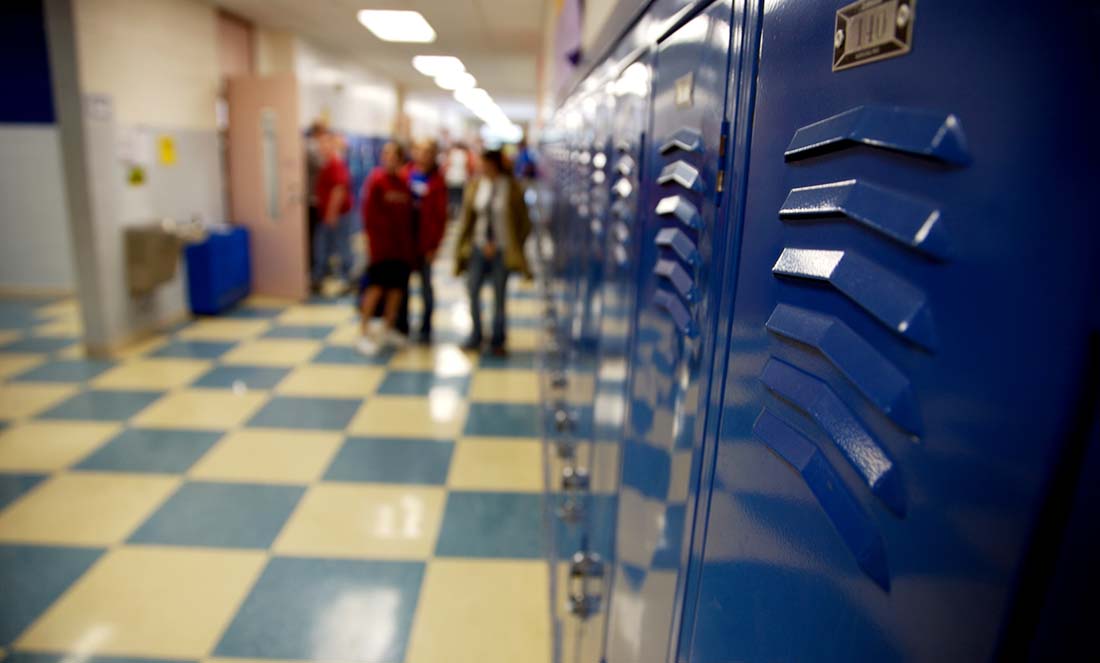 At 8 a.m. outside Susan Miller Dorsey Senior High School in the Crenshaw District of Los Angeles, students line up with individualized QR codes confirming them as COVID-free before the first bell. They arrive in school busses, on foot and on skateboard. They amble north toward campus from Obama Boulevard and south from the Expo line station on Farmdale Avenue. Then, one by one, they do what Los Angeles School Police officers now cannot: They go inside their school.

Following the George Floyd uprisings, the Los Angeles Unified School District cut its police budget by $25 million in the summer of 2020, and this February, following months of student campaigning, it redirected that money toward a $36.5 million Black Student Achievement Plan (BSAP). The LAUSD also reduced its school police force by a third, eliminating 133 positions. In addition it kicked cops off campus — now, officers stationed nearby can enter only if asked.

The plan also includes the hiring of mental health counselors at 53 schools with high concentrations of African American students, funds ethnic studies curriculums and assigns school “climate coaches” to all secondary campuses in the district. The board also banned officers from carrying pepper spray, citing officers’ use of the chemical on students, as well as chokeholds.

The climate coach, a staff position invented this year, serves as an additional counselor for students navigating high school in Los Angeles. Trained in conflict resolution, the climate coach is an on-campus “advocate” for students, according to a February presentation to the school board.

“The discomfort comes from watching folks who have relied on the police in their classroom figure out what it looks like to be restorative instead of punitive, but it’s a delicious discomfort,” Reese says. “You can’t call a police officer to escort this student away from you when you have conflict. You have to figure out what it means to manage conflict with this person — or [to] utilize other adults who love them.”

For Reese, the BSAP is already working. In October, a student yelled and stormed away after Reese marked him tardy. But days later, the student returned and apologized, explaining that a campus climate coach had walked him to the school’s wellness center and talked with him about the incident.

“I knew BSAP was in the works,” she says. “I knew it was something I wanted to be a part of. I thought it would be a perfect fit.”

Maleeyah Frazier, a junior at Hamilton High School and an organizer with Students Deserve, a coalition of students, teachers and parents fighting to dismantle policing in LAUSD, organized successfully to move cops off campus. Frazier says she already knew one Hamilton climate coach as an active parent in the school community.

“It feels close to home,” Frazier says. “I just check in. A lot of people call her Mama Shinn.”

At Hamilton, post-cop life is proving bumpy, according to special education English teacher Conrad Hurtt. The school has endured seven fights in nine days, he says.

“All I’m hearing from the other teachers is that they really miss the police, especially with all these fights,” says Hurtt. “All I hear is, ‘Sure wish we had the police!’”

Frazier has also noticed a mixed response. “There’s a backlash,” she says, explaining that her reputation as an activist can mean she gets blamed for discipline incidents when they break out on campus.

“All I’m hearing from the other teachers is that they really miss the police, especially with all these fights.”

But Frazier says she feels safer with cops off campus, citing the killing of an 18-year-old student and mother by a Long Beach school police officer the week Frazier spoke with Capital & Main. After fighting with another student, Milikan High student Manuela “Mona” Rodriguez climbed in the passenger seat of a car with her boyfriend and his 16-year-old brother. When the car accelerated  past school police officer Eddie Gonzalez with tires squealing, Gonzalez fired two shots into the car without hesitation, according to video of the killing, one shot striking Rodriguez in the head. Gonzalez has been charged with murder, District Attorney George Gascón announced Oct. 27.

It’s not an isolated incident, Frazier says. “Having cops — it didn’t amount to safety to me when I saw cops put a knee in a little girl’s back,” she says.

But Hurtt laments the cops’ exit at Hamilton. The school’s three security officers are overwhelmed by the 2,000-strong student body, he says.

“I thought they were excellent role models,” Hurtt says of the campus cops. “But I understand at the same time — all the protests that happened. People have been killed.”

In addition to making schools more welcoming to Black students, the Black Student Achievement Plan seeks to close literacy and numeracy gaps that persist in LAUSD. It declines the terminology of the “Black student achievement gap,” however, a phrase that has plagued (and hogged) educational debate for decades. The achievement gap is a problematic framework that focuses on test scores rather than the environmental factors influencing student achievement, according to Prudence Carter, a Brown University sociologist researching enduring inequalities in education. Carter prefers to think of it as a racial and socioeconomic “opportunity gap” that consistently punishes students of color in the United States.

“It’s a social fact that a constellation of resources in a child’s life will determine their test scores,” she says. “There’s all this noise in the system of test-taking. And then we deem these children a deviant.”

With that caveat, gaps in student test scores persist in LAUSD. In the 2018-19 school year, 86% of Black students did not meet or nearly met district reading standards, according to district data, in comparison to 60% of white students who read below district standards or nearly met them.

According to a study from the Center for Education Policy Analysis, arresting a student at school doubles their risk of dropping out.

Experts recommend a variety of strategies to close the gap in test scores, including more investment in elementary schools. But research also shows that student interaction with the police worsens academic achievement for minority groups.

Suspending and arresting students are both examples of what researchers call “exclusionary discipline,” which has been found to reduce achievement by removing students from class and alienating them from their teachers. One central goal of the Black Student Achievement Plan — replacing exclusionary discipline with restorative justice conflict resolution — is not just ethical, but will also boost test scores, increase graduation rates and increase college enrollment, its supporters argue.

In New York City, increased street-level policing in minority communities under the NYPD’s “Operation Impact,” which began in 2004 and lasted for over a decade, “significantly reduced test scores for African American boys” while also lowering attendance. Studies of a tandem “Impact” program that upped police presence in schools found the police expansion resulted in lower attendance and fewer students taking the SAT.

According to a study from the Center for Education Policy Analysis, arresting a student at school doubles their risk of dropping out.

In short, for district employees who aren’t trained educators, school police can significantly impact students’ educational futures. And officers can wield that power frivolously, according to a 2014 Temple University study of school police officers, which found that 77% of surveyed officers said they had arrested a student just to calm them down. Another 68% “indicated that they made arrests to show students that actions had consequences; and 55% indicated that they had arrested students for minor offenses because teachers wanted the arrests to occur,” the study says.

Ja’Myah Broussard is a peer mediator at Willowbrook’s King/Drew Magnet High School of Medicine and Science, part of a team of students who try to resolve conflicts before they turn into fights. Clashing students put their names on a sign-up sheet, and Broussard’s team leads them in discussion. If an agreement is reached, the students sign a contract committing to the resolution.

The Black Student Achievement Plan expands ethnic studies, which has been shown to help close testing gaps between white students and students of color.

“I love being a peer mediator,” says Broussard. “Sometimes students just want to be heard by other students who know what they’re going through instead of talking to an adult. They’re not the ones learning eight hours a day.”

The BSAP additionally expands ethnic studies at LAUSD. Ethnic studies is shown to close testing gaps between white students and students of color.

At Dorsey, history and ethnic studies teacher Princess Reese found that freedom to design a curriculum tailored to students’ backgrounds has built an engaged and motivated classroom. When Reese asked the class to study a Native American tribe, one student, whose family is indigenous to Minnesota, studied his own tribe and interviewed his own grandfather. Reese also led a recent unit on the school to prison pipeline, a relevant subject at a Dorsey High transformed by the Black Student Achievement Plan.

This isn’t just statistics for us,” says Reese. “This is our people. The people who are pushed out of school — those people are us.”

With a $20 billion operating budget, LAUSD is the nation’s second-largest school system, and the cost of the BSAP is just a drop in the bucket. In the coming years, the board may continue to redirect dollars from policing to services, with members narrowly opposed to further cuts to the police budget. In June of this year, a motion to eliminate 32 vacant campus police positions was defeated 3-3, with board member Jackie Goldberg abstaining; more recently, a motion to lend individual schools power to reinstate police was also defeated.

As the board squabbles, Students Deserve organizer Maleeyah Frazier has abolition in her calendar.

“We’re fighting to dismantle the Los Angeles School Police by sometime next year — before I graduate high school,” she says.