How are men doing in our anemic economic recovery? David Brooks, after discussing his favorite Western movie, argues in his latest column, Men on the Threshold, that men are “unable to cross the threshold into the new economy.” Though he’d probably argue that he’s talking about generational changes, he focuses on a few data points from the current recession, including that “all the private sector jobs lost by women during the Great Recession have been recaptured, but men still have a long way to go.”

Is he right? And what are some facts we can put on the current recovery when it comes to men versus women?

Men had a harder crash during the recession, but a much better recovery, when compared with women.

Indeed, during the first two years of the recovery expert analysis was focused on a situation that was completely reversed from Brooks’ story. The question in mid-2011 was “why weren’t women finding jobs?” Pew Research put out a report in July 2011 finding that “From the end of the recession in June 2009 through May 2011, men gained 768,000 jobs and lowered their unemployment rate by 1.1 percentage points to 9.5 percent. Women, by contrast, lost 218,000 jobs during the same period, and their unemployment rate increased by 0.2 percentage points to 8.5 percent.”

How does that look two years later? Here’s a graph of the actual level of employment by gender from the Great Recession onward: 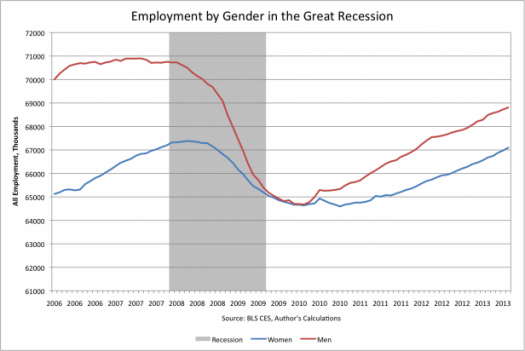 If you squint you can see how women’s employment is flat throughout 2011, when men start gaining jobs. Since the beginning [of] 2011, men have gotten around 65 percent of all new jobs. That rate started at 70 percent, and has declined to around 60 percent now. So it is true, as Brooks notes, that women are approaching their old level of employment. But the idea that the anemic recovery has been biased against men is harder to understand. The issue is just a weak recovery — more jobs would mean more jobs for both men and women, but also especially for men.

But maybe the issue is the occupations that men are now working. As Brooks writes, “Now, thanks to a communications economy, [men] find themselves in a world that values expressiveness, interpersonal ease, vulnerability and the cooperative virtues.” This is a world where they either can’t compete, or won’t. The testable hypothesis is that men are doing poorly in occupations that are traditionally female dominated.

However the data shows that men are moving into female-dominated occupations, and taking a large majority of the new jobs there.

How has the gendered division of occupations evolved since 2011? Here is first quarter data from 2011 and 2013 of occupations by gender from the CPS [Current Population Survey]. As a reminder, your occupation is what you do, while your industry is what your employer does. Occupation data is much nosier, hence us moving to quarterly data: 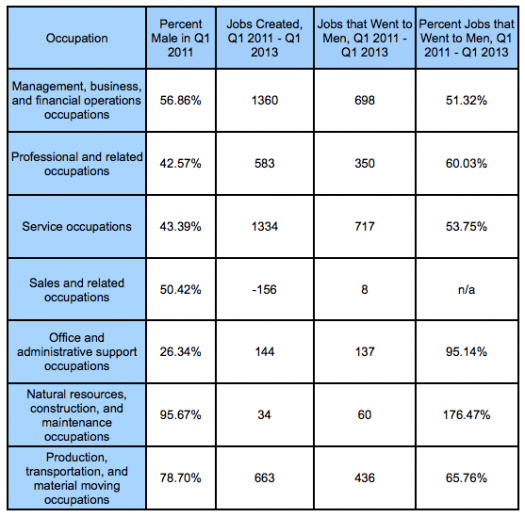 Ok that’s a mess of data. What should we be looking for in this?

First off, men are moving into occupations that have been traditionally gender-coded female. Office support jobs, which Bryce Covert and I found were a major driver of overall female employment decline from 2009-2011, are now going to men. Men have taken 95 percent of new jobs in this occupation, one that was only about 26 percent male in 2011. We also see men taking a majority of jobs in the male-minority service occupations. Men are also gaining in sales jobs even while the overall number of jobs are declining. That’s a major transformation happening in real-time.

(Meanwhile, it’s not all caring work and symbolic analysts out there. There’s a massive domestic energy extraction business booming in the United States, and those jobs are going to men as well. If you were to break down into suboccupations this becomes very obvious. Men took around 100 percent of the over 600,000+ new “construction and extraction” jobs, for instance.)

It’ll be interesting to see how extensive men moving into traditionally female jobs will be, and to what extent it’ll challenge the nature of both them and that work. Much of the structure of service work in the United States comes from the model of Walmart, and that comes from both Southern, Christian values and a model of the role women play in kinship structures and communities.

As Sarah Jaffe notes in her piece A Day Without Care, summarizing the work of Bethany Moreton, “Walmart…built its global empire on the backs of part-time women workers, capitalizing on the skills of white Southern housewives who’d never worked for pay before but who saw the customer service work they did at Walmart as an extension of the Christian service values they held dear. Those women didn’t receive a living wage because they were presumed to be married; today, Walmart’s workforce is much more diverse yet still expected to live on barely more than minimum wage.”

How will men react when faced with this? And how will their bosses counter?

(Mike Konczal is a fellow with the Roosevelt Institute, on whose blog his post first appeared. Republished with permission.)