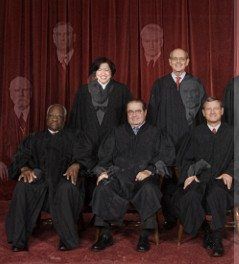 The 1936 Republican presidential candidate, Alf Landon, based his bid to defeat FDR on repealing Social Security. In a campaign speech Landon promised: “We must repeal. The Republican Party is pledged to do this.” That year’s election night tally revealed who was in touch with Americans and who wasn’t. FDR: 523 electoral votes; Landon: 8 electoral votes.

Roberts Rules: Why the Obamacare Victory Is No Win