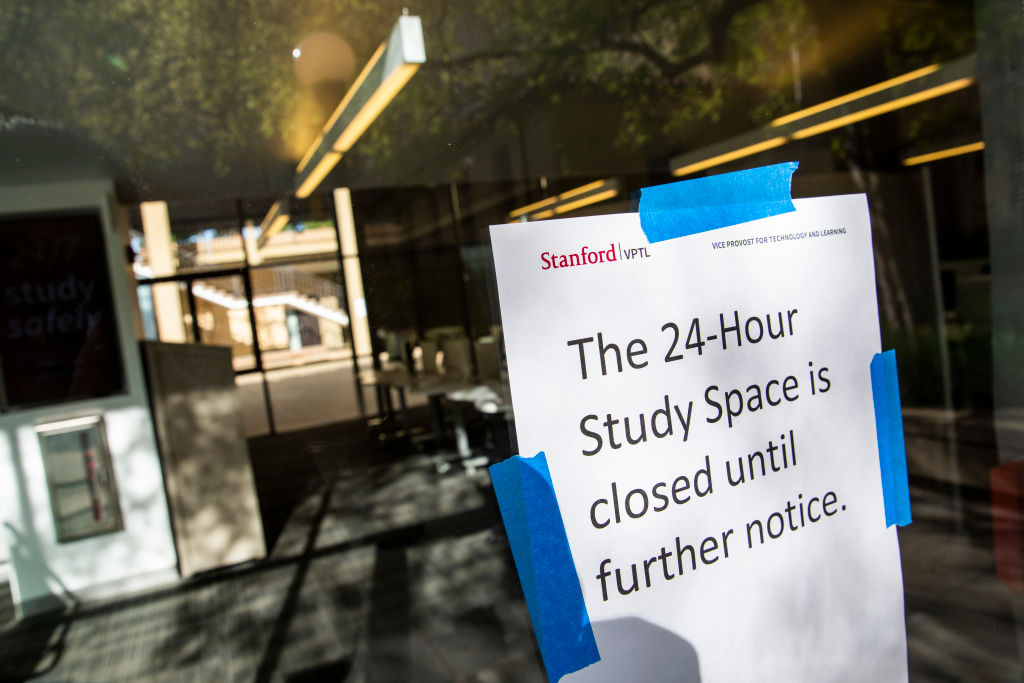 Scene at Stanford University, which has moved the remainder of its winter quarter classes online. (Photo by Philip Pacheco/Getty Images)

Coronavirus topped the week’s education headlines as districts throughout California closed schools for the remainder of March and others postponed standardized test-taking until late April or May. The drastic response to Tuesday’s upsurge of COVID-19 confirmations came in the wake of Sacramento’s Elk Grove Unified’s decision to cancel classes and sports events for a week after the family of a district elementary school student tested positive on March 6. District officials initially moved spring break ahead one month to cover the cancellations, but then rescinded the move in the face of parent complaints.

A Tuesday vote by L. A. Unified’s school board that delegated to the normally tight-fisted Supe Austin Beutner the emergency discretion to shutter schools by Friday morning resulted in LAUSD joining San Diego Unified in pulling the COVID-19 ripcord. Schools in both districts will be closed two weeks beginning Monday. In an attempt to offset the burden for working families, LAUSD will on Wednesday reopen 40 schools as “family resource centers,” offering hot meals and childcare to parents in need. As of Friday morning, California’s Coronavirus toll stood at 198 confirmed cases and four fatalities. The least affected statewide age group? School-aged kids under 18.

Is it the job of a district charter school office to regulate or to promote charter schools in its jurisdiction? Based on the contentious rollout last week by LAUSD of its Assembly Bill 1505 Community Focus Group Meetings, it appears to depend on who is doing the rolling. Designed by the district’s Charter Schools Division (CSD) “to help to shape the District’s policy” on implementing California’s new charter authorization reforms, the initial two meetings generated only exasperation. Incensed Local District East public school parents were kept in the dark until a parent-activist sounded the alert by publishing on her private Facebook page a recruitment letter by the California Charter Schools Association-sponsored organization Speak Up, which urged its members to attend as a lobbying opportunity to soften the implementation. Parents in Local District Northwest received robocall notifications regardless of whether they leaned charter or public. And it reportedly required an intervention by board member Jackie Goldberg’s office to get CSD to post the schedule on its web page. At the least the confusion suggests a suspect understanding by some local administrators of concepts like community or stakeholders, not to mention open public meeting laws. (A request to CSD for comment was unanswered by press time.)

Ironically, how participants defined a “community” turned out to be focus number one at a March 2 session. And the thoughtful albeit antithetical definitions volunteered by the opposing sides, one public school participant told Learning Curves, almost redeemed for her the CSD missteps. “It pointed to a diametric distinction: The public schools’ notion of a community assumes a value and identity that is distinct and worthy of support,” she observed. “Whereas for charters, a community is inherently diffuse and amorphous [because] they recruit from beyond just the surrounding neighborhood. And that [incompatibility] is exactly the kernel of the problem that everybody’s still tearing out their hair over.” The five remaining Assembly Bill 1505 Community Focus Groups have been postponed until further notice.

Don’t cry for me, El Cerrito. West Contra Costa Unified had reason for shedding tears. Namely, the February 26 decision by the WCCUSD school board to throw 300 school workers — including up to 230 teachers — under the yellow bus in a draconian, $22 million package of cuts. According to EdSource, the bloodletting will claim the jobs of 159 elementary school teachers and 72 social studies, English, phys ed, math, science, art, music and foreign language teachers. The hardest hit by the cuts? Kids at low-income West Contra Costa schools like Stege Elementary, which stands to lose greater numbers of their lower-seniority teachers along with their district-funded administrators. The cuts were prompted by a whopping $47.8 million deficit projected over the next two years that came to light only after May’s resignation of WCCUSD’s chief business officer. Blame a double-whammy of bookkeeping incompetence on top of pitiless austerity that, after 40 years, has turned East Bay schools into California public ed’s impoverished Proposition 13 poster child.