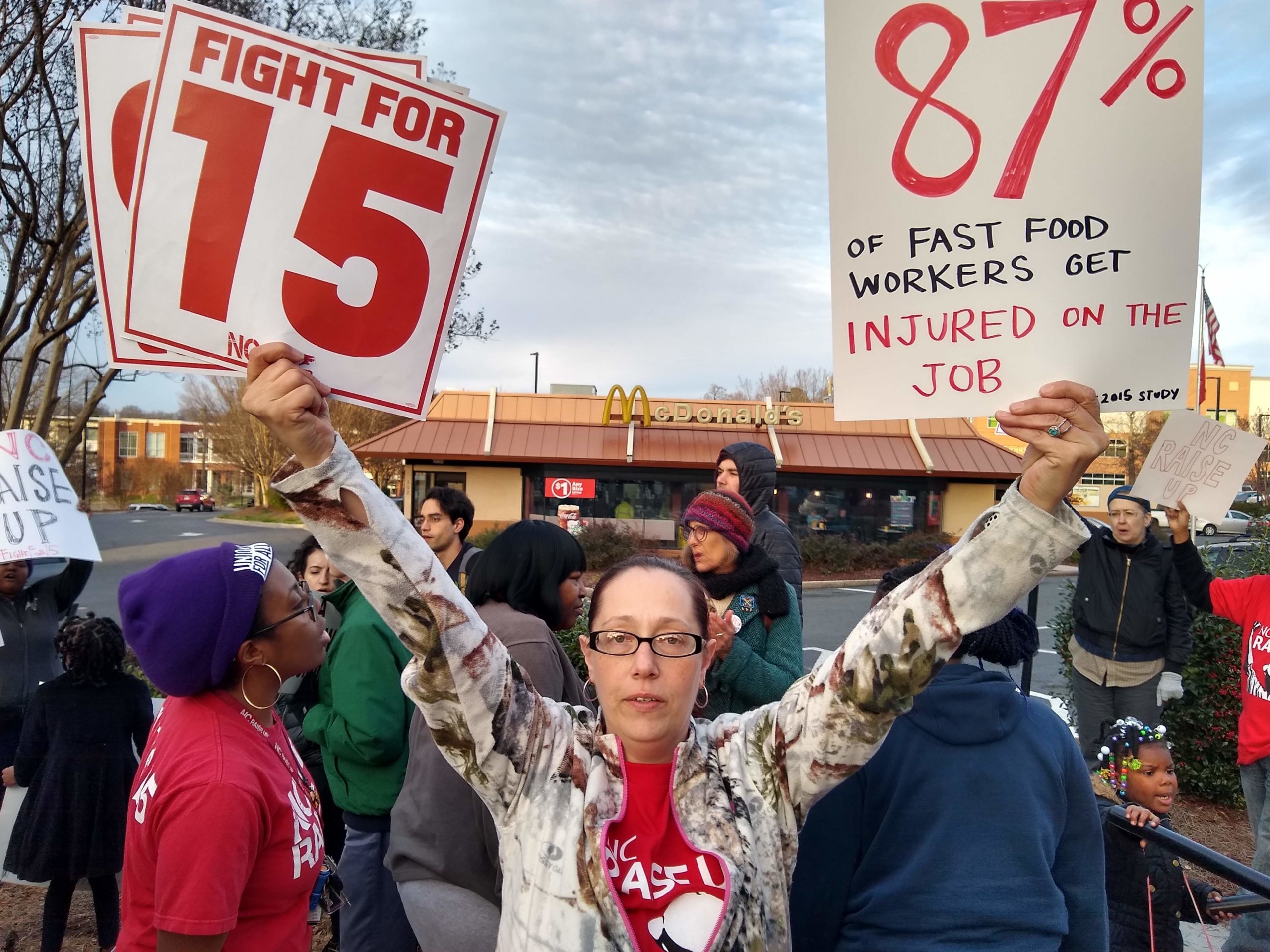 Sara Fearrington, a North Carolina waitress, joined the Fight for $15 campaign two years ago in the hopes of seeing a boost in her living standards. A server at a Durham Waffle House popular with Duke students, her take home pay fluctuates between $350 and $450 per week, leaving her struggling to pay bills every month. She voted for Joe Biden, who had pledged to increase the federal minimum wage to $15 per hour. It was the first time Fearrington, who is 44, had ever voted in a presidential election.

“It would mean everything. It would create stability for my household,” she said of the impact that a higher wage could have on her and her family of five, which includes her husband, who suffers from a rare lung condition, and a granddaughter who has asthma.

The Democrats will need her support for their U.S. Senate nominee next year if they are to maintain and strengthen their tenuous hold on the upper chamber. Some of 2022’s hotly contested Senate races are expected to play out in low wage regions like Fearrington’s home state.

The purple states of North Carolina, Pennsylvania and Wisconsin have rock bottom minimum wages of just $7.25 per hour — the current federal minimum wage. Georgia, where Senator Raphael Warnock will fight to hold on to the seat he wrested from Republican Senator Kelly Leoffler in November, abides by the federal minimum wage, even though the one it has on the books is $5.15. Recent polling suggests the GOP could gain a seat in New Hampshire, another low minimum wage state, where Democrat Sen. Maggie Hassan is facing a potential challenge from the state’s Republican governor, Chris Sununu.

The federal minimum wage has not increased from $7.25 since 2009, and for 21 states in the country the minimum wage law that governs employers is no higher than the federal minimum. Fearrington earns an hourly wage of just $3.10 per hour as a tipped worker, making her income unpredictable.

Biden had hoped to include a $15 per hour minimum wage increase in his $1.9 trillion economic stimulus package, which would also gradually phase out the subminimum wages for tipped workers like Fearrington. But prospects for its passage evaporated after the Senate parliamentarian ruled that the wage hike could not remain in the budget reconciliation bill — where Democrats had placed it in order to avoid a Republican-led filibuster they lacked the votes to override.

Delivering a minimum wage increase before the midterm elections would give bragging rights to Democratic senatorial candidates
in low minimum wage states.

Progressives inside and outside of Congress pressured Senate Democrats and the Biden administration to override the parliamentarian and take the matter to a vote. “Then, at least, it’s a public conversation, where people are fighting for what they said they were going to fight for, for the poor and low income people who turned out in record numbers in this past election,” said Reverend Liz Theoharis, co-chair of the National Poor People’s Campaign.

Whether such a conversation ever takes place is a growing concern to progressives and a source of discord within the coalition that brought Biden to the White House — at a moment when the battered U.S. economy stands at a crossroads. On Friday, Vermont Sen. Bernie Sanders made an eleventh hour effort to reinsert the provision into the stimulus package. Eight Democrats crossed over to vote it down, including two Senators from his neighboring state, New Hampshire.

Delivering a minimum wage increase before the midterm elections would give bragging rights to Democratic senatorial candidates in low minimum wage states. In North Carolina, 33% of workers would experience an increase in wages. Once the raise was fully implemented, the average annual benefit to a North Carolina worker who works year round would be $4,065, according to Capital & Main’s analysis of data released by the nonprofit Economic Policy Institute in a recent study. Workers in other states would reap similar benefits. 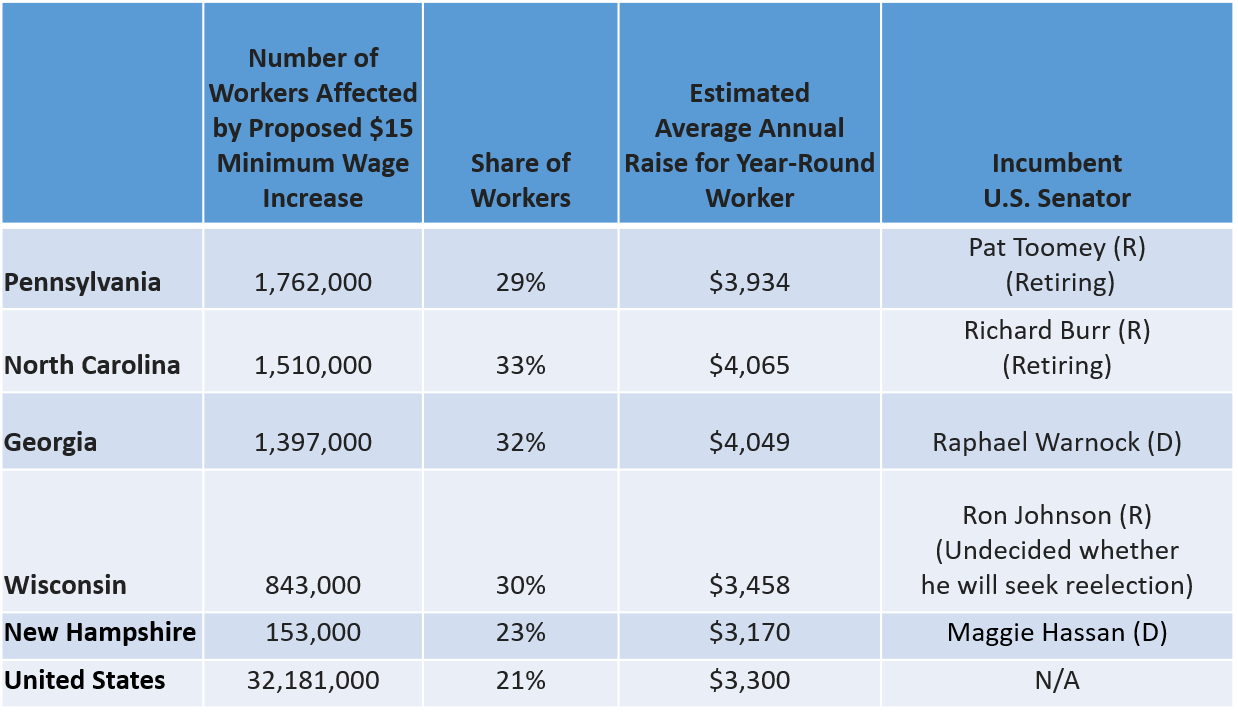 Source: Capital & Main analysis of data from Economic Policy Institute’s Jan. 28, 2021, report: The impact of raising the minimum wage to $15 by 2025 by congressional district.

Notes: EPI defines affected workers as those who would receive wage increases because they are directly affected (otherwise earning less than $15 per hour in 2025) or indirectly affected (earning just slightly above $15 in 2025).

EPI estimated the value of the annual raise using the following formula: (hourly wage increase after full implementation of the $15 wage hike) * (usual hours worked in a week) * 52 weeks. The proposed raise is to be phased in over five years.

Senate Parliamentarian Elizabeth MacDonough’s ruling prompted online protests by liberal swing state candidates in Pennsylvania, including Lt. Gov. John Fetterman, who is seeking the U.S. Senate seat occupied by retiring Republican Pat Toomey. “Since the Senate parliamentarian won’t allow a $15 minimum wage to go through reconciliation, then it’s time to end the filibuster and raise the minimum wage,” Fetterman said in a statement. Biden, who generally supports the traditions of the Senate, is coming under increasing pressure to end the filibuster in order to deliver on his agenda.

Delivering a minimum wage hike to voters — or at least fighting tooth and nail to get it passed — may also be key to keeping Biden’s fragile coalition together heading into the midterms. The failure to do so could also make for some fractious Democratic primaries. “Every single Dem who voted against a $15 minimum wage should be primaried,” said Krystal Ball, host of HillTV’s Rising, said of the Sanders’ amendment.

Polls show strong support for a $15 minimum wage, especially among Democrats and Independents.

“You’re not going to ask people like me, or any other union or community organizer, to go out and talk to working people and explain that the parliamentarian said that they can’t have a $15 per hour minimum wage,” said Peter Rickman, the executive director of MASH, the Milwaukee Area Service and Hospitality Workers Organization.

Rickman, a former co-chair for the Bernie Sanders presidential campaign, said that “no less than three” potential Wisconsin Senate candidates have asked him for advice even though the race to occupy the incumbent Republican Ron Johnson’s seat has yet to truly heat up.

“If they don’t frame the choice in the election as between one version of how to make the economy work and another, voters are not going to necessarily connect their policy preferences with an electoral choice,” Rickman.

“The reason we can’t get it done is because of a couple of centrist or right leaning Democrats.”

Polls show strong support for a $15 minimum wage, especially among Democrats and Independents. And a recent poll by the nonprofit National Employment Law Project found that two-thirds of voters in battleground congressional districts supported gradually raising the minimum wage to $15 per hour, including 84% of Biden voters and 63% of noncollege educated whites. Majorities in Republican held districts support the wage hike, even though most Republicans in those districts oppose an increase.

The popularity of a minimum wage increase led to Republicans floating watered down (and, mostly likely, doomed) proposals to hike the country’s base wage. Senator Mitt Romney (R-Utah) and Senator Tom Cotton (R-Ark.) proposed a plan to increase the minimum wage to $10 an hour over four years that is tied to stepped up immigration enforcement. On Friday, Senator Josh Hawley, Republican of Missouri, proposed a $15 per hour minimum wage plan that would apply to businesses with an annual revenue in excess of $1 billion. Taxpayers, not the employer, would foot the bill for Hawley’s proposed increase.

Opponents of the proposed gradual increase to $15 per hour over five years — like the Business Roundtable, which represents CEOs of major U.S. companies — have argued that wage increase should be calibrated to regional differences in the cost of living. But Ben Zipperer, an economist at the Economic Policy Institute, says $15 per hour makes sense as a wage floor and is even low when the cost of living is taken into account. In addition, the minimum wage would jump to $9.50 in the first year, well below its 1968 peak of just over $12 (when accounting for inflation).

“In 2021, virtually anywhere in the country, a single adult will need to be working at least full time and earn at least $16 an hour in order to meet their family budget,” says Zipperer.

Jim Wertz, chair of the Erie County Democratic Party in Pennsylvania, argues that the Senate’s failure to pass the $15 per hour minimum wage should push people to vote for more Democrats, not keep them from the polls. “The reason we can’t get it done is because of a couple of centrist or right leaning Democrats,” he said, referring to West Virginia Senator Joe Manchin and Arizona Senator Kyrsten Sinema who have said they do not support such a large increase in the minimum wage and today voted against Sen. Sanders’ failed attempt to restore the minimum wage hike to the stimulus bill.

Sara Fearrington is not paying close attention to the byzantine rules of Congress or its politics. She’d just finished an eight hour shift when we spoke. And it’s been a tumultuous year. She lost two members of her extended family to COVID-19. To protect vulnerable members of her family, she spent Christmas and her birthday in isolation after she contracted the virus. She returned to work in January and has had to hustle because of understaffing. “I noticed that it took a very big toll on my bronchial system,” she said of her bout with COVID. “Sometimes I’ll just be running and I feel like I can’t breathe.”

Still, she’s undeterred in her determination to vote in next year’s Senate race regardless of the outcome of this latest battle in D.C. Republican Sen. Richard Burr, who voted to convict former President Trump in his second impeachment trial, is retiring, leaving the seat open. “I’m going to go for the Senate seat that’s going to listen to the mass majority of people that are saying we need this to help our society, our community and our economy — blue or red,” says Fearrington.