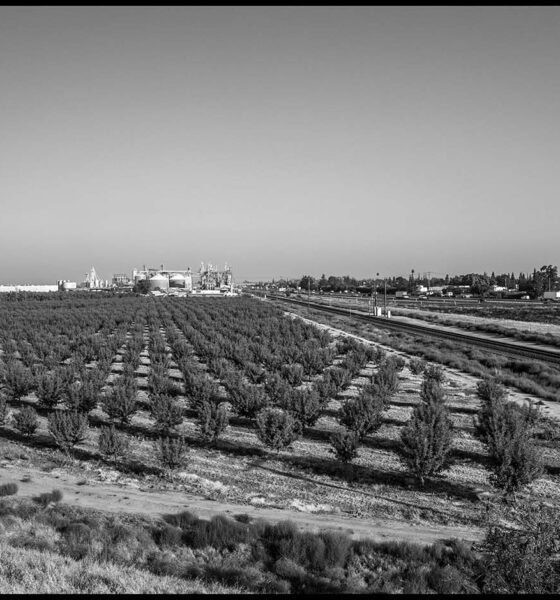 As the state grapples with ongoing drought and an array of drinking water pollutants, California’s most vulnerable residents have the biggest reason to worry.

An agro-industrial chemical plant in Stanislaus County, CA. All photos by David Bacon.

Francisco Diaz remembers when the water piped to his home in the Central Valley community of Monterey Park Tract made everything smell rotten, including himself.

“We had to take our clothes and go to the city and wash it over there because if you had washed it here and put it on, you’d stink,” said Diaz, who heads the Monterey Park Tract Community Service District, a form of specialized local government. “We couldn’t even take showers.”

Co-published by the Chico News & Review

Unsurprisingly, the water was undrinkable. Agricultural run-off, heavy in potentially toxic nitrates, had contaminated both wells that supplied water to Monterey Park Tract, nestled amid the crop fields and dairy farms of Stanislaus County. The small community of some 200 people had few options. And so about five years ago, it started sourcing its water from the City of Ceres, a suburb of Modesto about four miles away.

The switch in water source hasn’t come cheap for Monterey Park Tract, home to low-income families and retirees. Their monthly water bill, Diaz says, can be as high as $190 — depending on the family size — meaning they’re paying more than 300% the state average. But for all the money the residents fork out for their water, they still can’t drink it. The water piped from Ceres is contaminated with another toxic agricultural byproduct — 1,2,3-Trichloropropane (TCP), a probable carcinogenic solvent found in agricultural soil fumigants. Instead, the residents receive bottled drinking water trucked to them monthly, paid for with a grant. 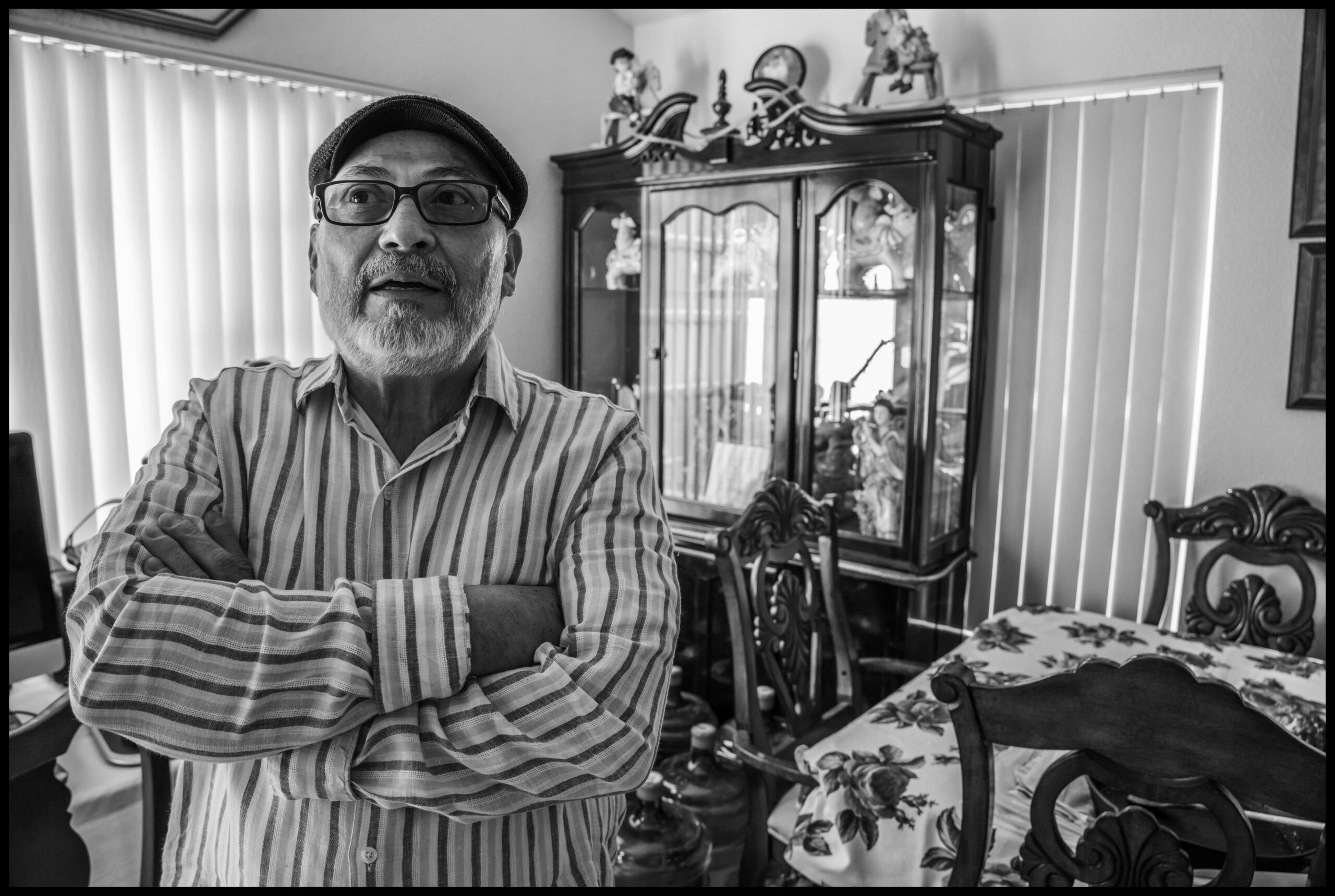 “Whatever price they raise it, we’ll have to pay,” said Diaz, worried that the cost from the treatment systems the City of Ceres is installing to remove the 1,2,3-TCP will push the community’s water bills even higher.

Stories like this are hardly an aberration in California. And as a drought exacerbated by climate change continues to inhale rivers, lakes and groundwater aquifers here in the West, the issue of environmental contamination will become ever more conspicuous.

Utilities and other water users are relying on groundwater more and more, stressing already depleted reserves. As scientists point out, lower groundwater tables lead to higher pollution concentrations. What’s more, drinking water standards in the state, though maligned by health and environmental experts for sometimes being too lax and slow to evolve, are still going to tighten in the years ahead to meet health goals.

It’s not just agricultural runoff that’s a problem. Among the contaminants casting a looming shadow over California’s legal mandate to work towards clean and affordable water for all is a cancer causing industrial pollutant, and a massive dynasty of chemicals with links to all sorts of health implications.

But treatment technologies don’t come cheap, and it’s typically smaller cash-strapped systems — those often in disadvantaged communities — that are most vulnerable to tainted wells. In 2019, 369 public water systems in California incurred one or more violations for high pollution levels or for an operational treatment defect. Over 91% of those were smaller utilities. Systems serving communities of color are four times as likely to have persistent water quality violations than those serving white communities. In all, some one million Californians don’t have access to safe, clean, affordable drinking water.

“The bottom line is that people can’t survive by drinking contaminated water,” said Andria Ventura, the legislative and policy director with Clean Water Action, an environmental advocacy nonprofit. But the state faces a “huge challenge” thanks to a mammoth funding deficit to address contaminated groundwater sites. “We can’t just treat our way out of these problems,” Ventura added. 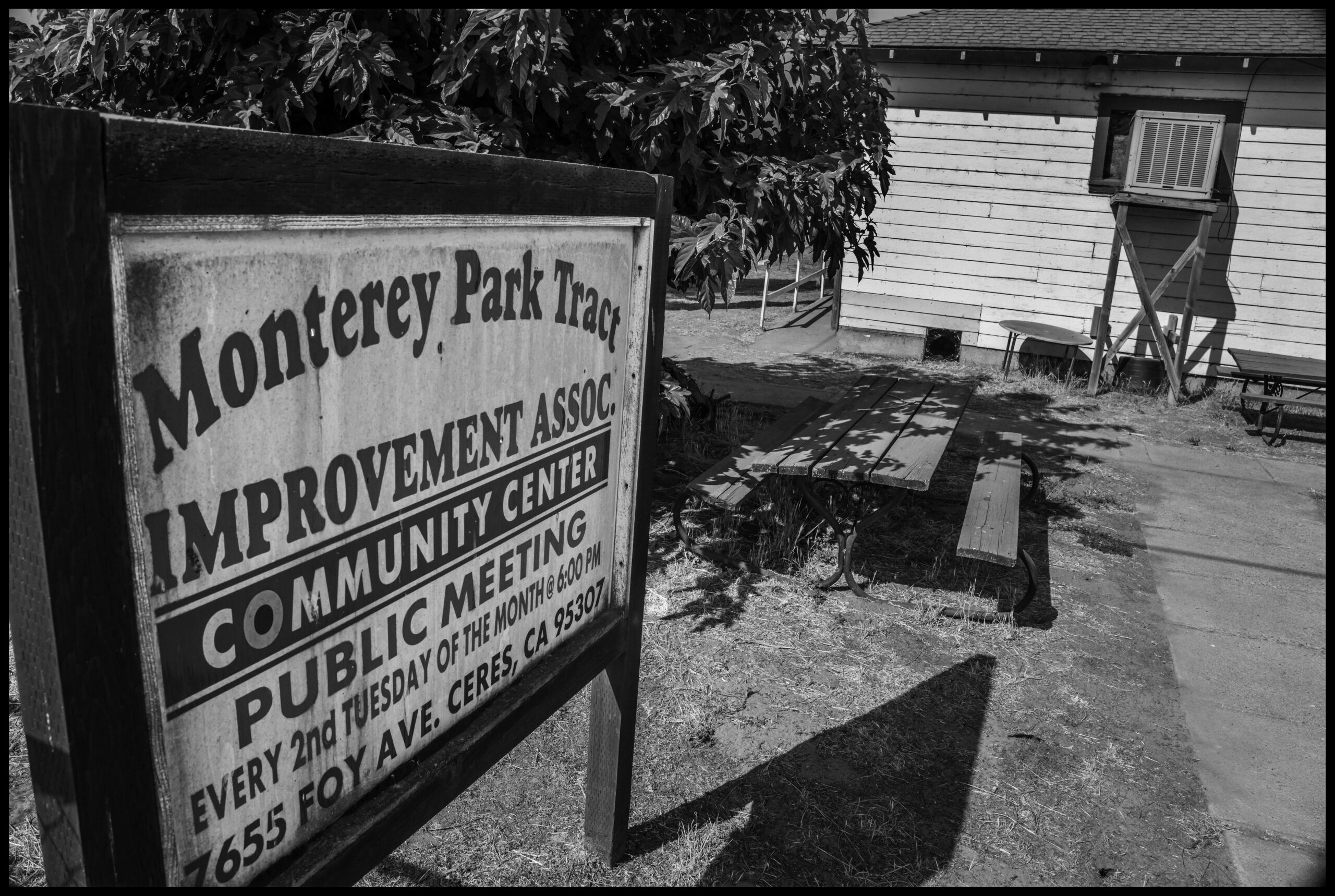 The community center in the Monterey Park Tract community. The 50 homes in Monterey Park Tract have to get water from the nearby city of Ceres because cattle waste and other agricultural run-off have polluted the aquifer that supplies the wells in the tract. Photo: David Bacon.

Ask drinking water officials in California what their biggest environmental challenge is besides the drought, chances are many will spit out a four-letter epithet: PFAS. This toxic, persistent and highly soluble family of Per- and Polyfluoroalkyl Substances headlined the recent Hollywood blockbuster, Dark Waters, about chemical manufacturer DuPont’s efforts to cover up the dangers these chemicals pose.

With more than 4,700 variants, PFAS are found in an array of everyday items like clothing, food packaging, carpeting and non-stick cookware. The two most common PFAS compounds — Perfluorooctanoic acid (PFOA) and Perfluorooctanesulfonic acid (PFOS) — have been phased out of the marketplace due to their toxic links to severe health problems like cancer, immunotoxicity and liver disease, and for the way they bioaccumulate in the body. Nevertheless, these two chemicals remain ubiquitous in the environment, as are a vast array of PFAS replacements, many of which are proving as harmful.

Officials have moved at a glacial pace to regulate just a handful of PFAS variants, but the screws are tightening. California’s drinking water response level — the recommended threshold to remove a contaminated well from use — is 10 ppt for PFOA and 40 ppt for PFOS. State regulators recently recommended a public health goal of 0.007 parts per trillion (ppt) for PFOA and 1 ppt for PFOS, which act as a guide for when a legally enforceable maximum contaminant level is nailed.

Rather than a piecemeal approach, however, many health experts argue that the whole family of PFAS should be regulated as a class. The evidence shows “very low exposures to the well-studied chemicals are associated with health effects,” said Amy Kyle, a research scientist and retired lecturer at the University of California, Berkeley Environmental Health Sciences department. “We’ve got to stop putting this out into the environment.”

PFAS aren’t the only drinking water dangers to be immortalized in celluloid. Hexavalent chromium, an industrial chemical widely used in things like electroplating and welding, was the poison allegedly killing the residents of Hinkley, California, in the true story told through the film, Erin Brockovich. This chemical has been linked to cancer, as well as liver and kidney damage.

Thirty years have passed since Brockovich began the process of helping to blow the lid off the Hinkley story, but hexavalent chromium — otherwise known as chromium-6 — is still making state headlines.

It took California regulators until 2014 to enact an enforceable maximum drinking water limit for hexavalent chromium — what was 10 parts per billion (ppb). Three years later, the Superior Court of Sacramento ordered the state water board to remove the limit and establish a new threshold, arguing that the agency had failed to properly gauge the economic impacts. While the water board is still moving towards that revised standard, “communities we work with are drinking water laced with chromium-6 as we speak,” warns Jonathan Nelson, policy director with the Community Water Center, a grassroots environmental non-profit. A hog raising facility in a farming area near the Monterey Park Tract community. Hog-raising operations are one of the industries responsible for water and air pollution in the area. Photo: David Bacon.

While hexavalent chromium is a highly prevalent industrial pollutant, in the parched rural heartland of California — areas of which are among the poorest in the nation — many key drinking water contaminants are associated with agricultural runoff, especially the growing problem of nitrate pollution, exposure to which can interfere with the body’s ability to carry oxygen. In rare cases, infants can die from what is called “blue baby syndrome.”

In 2019, 116 California public systems were in violation of the maximum nitrate level of 10 parts per million (ppm) in drinking water, according to the state water board. More than half had levels 1.5 times higher than the legal limit. More broadly, the Central Valley has been working to get a better handle on its nitrate problem through a program to rejuvenate impacted groundwater aquifers by reducing nitrate releases, and to make dischargers accountable for providing an estimated 100,000 impacted Central Valley residents with safe drinking water.

The program launched in May, but environmental advocates warn the roll-out has been frustratingly slow in terms of testing and distribution of clean water to impacted residents, with Nelson calling it “unacceptable.” In a separate program with overlapping intent, landowners and growers have been monitoring domestic drinking water wells on their lands for both nitrates and nitrites. As of last September, nearly 30% of the 7400 wells sampled exceeded state drinking water standards for these chemicals.

These select pollutants represent just the tip of the iceberg. A new water board website shows the vast scale at which military bases, oil and gas companies and industrial practices have tainted the state’s groundwater. Perchlorate — an endocrine disrupter widely used in the manufacturing of munitions — is one of the most prolific. This chemical alone has been detected in drinking water wells at or above its regulated level in nearly 20,000 samples taken between 2010 and 2020.

What’s the main problem facing polluted water systems? Cost. This is where many larger drinking water utilities enjoy significant advantages over their smaller cousins. If a drinking water well is contaminated, for example, larger systems typically have greater flexibility to shut it down, or dilute it with another water source.

Nor is it cheap to filter out toxic chemicals. In the case of the entire PFAS family, there’s no one-size fits all treatment system, and the costs of tackling this stuff can be astronomical. Just look at the Orange County Water District, heavily impacted by PFAS contamination. The treatment costs to the water district over 30 years is pinned at a minimum $1 billion. The cost alone of purchasing clean imported water has been estimated to raise monthly water bills by $20 among its 2.5 million residents. Nevertheless, smaller systems serving vulnerable communities simply don’t have the same economies of scale. Bettie Yelder is a board member of the Monterey Park Tract Water District. Photo: David Bacon.

After the state lowered in 2008 the maximum drinking water limit for arsenic, the City of Firebaugh, a largely low-income community of about 8,000 some 40 miles west of Fresno, had to install an expensive treatment system to remove the chemical, found naturally in the groundwater there. The costs of a $4 million loan for the system fell to the rate-payers, said Ben Gallegos, Firebaugh’s public works director. When the state tightens regulations, “they don’t realize what it does to a city like ours,” he said.

Jessi Snyder, community development specialist with Self-Help Enterprises, a non-profit geared towards low-income communities, agrees that, “It’s not fair to put that entire burden” on small systems. But the problem isn’t stricter regulations, which are needed to ensure that “all Californians have access” to quality water, she said. Rather, there’s a lack of adequate technical and financial assistance available to these communities. “In one way or another, we need to step up to support these small water systems,” she said.

The state does offer various funds to problem utilities. In 2019, California launched the Safe and Affordable Funding for Equity and Resilience (SAFER) program, which provides $130 million annually for systems in disadvantaged communities struggling with health-related compliance issues. While the program has been slow to roll out, Gov. Newsom has just signed a state bill that should help to expedite the process. Nevertheless, these assistance programs are primarily geared towards regulated contaminants, meaning that cash-strapped utilities bedevilled by unregulated contaminants like PFAS are left grasping at straws. Nor are these various pots of money enough for the problem at hand. 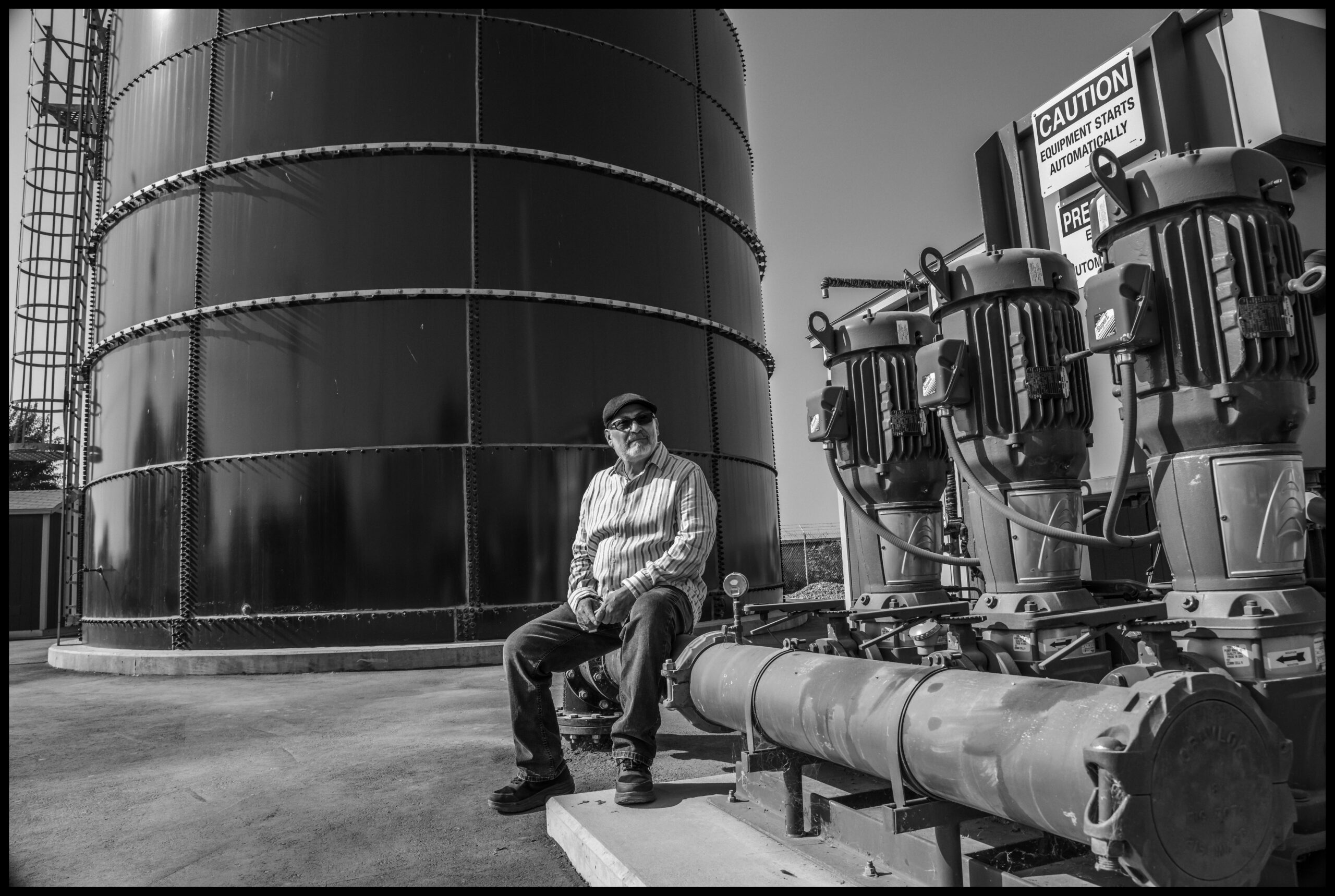 There’s a projected $4.7 billion funding gap over the next five years to bring just the state’s most at-risk small water systems up to code, and water improvement packages earmarked within the state’s latest budget — along with the federal government’s proposed $1 trillion infrastructure bill — don’t go far enough to fill that financial hole, say experts.

In an ideal world, the small community of Monterey Park Tract would still be producing their own water, says Francisco Diaz. “It would be cheaper for us,” he said. But the nitrate contamination in that area remains pervasive, he adds. “It hasn’t gone.”