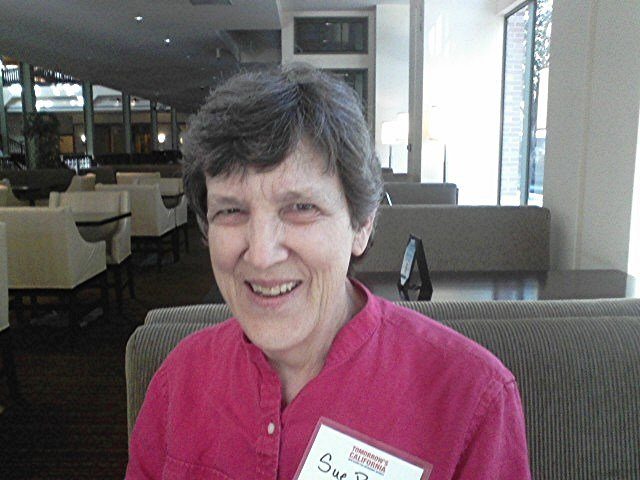 Sue Poucher, 64, is a Navy veteran from Michigan who joined the paid workforce at age 18, and left it in April 2014, due to a lack of job openings in her field, retail sales. She was one of 200 people who attended a daylong conference in Sacramento Oct. 15. The gathering, called “Tomorrow’s California: New Visions for Retirement Security,” focused on the release of a new report on aging, economics, public resources and policy solutions.

“I get Cal-Fresh, live in U.S. Housing and Urban Development subsidized senior housing and rely solely on my $943 monthly Social Security check,” Poucher told Capital & Main at the conference. “When food prices go up, what are you supposed to do, not eat?”

The Sacramento resident has no savings to fall back on, nor other sources of income besides Social Security. She is like a majority of California seniors, as researchers Nina Ebner, Ph.D., of the University of British Columbia and Nari Rhee, Ph.D., of the University of California, Berkeley Labor Center, explain in their report, Aging California’s Retirement Crisis: State and Local Indicators.

Making the invisible situation of aging more visible is the thrust of Ebner and Rhee’s report, which fleshes out the interlocking data of the retirement crisis.

“Less than half (44 percent) of California seniors age 60 and older have any type of retirement income,” they write, noting how the demographics of the emerging senior population reflect California’s shift to a minority-majority state.

“California’s seniors are already struggling to meet basic needs,” Ebner and Rhee write, “and a large majority of the elderly population in 2035 will consist of groups that are already economically vulnerable: the oldest seniors, older women and seniors of color. Older women are more likely to be poor than older men.”

The economy is officially out of recession, but that does not mean all are prospering. In fact, things are not so good for the state’s aging population.

“We all know the population is aging and the baby boomers [born between 1946 and 1964] are retiring,” Rhee, the manager of the retirement security program at U.C. Berkeley’s Labor Center, told Capital & Main. “What is specific to California by 2035 is that the fastest growing segment of the senior population will be age 80 and older, when people have typically spent down their assets, and will be under-resourced and needing care and supportive services.”

Less than half of California seniors age 60 and older have any type of retirement income.

Ebner and Rhee therefore call for higher pay for the state’s in-home care workers, along with an increase in the supply of affordable elderly housing. Rhee outlined further policy solutions to the crisis of retirement, with shoring up the finances of Social Security being key.

One fix is to increase the current limit on the maximum amount of taxable earnings subject to the Social Security payroll tax — $118,500 in 2015 — to a higher amount. That would generate more revenue for Social Security from “the top one percent of households [that] captured roughly 76 percent of inflation-adjusted income gains between 2009 and 2013,” according to an issue brief by the Center for American Progress.

Strengthening private-sector retirement plans is also critical, according to Rhee. As her and Ebner’s report details, private-sector employers have by and large eliminated defined-benefit pensions for their workforces. Nearly two-thirds of California’s private-sector workers, 6.3 million employees, lack employer-sponsored retirement plans, versus the 57 percent who have them nationwide.

That grim feature of employment, combined with the Great Recession and the wage stagnation that preceded it, has left 28 percent of California seniors age 65 and older with “incomes that are below the estimated amounts required to meet their basic needs,” Ebner and Rhee write. Seniors living in the Central Valley and Los Angeles regions are even worse off, with 31 percent of them lacking the financial means for self-sufficiency.

The loss of secure retirements has been a national trend, but California is one of the few states stepping up with progressive solutions.

Currently, studies are underway to determine the legal and practical feasibility of implementing such a new retirement savings plan, e.g., its benefit payments, employer costs and investor demand. In addition, full implementation of SB 1234 requires passage through the California legislative process in 2016, Yvonne Walker, president of Service Employees International Union 1000, told Capital & Main. “We are all committed to make sure that Californians don’t retire into poverty or work until they die.”

“Retirement security is a resolvable issue,” said Chet P. Hewitt, president and CEO of the Sierra Health Foundation, which, with SEIU 1000 and AARP, co-sponsored the Oct. 15 conference. “We have to get to work to resolve it.”