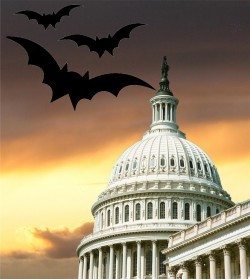 Before January 2009, the filibuster was used only for measures and nominations on which the minority party in the Senate had their strongest objections. Since then, Senate Republicans have filibustered almost everything, betting that voters will blame Democrats for the dysfunction in Congress as much as they blame the GOP.

So far the bet is paying off because the press has failed to call out the GOP – which is now preventing votes on the President’s choices for three D.C. Circuit Court nominees, the Labor Department and the EPA, the Consumer Finance Protection Bureau, and the National Labor Relations Board. (The GOP has blocked all labor board nominees, some to whom the President gave recess appointments, but he’s now asking approval for all.)

The GOP has already violated hundreds of years of Senate precedent by filibustering the nomination of a Cabinet secretary, Chuck Hagel for Secretary of Defense, and using the filibuster to delay John Brennan’s nomination as CIA Director.

Harry Reid may now be able to summon 51 votes to abolish the filibuster, at least for cabinet officials and other high-level policy makers. But that shouldn’t be considered a victory. It’s a sad commentary on where we’ve come to.

When I was in the cabinet I worked closely with several great Republican senators, such as Mark Hatfield of Oregon and Nancy Kassebaum of Kansas, who were willing to compromise, and who cared more about preserving the institutions of government than getting their way. Even Orrin Hatch and John McCain in those days were more concerned about the institutional integrity of the U.S. government than about any particular policy difference they may have had with the other side.

But the new breed – Rand Paul, Ted Cruz, Mike Lee, Sam Brownback, Jeff Sessions, David Vitter, to name a few – don’t give a rat’s ass about how or whether our government functions. In fact, they give every indication that they’d rather it didn’t.

I can’t help wondering why is it that Republicans who do want our governing institutions and processes to remain strong don’t stand up to the fanatics? What happened to Hatch and McCain, or to Lamar Alexander, Susan Collins and Lindsay Graham? Are they so frightened of losing to a fanatic in the next primary that they’ve been silenced into submission? Why don’t former Republican senators who lost to the fanatics, such as Indiana’s Richard Lugar, speak up?

As has been noted many times in history, it is not so much the viciousness or carelessness of the bad people but the silence of the good people that brings societies to the brink, or beyond.