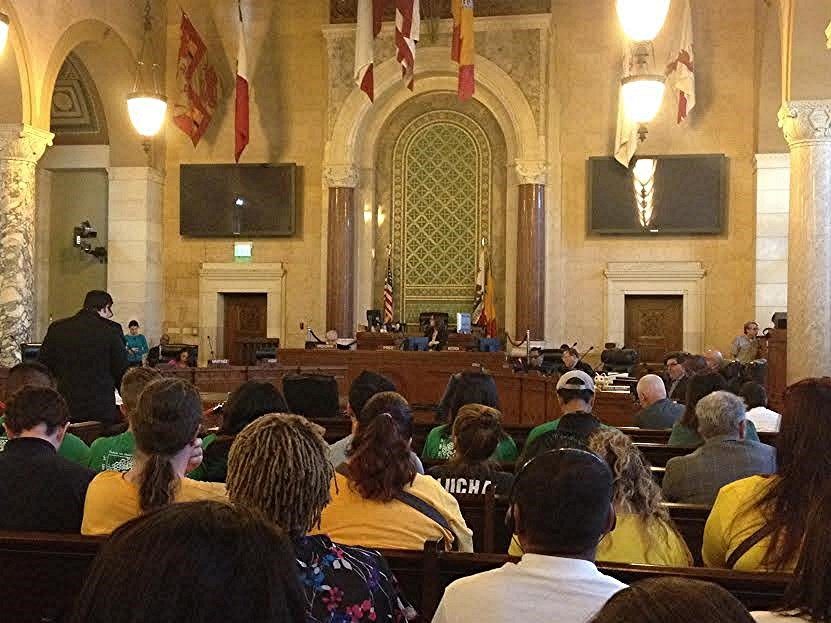 Los Angeles City Council members convened Tuesday for an Economic Development Committee hearing on a motion that would raise the minimum wage for workers in the City of Los Angeles to $13.25 per hour beginning in July 2017, and link future wage hikes to the Consumer Price Index. The motion also calls for an independent study on the economic impact of raising the minimum wage to $15.25 per hour after 2017. Councilmembers further discussed a closely related motion that would focus on the challenge of implementing and enforcing the new wage laws.

Supporters from a variety of local community and labor organizations, each wearing different colored T-shirts, showed up to back the wage increase, including from the Koreatown Immigrant Workers Alliance (KIWA), Alliance of Californians for Community Empowerment (ACCE), L.A. Black Workers Center and Restaurant Opportunities Center Los Angeles (ROC-LA), among others. The hearing, which came just a month after Council members voted to raise the minimum wage to $15.37 for certain hotel workers, was initiated by Mayor Eric Garcetti and is part of a growing movement to address income inequality in Los Angeles.

“A lot of workers don’t earn enough to live in Los Angeles with a minimum standard of living,” Daniel Flaming, President of the Economic Roundtable told Capital & Main. “Nearly every social problem we see is driven by inadequate family income,” he said.

After the motions were introduced, Councilmember Curren Price opened the floor for public comment. Advocates for the wage increase spoke of L.A.’s high cost of living, the economic benefits of giving consumers a boost and the difficulty of surviving on today’s minimum wage. Dante Atkins, Co-Chair of the Los Angeles County Democratic Party’s Legislative Committee, said implementing the wage increase would “strengthen the local economy and strengthen the individual’s buying power.”

In addition to workers and community leaders, several members of the business community spoke out in favor of the wage increase. Kevin Litwin, Senior Vice President of Joe’s Parking stated, “We wholeheartedly want to pay our employees more. We can only accomplish this if everyone participates.”

Opponents of the wage increase lined up to voice their opinions as well. Many critics of the motion spoke favorably of a higher minimum wage, but urged the city to delay action and conduct more studies. John Howland of the Central City Association commended the goal of reducing poverty, but ultimately spoke against the wage hike, stating that the ordinance would hurt business and job growth. “These negative impacts will fall particularly hard on small businesses, the backbone of L.A.’s economy,” he said. Andy Hasroun, President of the Atwater Village Chamber of Commerce, warned that the wage increase would “result in small businesses moving down the street to neighboring cities such as Burbank and Glendale.”

Some speakers emphasized the importance of such related issues as paid sick days and protection against wage theft. “If the minimum wage goes up to thirteen, fifteen, twenty or one hundred, it will not mean anything for workers if there is no enforcement,” said Alexandra Suh of KIWA.

City Council members concluded the session with words of support for the wage increase as well as a decision to conduct further research into the matter. While Councilmember Gil Cedillo raised questions about how small businesses and nonprofits fit into the plan, Councilmember Nury Martinez suggested reaching out to local academic institutions for help gathering data. However, Councilmember Paul Krekorian best summarized the City Council’s attitude toward the minimum wage increase when he referred to an “extremely wide consensus that there is a need to address wage inequality in this city.”

Full disclosure: The reporter has done a small amount of volunteer work in the past with ACCE and ROC-L.A.

The Dixon Family Chronicles: “Early in the Morning”