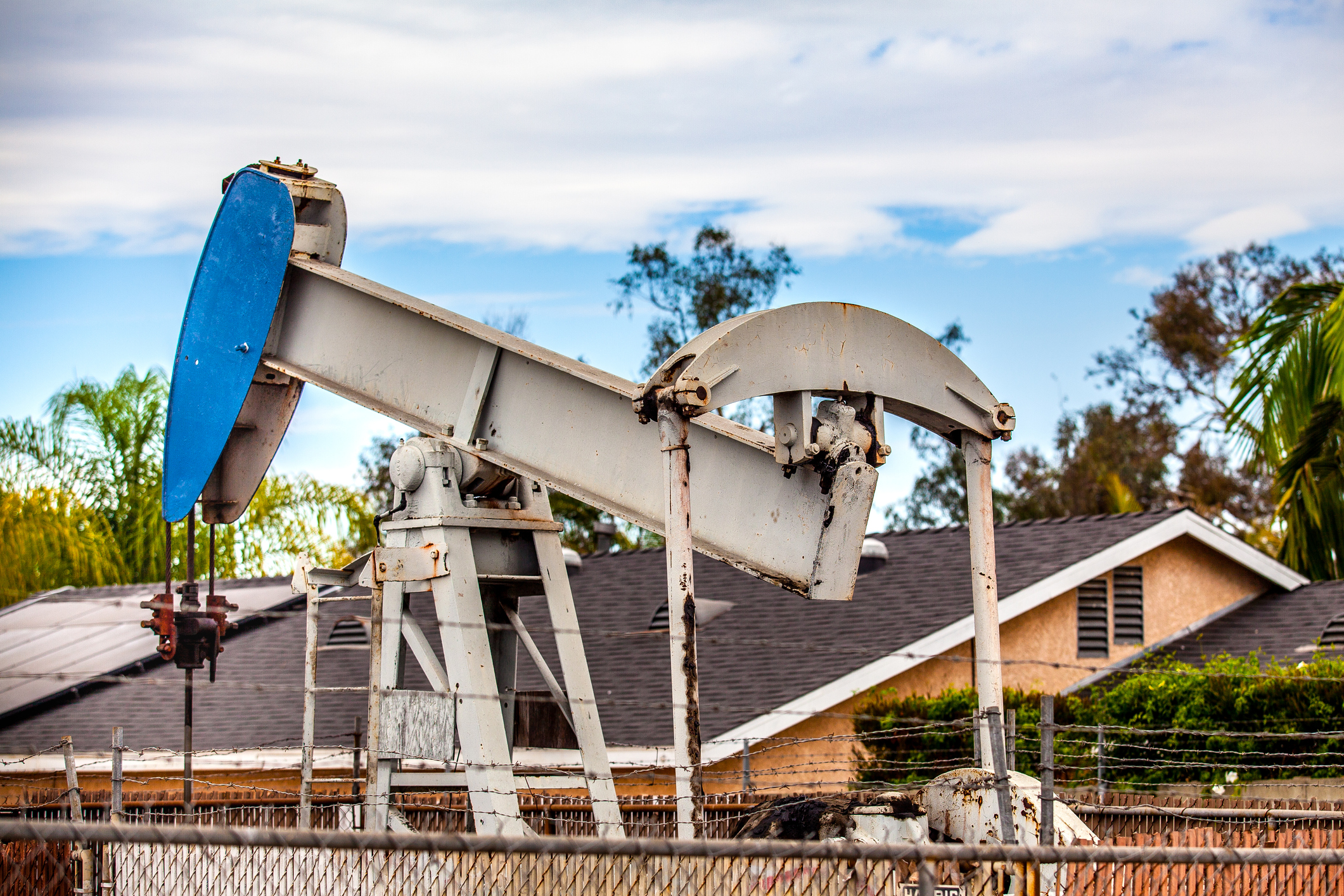 An oil pumpjack overlooking the backyards of nearby homes in Long Beach, California. Photo: Gary Kavanagh.

Update: SB 1137 passed the Assembly Tuesday night and the Senate on Wednesday. The governor is expected to sign the bill.

As key planks of Gov. Newsom’s climate and environmental justice package come together in the final hours of California’s legislative session, a bill to create health buffer zones between toxic oil and gas wells and homes, schools, and health centers is proving to be the most contentious part of ongoing negotiations.

An alliance between state oil producers and trade unions that represent thousands of workers in California’s oil and gas industry, now threatens to torpedo the bill, SB 1137. It will reportedly go to the Assembly floor for a vote late Tuesday. If it passes, it will likely go to the Senate for a concurrence vote Wednesday.

Millions of Californians live near oil wells, which are associated with serious health hazards. After years of failed attempts, a bill written last week would ban new wells within a half mile of sensitive sites and mandate protective measures for people living near active wells in that zone. Black, Latinx and low income residents disproportionately live near wells.

The Newsom administration proposed a rule last year to institute a similar health measure but in August announced its support for a legislative version.

On Monday at a hearing of the Assembly Natural Resources Committee, representatives from the State Building and Construction Trades Council and Los Angeles County Federation of Labor criticized the bill as a job killer. Dozens more representatives for oil and gas companies and trades unions testified against it. Many have expressed doubt about the state’s ability to find new clean jobs for displaced oil workers, and a just transition framework is still more theory than reality.

Capital & Main previously reported on how political alliances between trade unions and the oil and gas industry became a potent force for limiting regulations on the industry.

A coalition of climate and environmental justice groups are targeting on-the-fence Democrats in the Assembly to lobby for the bill. But opposition from trade unions has proven to be a death sentence for similar legislation in the past.

Sources say bill supporters are working to identify Assembly Democrats who could be swing votes, including Asm. Cottie Petrie-Norris (D-Irvine) and Asm. Mike Gipson (D-Carson). Both have taken nearly $800,000 each from trade unions during their tenures, and Gipson has taken $218,980 from the oil and gas industry.

A spokesperson for Gipson said he wasn’t actively working to oppose the legislation, and said he didn’t know how Gipson plans to vote.

“We haven’t really talked about this one,” said E.J. Aguayo, Gipson’s legislative director.

A representative for Petrie-Norris said she is evaluating the bill and doesn’t have a formal position.

The bill’s supporters are also examining the record of Democratic Assemblymembers who this morning unsuccessfully opposed SB 1314, a bill banning oil companies from using captured carbon dioxide to pump more oil out of the ground, as a sign they may oppose the setbacks bill. Environmentalists and climate groups supported it because they don’t want companies to use captured carbon for more oil production, which is what most of it is currently used for at capture facilities outside California.

On other parts of Newsom’s package, however, divisions between labor and oil are showing.

SB 905, which would create a regulatory framework for carbon capture and storage technology, is opposed by oil producers but has support from the California State Pipetrades Council and SoCalGas. Along with SB 1314, which passed the Assembly Tuesday morning and is heading for Newsom’s desk, it prevents companies from using captured carbon to pump more oil out of the ground. The Western States Petroleum Association is opposing SB 905, according to spokesperson Kevin Slagle.

Meanwhile, a bill supporting targets for a clean electric grid (SB 1020) is also heading to the governor’s desk after successful passage in the Senate Tuesday. The bill directs regulators to work together on prioritizing an emissions-free grid over the next 23 years. Newsom is expected to approve it.

Two more bills accelerating California’s emissions reduction goals are up for final votes. AB 2133 boosts reductions by 2030 from 40% to 55% of 1990 levels. AB 1279, which won’t get a final vote until Wednesday afternoon, mandates carbon neutrality by 2045 while requiring the state to identify goals for carbon removal and capture. Both bills are also opposed by oil companies and trade unions.

Another, AB 1757, sets goals for sequestering carbon by preserving natural landscapes and is expected to pass the Senate floor and go to the governor’s desk by end of day Wednesday, sources say.

This story has been updated to reflect the final vote count on SB 1137.