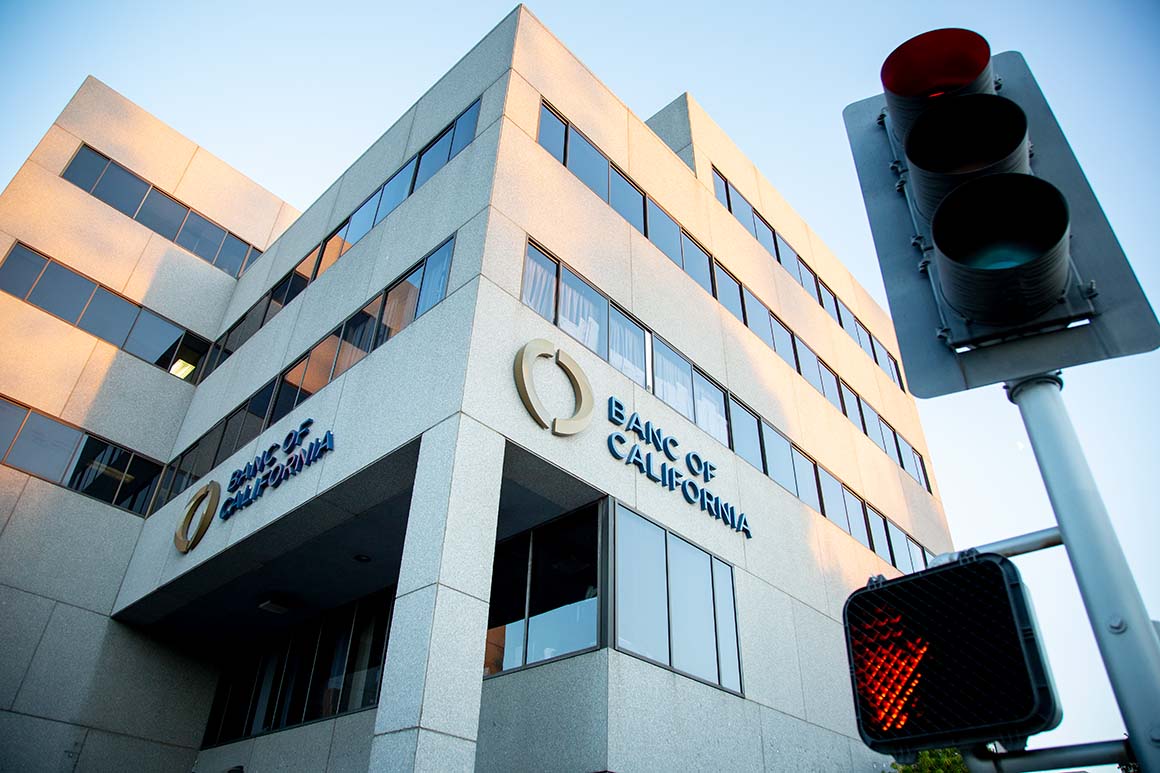 The Banc of California in Pasadena. Photo: Pandora Young.

Every time Cecilia Blake’s upstairs neighbor uses the garbage disposal, Blake knows it because “stuff comes down in my sink.” The pipes in her South Los Angeles apartment are chronically leaky, so in a never-ending game of whack-a-mole, no sooner is one leak patched than another appears. And because of a persistent rodent problem and a broken screen, Blake says she thinks twice about opening the door to let cool air in on a hot September day. “You’re scared if you do that, the mice are going to run in here.”

Blake, a special education teacher’s aide who also works a second job as a security guard, doesn’t think she can find much better housing in the tight L.A. market.

Her landlord, Ram K. Mittal, owns more than 200 buildings under more than 20 companies he controls. Most of the buildings are in South L.A. and surrounding cities. Rats, roaches, mold and leaky pipes are among the more than 450 health and safety violations for which Mittal’s buildings have been cited in Los Angeles County alone between September 2017 and March 2020.

In a written statement, Mittal’s staff at Swami International denied that the buildings operated by his 40-year-old business suffer from neglect: “We receive no benefit from failing to maintain an asset. Rather, it is in our best interest to keep our buildings clean, sanitary, habitable and safe.”

Now, activists in California and New York say the banks that make loans to “problematic landlords” like Mittal should hold them accountable for slum conditions or unfair evictions.

The California Reinvestment Coalition and the Greenlining Institute, both based in the Bay Area and both comprised of hundreds of member housing equity groups and nonprofit lenders and housing developers, argue that financial institutions should play a larger role in addressing the state’s glaring affordable housing needs. One way is by funding affordable housing.

Cecilia Blake says she thinks twice about opening the door to her South Los Angeles apartment to let cool air in on a hot September day. “You’re scared if you do that, the mice are going to run in here.”

Another way is to engage banks in an effort to make sure that landlords to whom they loan money deal fairly and responsibly with tenants.

It is a new strategy that is still untried in California.

Two New York banks — Signature Bank and New York Community Bank — were the first in the country to sign on to a set of best lending practices. Signature, for instance, says it discourages lending that is likely to lead to tenant displacement as well as to landlords with “inadequate building and tenant management practices.”

CRC and Greenlining hoped to achieve a similar first for California with a newly inked community benefits package the groups negotiated this month with Banc of California. But the bank, which has loaned Mittal at least $14.7 million in the past three years — and which CRC and Greenlining said extended credit to seven other landlords the groups deemed “problematic” — balked at committing to hold its borrowers to CRC and Greenlining’s anti-displacement code of conduct for lenders, which includes ensuring landlords comply with tenant protections and checking in with tenants on habitability and other concerns.

The bank did, however, agree to a five-year, more than $1.5 billion community benefits package that includes investments in economic development and a $200 million affordable housing commitment that would result in several hundred units guaranteed by deed restrictions to remain low cost for the long term. Advocates consider such housing, which is subsidized and generally better maintained than other apartments at the lower end of the rental market, a good solution. But there is simply not enough to go around, and most low income workers like Cecilia Blake depend on the private market.

Bank officials didn’t respond to requests for comment on the agreement or about its borrowers and policies, but the press statement released in early October by the California Reinvestment Coalition included a statement from John Sotoodeh, Banc of California’s chief operating officer.

“Banc of California has a record of strong CRA performance and a commitment to serving communities throughout Southern California as reflected in our most recent CRA exam,” Sotoodeh said in the statement. “We remain committed to continuing and improving upon this record.”

In return, Greenlining and the CRC agreed to withdraw their opposition to the bank’s acquisition of Pacific Mercantile Bancorp, easing the way for regulatory approval.

The agreement came after CRC and Greenlining had urged federal regulators to deny the Santa Ana-based Banc of California approval to acquire Pacific Mercantile Bancorp unless the bank both used its leverage to convince its borrowers to treat tenants better and provided low and moderate income communities better services.

They argued the Banc of California had fallen short in extending credit to lower income neighborhoods and therefore didn’t comply with the Community Reinvestment Act — a 1970s-era anti-redlining law that regulators must consider before approving a bank expansion.

As evidence, CRC and Greenlining cited bank branch closures in lower income communities and high overdraft fees. They also noted that in 2019, the bank had done virtually all of its home mortgage lending — nearly 96% — in upper income neighborhoods.

Jaime Weisberg of the Association of Neighborhood and Housing Development says the power of best lending practice commitments lies in the fact that if you are a landlord, “You don’t want to get a call from your lender — that’s the last thing you want.”

They aimed some of their sharpest criticism, however, at the bank’s loans to eight “problematic landlords” including Mittal. Collectively, seven of them racked up more than 2,400 health and building code violations from the L.A. County Department of Public Health alone, according to CRC and Greenlining. The groups asked regulators to investigate whether such loans fueled “housing insecurity, uninhabitable living conditions, or damaged credit” for tenants who may have been evicted unfairly.

The bank replied to regulators that it had scored a “satisfactory” rating in its most recent 2018 Community Reinvestment Act evaluation and was committed to serving low income communities. It countered that CRC and Greenlining “cherry-picked” issues to advance their own policy goals.

The bank finally agreed to negotiate with the groups in early September. Greenlining’s Rawan Elhalaby recalls getting a phone call from a bank executive: “I think we can do a deal,” he said. Then came nights and weekends reviewing proposals until the two sides reached an agreement.

CRC’s deputy director, Kevin Stein, says he’s encouraged that further talks with the bank could bring the two sides closer on the question of holding landlords accountable. “Now, we have a relationship and can get them there. We think the bank will listen,” Stein says.

Meanwhile, Jaime Weisberg, senior campaign analyst with the Association of Neighborhood and Housing Development in New York City, who works with tenants to enforce Signature Bank’s commitment, says its power lies in the fact that if you are a landlord, “You don’t want to get a call from your lender — that’s the last thing you want.”

Tenants in a Bronx building recently got Signature Bank to make that call. They conducted a virtual tour for the bank’s liaison in which tenants pointed to a broken door that led to drug dealing and prostitution, trash piling up and mouse and cockroach infestations.

Now, Weisberg says the tenants are waiting to see if enlisting the bank in convincing property owners works where other efforts have failed.

For now, Ram Mittal’s tenants don’t have that option. Some say their apartments are plagued with leaks and infested with mice and roaches despite hundreds of health and building code violations and even major lawsuits. Odilia Mateo, who lives in one of Mittal’s buildings in South Los Angeles, can’t lock her front door because the wood is rotten. As soon as she turns the lights off at night, the mice come out. “It seems like they’re having a party,” she says.

In 2019, Mittal agreed to a $1,675,000 settlement after a group of tenants in a building on 61st Street in South L.A.’s Florence-Firestone neighborhood alleged in court papers that a cockroach infestation was so severe that it caused them and their children “to inhale and ingest dead cockroach body parts, cockroach feces, cockroach urine and cockroach allergens.” Rats and mice infested the building too, they said, made worse by water leaks and chronic mold.

Mittal also agreed to pay an undisclosed sum in 2020 to settle a second lawsuit with tenants in a building on W. 206th St. in Torrance who claimed his company knowingly rented them bedbug-infested apartments.

In 2019, landlord Ram K. Mittal agreed to a $1,675,000 settlement after a group of South L.A. tenants alleged in court papers that a cockroach infestation was so severe that it caused them and their children “to inhale and ingest dead cockroach body parts.”

The two buildings named in the lawsuits weren’t used as collateral to secure Banc of California loans. But public records show Mittal borrowed at least $14.7 million from the bank in 2018 and 2019 alone, using 17 of his apartment buildings, including Cecilia Blake’s, as collateral.

Blake believes little if any of the $670,000 Mittal borrowed against her building was spent to improve it. Swami representatives countered that claim by saying that they “reinvest a healthy” and “more than adequate” portion of any proceeds from a loan into keeping their buildings in good repair.

“We consistently remind our residents that we need their cooperation and timely notification whenever a situation arises requiring attention,” the statement said. “We make the repairs as soon as we are aware of the need, and we do so using quality materials and services.”

Last spring, a pipe burst when workers attempted a repair in another apartment. Water seeped into Blake’s bedroom. The wall was soaked, gave way, and left a gaping hole in Blake’s apartment until it finally dried several days later and could be patched up.

The bank told federal regulators that it doesn’t knowingly originate loans on properties with outstanding code violations and that it reviews each loan annually to ensure borrowers comply with loan terms like keeping properties in good repair. It also argued that it performs a “negative news search” on all borrowers. It likely missed a Capital & Main report on Mittal’s Florence-Firestone tenants who eventually filed suit.

None of the 17 properties used as collateral to secure Mittal’s BOC loans were in violation of health codes on the dates the loans were made. But many, like Blake’s building, had received numerous citations before and after. L.A. County health inspectors cited one Mittal property with a Banc of California loan 32 times between 2017 and 2019.

Going forward, CRC and Greenlining may seek a similar agreement with one of the largest banks in the country, US Bank. It plans to acquire Union Bank, which has nearly 400 branches on the West Coast.

But ultimately, bank regulators need to bring their oversight muscle to bear on financial institutions that lend to problematic landlords, says Weisberg, whose organization helped negotiate deals with Signature Bank and New York Community Bank. “These agreements are great to have,” she says, “but the implementation is tough. And there’s not the regulatory oversight that requires it.”