California tenants are taking their grievances to local governments, to courtrooms
and to the ballot box.

The ad on Redfin’s website suggested a “wonderful” opportunity for an investor: a 25-unit building in a “NO RENT CONTROL AREA” of Los Angeles County. But it also obliquely warned of impending peril for the inhabitants: “[D]rive by only, tenants are unaware of the sale.”

On October 2016, the tenants of a complex on East 61st Street, in an unincorporated area of South Los Angeles County, received a letter informing them that the two-story stucco building, built in 1925, had a new owner. 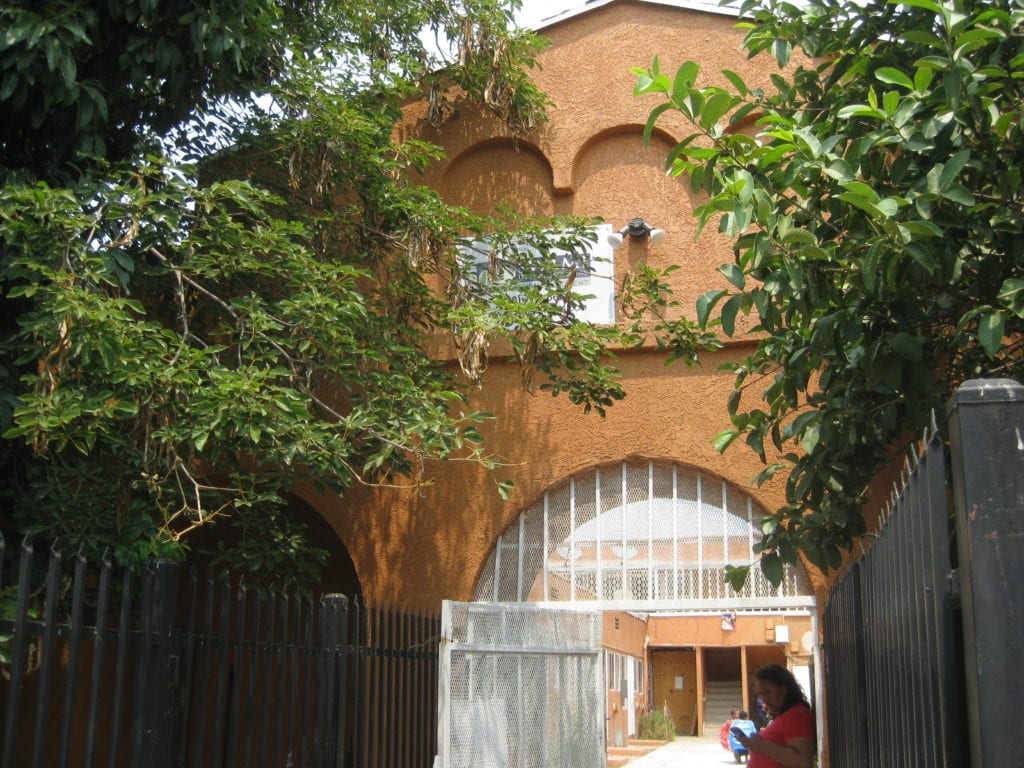 The entry to Nuñez’s apartment building.

What happened next suggests the lack of protections afforded the state’s low-income renters, particularly those residing in neglected and deteriorating housing. But the tenants’ response also highlights the emergence of a movement that is pushing back against rapacious landlords and a nationwide housing affordability crisis that cuts across income levels, but hits the country’s poorest residents hardest.

In California, tenants are taking their grievances to local governments, to courtrooms and, in November, to the ballot box, where voters will decide a controversial measure that could give municipalities more latitude to regulate rents.

Jose Nuñez, 62, was one of about a dozen tenants in the 61st St. building in Florence-Firestone—one of the county’s most densely populated neighborhoods—to receive an eviction notice, according to Silvia Marroquin, an organizer with Strategic Actions for a Just Economy (SAJE), a Los Angeles-based non-profit that is working with the tenants.

At one property, a desiccated rat was visible in the exposed laths of one of the building’s archways. Water dripped from the ceiling of an empty apartment that had been gutted.

Nuñez says he was puzzled to be given 60 days to vacate the apartment he has lived in with his wife, Juanita Rodriguez, for 20 years. “I was asking myself Why? because I always paid my rent on time,” he says.

Nuñez suspects that the building’s owner was unhappy that tenants had begun to demand repairs in response to being asked to pay for parking and utilities. “The owner shouldn’t have been so unfair with us. He should have come to us and let us know that he wanted to raise rents,” said Nuñez through an interpreter. He added that he would have kept quiet about repairs and agreed to modest rent increases.

Marroquin thinks the owner has other motives, as well: finding new tenants who will pay higher rents.

On a mid-August visit to the property, a desiccated rat was visible in the exposed laths of one of the building’s archways. Water dripped from the ceiling of an empty apartment that had been gutted. The unit’s former tenant, Monica Gomez, a 49-year-old seamstress, remembered being woken in the middle of the night more than a year ago by water dripping on her head. (She and her two sons have since moved out of the apartment and in with a friend.)

Los Angeles County has not had a rent control policy for its unincorporated areas since Ronald Reagan was president.

The building’s owner, 3 Peacocks, is a limited partnership with ties to Swami International, a 40-year-old property management company with which it shares the same address in the city of Gardena. As of September 2017, the building was being managed by Torrance-based Crystal Property Management, according to a letter sent to tenants.

A group of about 20 tenants plan to file a lawsuit in Los Angeles County Superior Court early this week and will name all three entities as defendants, according to Grant Riley, the tenants’ attorney, who claims the owner and property managers have been negligent in maintaining the building.

Monica Mittal, who works for Swami International and is listed as a signatory for the corporate general partner of 3 Peacocks LP, did not respond to a request for comment, nor did Crystal Property Management.

Several tenants have left in response to the eviction notice, but others – like Nuñez – have remained, turning down $1,500 if they agree to vacate the building by the end of July, according to Marroquin, who says it is not enough money to allow them to find housing in the area.

L.A. County supervisors are getting pressure from landlords, who argue that rent control will make the housing crisis worse by providing a disincentive for new investment in housing.

Jose Nuñez is in visible pain as he paces an immaculate room that holds the couple’s bed, couch and a folding table. He left his job at a plastics factory five years ago after injuring his back. He’s looked at apartments in the area and has been dismayed by rents that range from $1,000 to $1,200 per month. The $668 monthly rent he says he now pays eats up a sizable chunk of his $975 monthly disability payment.

But even as Nuñez gets ready to do battle in court, he has joined an effort to affect policy at the local level. His eyes light up as he shows me a hand-made sign. In Spanish, it reads, “Here in the County of L.A. Firestone and Florence: We want a stop to the high rents. Now!”

Stopping or slowing Los Angeles County’s rising rents will take some work.  The county has not had a rent control policy for its unincorporated areas since Ronald Reagan was president. But Los Angeles County Board of Supervisors members Sheila Kuehl and Hilda Solis moved the ball forward on rent regulation in May of last year, the same month that a group of tenants from gentrifying East Los Angeles marched to the board’s Kenneth Hahn Hall of Administration auditorium in support of rent control. The supervisors voted to establish a “Tenant Protection Working Group” of real estate professionals, tenant lawyers and social service providers, which has been meeting since early January to hammer out recommendations.

In its final report, dated August 15, the working group recommended by a 7 to 2 vote (with one abstention) that the county adopt a rent stabilization policy that would limit allowable rent increases for certain multifamily apartment buildings in unincorporated parts of the county. There are more than 93,000 rental units in unincorporated Los Angeles County, according to a report by the county’s chief executive office.

The working group also recommended the establishment of “Just Cause” eviction protections, which limit the reasons tenants can be evicted from their apartments. Such a policy would be most applicable to the predicament that the East 61st Street tenants now face, says Dagan Bayliss, SAJE’s organizing director.

If supervisors are feeling the heat from tenant groups in East and South Los Angeles, they are also getting pressure from landlords, who argue that rent control will make the housing crisis worse by providing a disincentive for new investment in housing. (Rent control proponents counter that there is no evidence that rent stabilization laws—which typically exempt new construction—have that effect.)

A sign of the landlords’ sway might be found in the board’s recent decision to delay a vote on an interim rent cap proposed by Kuehl and Solis. Concerned that rents were beginning to “spiral upward” while the working group met over a period of months, the two county supervisors had introduced a stop-gap motion in late June to direct staff to draft a six-month ordinance to limit rent hikes to three percent. That vote was scheduled for late July but never took place, to the disappointment of East 61st Street tenants who staged a brief protest in the supervisors’ auditorium. The California Apartment Association had put out a call to action on its website in late June to rally opposition to the proposal.

When asked in mid-August about the temporary rent cap, supervisor Mark Ridley-Thomas, who represents the Florence-Firestone neighborhood, told Capital & Main in an email that, while he understood “the pressures are particularly acute for tenants,” he “would like the opportunity to be informed by the working group’s perspective before taking up any elements of this agenda.” Board meetings will resume after Labor Day.

This local activity is part of a larger battle swirling around a state ballot measure, Proposition 10, which would repeal the Costa-Hawkins Act, a 23-year-old law that restricts rent control policies from being applied to buildings constructed after 1995, and to multifamily dwellings.

That ballot initiative has also drawn opposition from real estate interests, which have raised more than $20 million to defeat the measure, and more than $12 million in support — the vast majority from the AIDS Healthcare Foundation.

Not all the East 61st Street tenants are joining the lawsuit or activities surrounding a proposed county rent stabilization ordinance.

Less than a year ago Judien Langshaw, who is 33, moved into one of the building’s remodeled apartments that includes a fresh coat of paint and new-looking countertops, although a flimsily constructed sink cabinet door hangs on by a single hinge.

Langshaw squats down to show me how she’s fending off rodents with glue traps and an empty water bottle wrapped in duct tape that she uses to plug a hole under her sink. Her 4-year-old daughter is absorbed in play with two action figures from the Incredibles movie.

She pays a monthly rent of $983, significantly more than Nuñez. But the owner, after all, operates “like any business,” she says.

Langshaw recognizes her luck at having housing at all. “From here, you’re going into homelessness,” she says.

Related Topics:evictionsFeaturedrent control
Up Next