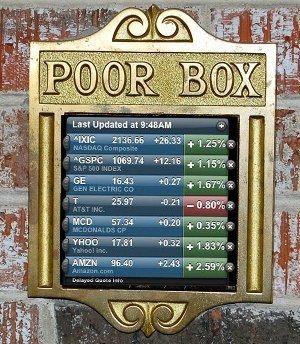 Few things have been a bigger buzz kill to the holiday season than the New York Times‘ epic investigative series questioning state and city government subsidies to big business. If you thought super-rich individuals were getting away with not paying their fair share (or any share) of taxes, the Times now lifts the veil from a system of corporate blackmail wherein companies are basically being given the tax dollars we pay to government. In exchange, these companies promise to do – nothing.

In the case of heavy industry, “nothing” means a manufacturing company will tell a locality that it may have to move its decades-old plant to another state or country unless it gets a whole lot of tax breaks, free sewage improvements and road repairs. In the case of Oliver Stone’s movie company and its plans to shoot a New York-specific story, it may mean the production browbeats NYC into forking over $10 million in tax credits; otherwise, it will move its shooting schedule to another town that also has a Wall Street, Empire State Building and Brooklyn Bridge. Or, for a fabulously wealthy tech company like Twitter, it’s as simple as tweeting to San Francisco to give it $22 million in payroll tax exemptions or it may move its headquarters somewhere else.

The recurring message in the Times series is that $80 billion is given away annually to companies while at the very same time school budgets are being slashed and public safety services cut. Corporations reply that they are obligated to their shareholders to drive the hardest bargain with states and local communities – overlooking the needs of the ultimate shareholder, the American taxpayer. Among the series’ key findings:

This last point is especially shocking. Several government sources told the Times they simply didn’t have the negotiating skills, actuary support or tools to verify the claims made by corporations, who come to the bargaining table with the resources of a small country. There is, in fact, no single database that tracks how much private corporations receive from individual government sources, while matching the business’ promises to their deeds. The Times‘ study of 150,000 such “incentive spending” agreements seems to be the first and only step made in that direction.

If this sounds bewildering, there is also much in the Times report to produce outrage. Caterpillar, for example, is immensely profitable yet has received more than $196 million in local subsidies since 2007 – while freezing its workers’ salaries in the name of remaining competitive. And, in a galling example of eating the hand that feeds it, the company has turned around and “chastised” states for not being business-friendly. Other companies have cynically disregarded cities’ desires to create “green” jobs; when Shreveport, Louisiana gave GM tax incentives and cut its gas bills, with the idea of getting the company to produce electric cars, GM took the subsidies but began building Hummers there instead. Finally, there are the instances in which a company tells a local government it is considering moving or expanding its present manufacturing facility elsewhere – even though it never entered the company’s head to do so.

Perhaps the truly scary thing about the Times series is its revelation that there seems to be virtually no proof that luring a business to a city (or simply keeping it there) by slashing its taxes or offering it other money-saving incentives has ever paid off for the affected community. Clearly the race to the bottom has become an Olympic track sport, as state and civic governments battle one another to prove that each is more willing than the rest to impoverish its citizens. San Francisco’s parks lost $12 million in funding, according to the Times‘ report, at the same time the city was subsidizing Twitter. The social networking company had its own lush private rooftop gardens and $1.1 billion from recent investors, but in 2011 was making noises to move. (Where, to San Bernardino?) Now, $22 million later, Twitter employees still enjoy their rooftop view of the Bay Area.

Bring Back the 40-Hour Work Week!