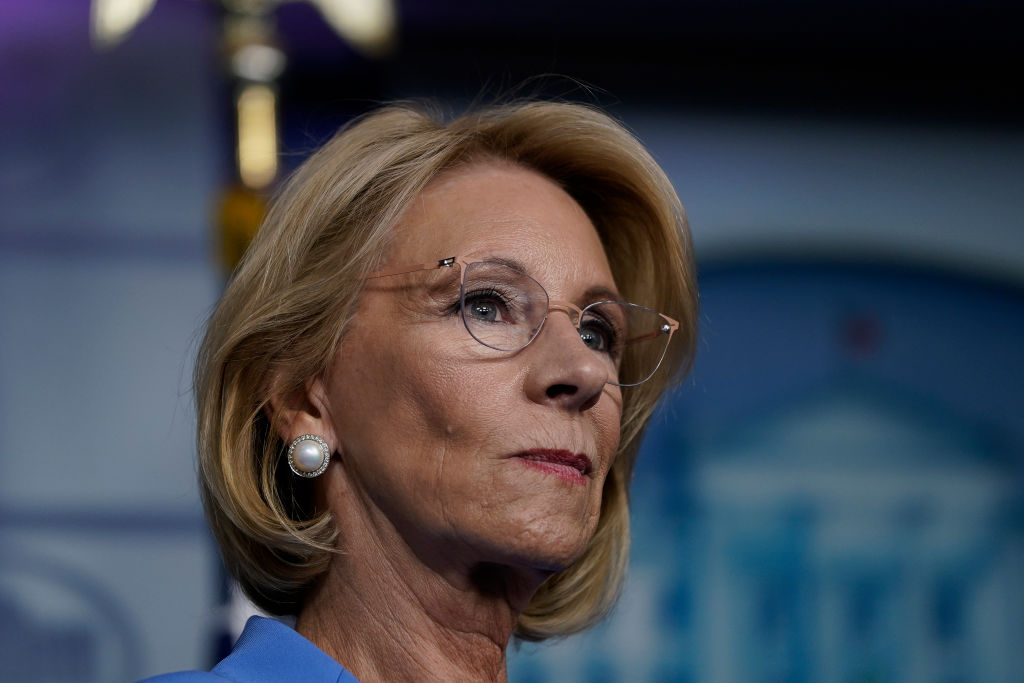 As COVID-19 has sent school districts scrambling to convert classroom learning to online instruction, and state governments have threatened to slash education budgets, charter school and private school advocates see an opportunity to siphon both federal relief money and students.

In an interview with right-wing talk show host Glenn Beck last month, Education Secretary Betsy DeVos said the COVID-19 crisis was an “opportunity to collectively look very seriously at the fact that K-12 education for too long has been very static and very stuck in one method of delivering and making instruction available.”

Other free-market advocates, including George Mason University’s Mercatus Center, which is funded by the libertarian Koch Family Foundations, are calling for deregulation of public schools and a dramatic expansion in online schooling. The Washington Policy Center, an affiliate of the Koch brothers-funded State Policy Network, argues that private and charter schools are best equipped to handle online learning, because they are “better equipped to innovate and caringly respond to the pressing needs of students.”

Private, religious, and virtual schools are getting a leg up from Betsy DeVos, who is diverting emergency federal education funding their way.

Whether or not private, religious and virtual schools are best equipped to serve students virtually, they are getting a leg up from DeVos, who is diverting additional emergency federal education funding their way.

The Coronavirus Aid, Relief and Economic Security Act, signed in late March, included $30 billion in education stabilization funding for institutions harmed by the COVID-19 shutdown, including approximately $14 billion for higher education, $13.2 billion to elementary and secondary schools, and the rest for state governments.

Its discretionary funding was intended for grants to be used by states most impacted by COVID-19, but Secretary DeVos announced a grant program that put some additional strings on the money. DeVos requires states to apply, using one of three categories which account for 60 percent of grant awards:

“DeVos’ ‘microgrants’ are nothing more than school vouchers by another name.”

According to Celeste Fernandez Busser, a spokesperson for the National Education Association (NEA), these categories would remove resources from schools that are already underfunded. “The new guidance could potentially mean that hundreds of millions of additional CARES Act funding would be redirected away from under-resourced public schools and diverted to private schools,” Busser said in an email. “DeVos’ ‘microgrants’ are nothing more than school vouchers by another name. It is unconscionable that DeVos has chosen to exploit this national public-health crisis to promote her personal agenda of privatizing public education,” Busser added. (Disclosure: The NEA is a financial supporter of this website.)

The CARES Act also established a Paycheck Protection Program, allowing small businesses to apply for grants to retain employees during the health crisis. Private schools and charters are eligible for PPP loans, regardless of the size of their endowment. CBS News reported that thousands of religious schools have received PPP loans as well.

Carol Burris, Executive Director of the Network for Public Education, a nonprofit advocacy group, says charter schools getting loans amounts to “double-dipping,” and puts them at an advantage over traditional public schools.

“The big money goes to the big (charter) chains, but the charter school funding stream, the same as public schools, has not changed. Government small business loans should be going to local shoe stores, where the parents work. Charter schools don’t need it.”

Liv Finne, director of the Washington Policy Center’s Center for Education, told Capital & Main that all schools should be helped in a crisis. “Poorer (private schools) like Catholic schools need it more. DeVos is thinking about private schools with low tuition who are just getting by.” Finne said that government money should not be given to institutions that don’t need it, but regarding DeVos’ microgrants, she’s in favor: “Should money be given to parents to choose their schools? I say yes.”

The Department of Treasury came under fire after some large companies received PPP loans, which were given on a first-come basis. A congressional oversight committee has been staffed, but companies are still required to self-certify that they meet requirements of PPP.

As Congress debates a new round of Covid-19 relief, charters and private school advocates continue to lobby for more, including direct tuition payments.

Finne and other charter advocates believe that hiccups with traditional schools going online, plus the longer experience of distance learning in charter schools, will make parents consider moving their kids to charters in the fall. There’s some anecdotal evidence that charter companies opened mid-year enrollment during the pandemic, and massive online content providers like K12 are attempting to lure parents from traditional schools with purportedly superior distance-learning skills. In fact, many charters and some traditional schools purchase modules from K12 and other giants like Connections Academy.

Burris warned that these schools are using fear. “They are counting on parents who will be afraid to send kids back to school in the fall, either because the schools will be sporadically open or because their kids will be subject to Covid-19 if they go back (to traditional schools).”

Studies have shown that online education exacerbates inequality by leaving low-income and struggling students behind.

But Kevin Welner, director of the National Education Policy Center, said that, budgets being equal, neither public schools, nor private schools, nor charters with online experience should have a leg up in offering online instruction.

“None of them have been doing online education well,” Welner said.

Studies have shown that online education exacerbates inequality, benefiting students who were already doing well, and letting struggling students fall further behind. Even pro-charter organizations like CREDO have acknowledged inadequacies of online charters.

“Also, the vast majority of charter schools are not online or even blended or hybrid. But they still are making their case that they’re responding better, in one way or another, than neighborhood public schools,” Welner said in an email.

Welner and other public-school supporters say that, while DeVos’ efforts to boost private, religious and charter schools during the pandemic may pay off for them in the short term, the big issue is not that they’re benefitting at the expense of public schools, but rather that public schools need much more money right now.

The Learning Policy Institute calculates that a 20% decrease in state funding would result in 450,000 school positions lost, or 12.2% of the nation’s education workforce.

“Essentially all Ed Stabilization funds from the CARES Act, or whatever is ultimately passed in the HEROES Act, will go to states keeping educators in the classroom and hopefully reducing layoffs, along with PPE, cleaning and the basic necessities of our new reality,” Busser said.

“These abuses (of DeVos) pale in comparison to the dire need for the federal government to address the state and local budgetary crises,” Welner said. “This is not the time to lay off teachers. We need even more resources for kids who are traumatized. Even the money in the federal packages gets us to the status quo, which is inadequate. We’ve been starving our schools for a very long time.”

Los Angeles in Turmoil: Images from a Crisis