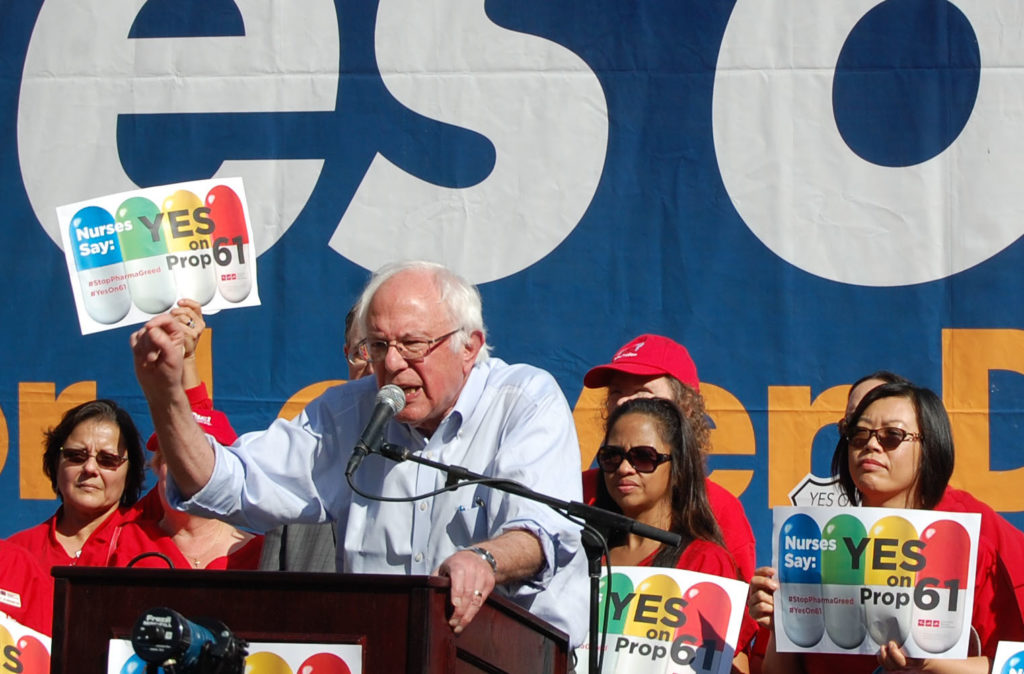 “This could be the shot heard round the world!” Vermont Senator Bernie Sanders told a Los Angeles rally held Monday in favor of Proposition 61. About 650 office workers, health-care activists and California nurses gathered that morning in Pershing Square to support the drug pricing initiative.

“[Drug companies],” the former Democratic presidential candidate said, “understand that a victory in California will not only lower prescription prices here — it will impact every state in the country.”

Proposition 61 would bar specific state agencies from paying more than the U.S. Department of Veterans Affairs for the same prescription drugs. The VA currently negotiates with drug companies for prices that are generally regarded as the lowest in the country. The California agencies affected spent $4.2 billion on prescription drugs in fiscal year 2014-15.

Sanders: Drug companies understand that a victory in CA will impact every state in the country.

“A bad situation is getting worse right now today,” Sanders told the crowd. “People are walking into a pharmacy, and they’re finding that the medicine that they used for 20 years, the price has doubled, the price has tripled. … Today, one out of five people who go to a doctor and gets a prescription is unable to afford that prescription. Now how crazy is that?”

The progressive leader has been at the forefront of congressional investigations into how pharmaceutical companies set prices. Last week he requested a federal probe into possible collusion between insulin manufacturers after a study of “shadow pricing” revealed that the cost of the drug more than tripled between 2002 and 2013, from $231 to $736 a year per patient.

A final pre-election Field poll on Friday declared the ballot race dead even, with 47 percent in favor, 47 percent against and six percent undecided. That’s a dramatic shift from just days before, when a Hoover Institution poll had Prop. 61 leading 51 to 24 percent, with 25 percent undecided.

The change likely reflects a $20.5 million, election-eve TV ad blitz attacking the measure that Big Pharma launched last week. That campaign budget alone dwarfed the $18 million raised by the groups pushing the proposition. The ads were paid for with roughly $22 million donated by pharmaceutical companies over the last month.

The No on Prop. 61 campaign — which calls Proposition 61 the “Deceptive ℞ Proposition“ — has capitalized on uncertainties surrounding implementation of the measure. Its talking points suggest that by disrupting the complex and murky web of negotiated pricing currently in place for governmental purchasers, Prop. 61 could actually increase drug costs for the VA or even trigger higher prices for Medi-Cal fee-for-services.

But speakers at the Monday rally, which included military veterans and labor organizers, seemed determined to call Big Pharma’s bluff.

According to Politico, Big Pharma has spent a total of $126 million to defeat the initiative, easily shattering the record for the most money ever contributed to one side of a California ballot measure. That number (which includes $17 million of debt carried on the No/Prop. 61 books) was gleefully seized on by Sanders as both a rallying cry for the gathering and as a reminder that the significance of the measure’s passage will reverberate far beyond whatever cost savings might be realized by affected state programs.

“Pharma knows that there’s a lot more at stake here than saving a billion dollars for the citizens of California,” San Fernando Valley Congressman Brad Sherman exhorted. “They spend $3 billion lobbying in Washington. They’ve stymied us. We’re in a position where the House won’t even consider having the VA model apply to Medicare. But if we would in California, that’s going to change the business model.”

Michael Weinstein, president of the AIDS Healthcare Foundation, which is financing the lion’s share of the Yes on Prop. 61 campaign and which cosponsored the rally, explained that Tuesday’s vote is just the beginning; passage of the initiative, he said, will “start a movement that’s going to sweep the nation.”

Los Angeles was Sanders’ fourth appearance in California in support of Prop. 61. He later flew to Sacramento, where he addressed his final Prop. 61 rally on the Capitol steps.

West Virginia Wants Its Water Back