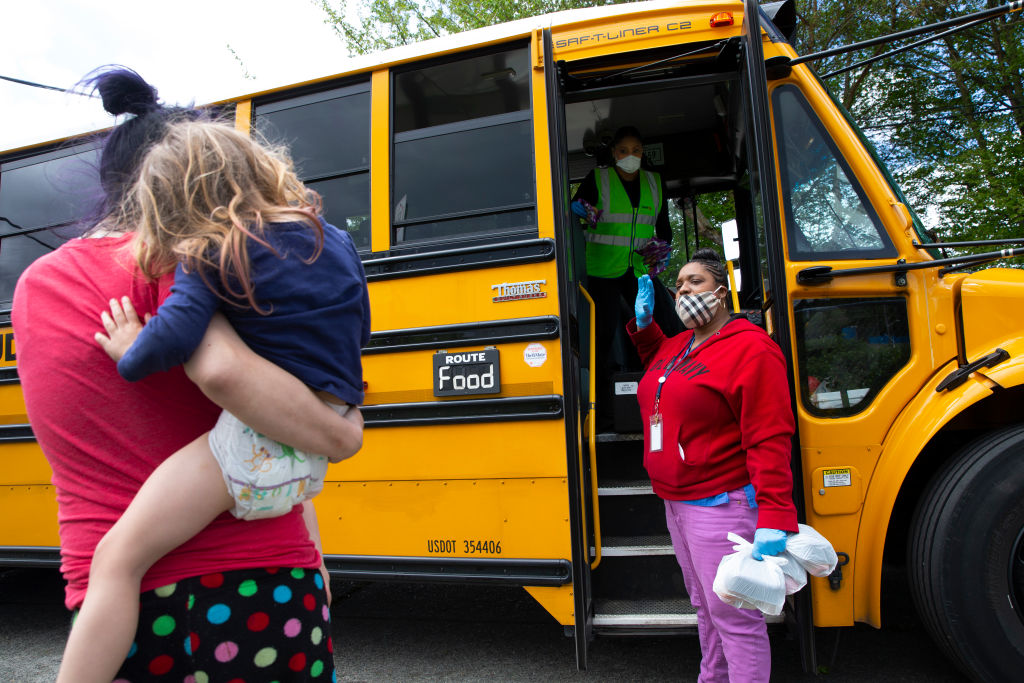 Teachers and education administrators sounded the alarms. The spouses and partners of 18 state governors issued pleas. Leadership on both sides of the political aisle brought pressure, some of it decidedly unsubtle. In the end, they combined to strong-arm the U.S. Department of Agriculture (USDA) into extending programs that help get food to the children of poor families in the midst of a pandemic.

What now? Well, sure: another dogfight to try to keep those programs going for the duration of the school year.

For months, the Centers for Disease Control has seen its credibility compromised and eroded by repeated political interference. Now the USDA is in the middle of a bizarre struggle in which nutrition plans for hungry kids – plans largely devoid of controversy – are repeatedly threatened with shuttering.

Last month the USDA claimed they had no authority to extend waivers that allowed school districts to give free food to students.

The most recent close call came last month, when Secretary of Agriculture Sonny Perdue claimed he had no authority to extend past Aug. 31 a suite of waivers that allowed school districts to give food to kids – regardless of their ability to pay – through the Summer Food Service Program and the Seamless Summer Option. What it meant was that, starting in September, many of the estimated 30 million children who eat school food would have to revert to a system under which they applied to be considered for free or reduced-price meals, or paid full price.

Under heavy fire, Perdue reversed his position. On the final day before the waivers were to end, the USDA announced that it would continue the waivers through the end of 2020. Said Perdue, “As our nation reopens and people return to work, it remains critical our children continue to receive safe, healthy and nutritious food.”

Apart from the fact that the Trump administration has tried to roll back Obama-era strengthening of nutrition standards for school food (a federal district judge blocked that attempt), Perdue’s words belied an ignorance of some basic facts. Many of the kids who need meals are from families that have long since been back at work, often doing essential jobs – food service, sanitation, transportation – that take long hours but still don’t pay enough to buy adequate groceries and other basic supplies.

Even before the pandemic, some 30 million U.S. students received free or reduced-price meals through the National School Lunch Program.

The support that Perdue was ready to let expire was really an expansion of the ongoing attempt in America to feed its schoolchildren. Some 30 million students in the U.S. receive either free or reduced-price meals through the National School Lunch Program, which reimburses local districts for the money they spend to prepare and distribute meals. School districts normally track which students qualify for which programs, and set up ways to collect payments from those who are not entitled to free food.

When COVID-19 hit the country, the USDA used powers granted under the Families First Coronavirus Response Act to allow schools and districts much more leeway in deciding how to provide that food. Its waivers made the meals free to any student who wanted them, with no questions asked, and allowed students to obtain meals even at schools or distribution centers outside their own districts. They also allowed for several days’ worth of meals to be picked up at one time, if districts wanted to offer that option.

The programs aren’t perfect; the advocacy group No Kid Hungry estimates that such efforts still may reach only 16 percent of the kids who need food help during the summer, in part because they’re physically not at school to be fed and the logistics of delivery get tougher. It’s difficult to know what that percentage will look like in 2020, when many schools have been closed since March and many lower-income essential workers are not home during the day to collect school meals for their children.

As of Sept. 21, the L.A. Unified School District, the nation’s second largest, had handed out nearly 62 million meals.

But in places like Los Angeles, the effect is still staggering. As of Sept. 21, the L.A. Unified School District, the nation’s second largest, had handed out nearly 62 million meals, according to Superintendent Austin Beutner. About 80 percent of L.A. Unified’s students are from low-income families, and they may receive multiple meals a day through the program.

“These programs are all very helpful, and they’re designed to be very helpful,” said Kirsten Tobey, co-founder of Oakland-based Revolution Foods, which focuses on delivering high-nutrition whole foods to schools. By eliminating the requirement to prove financial need, the USDA made it possible for districts to spend more time on their primary mission: getting meals to the students and families who need them.

Perdue remarked several times about the cost of the programs, suggesting that they would run out of money, although when he ultimately announced the extension, he did so without any new funding. (Congress authorizes the funding, not the USDA.) Perdue also suggested that families could get help elsewhere, writing, in part, “Americans are a generous people, and there are already opportunities for breakfast, lunch, and snacks, and weekend meals for children in need.

Without an extension of the waivers through the end of the school year, many families will again be facing food insecurity.

It is precisely that sort of thinking that has food insecurity experts and educators concerned for what will happen after Dec. 31, since “we know that many schools are not going to be open on Jan. 1, 2021,” Tobey said. Without an extension of the waivers through the end of the school year, many families will again be stuck, with parents working, kids undergoing distance learning and decent meals hard to come by.

Congress has yet to act on a new coronavirus relief bill, and as Perdue has said, the current funding will run out eventually. But the push to keep it going has resulted in a coalition that is both broad and deep.

That coalition features Democratic and Republican leadership and recently included an extraordinary direct appeal to Perdue from Sen. Pat Roberts (R-Kan.), who chairs the Senate Committee on Agriculture, Nutrition and Forestry. Roberts’ letter was co-signed by 19 Republican senators, who asked that Perdue “continue utilizing child nutrition program waivers that Congress provided,” reminding the USDA head of who was actually in charge.

Both the USDA and congressional leadership also received a letter from the spouses and partners of 18 governors. “Our children are our greatest resource, and there is no more necessary action than safeguarding their access to life-sustaining meals,” it read. Those words may need to be repeated, ad nauseam, as the next waiver period draws to a close.